A case of Bier spots with bilateral nevoid telangiectasia

A 65-year-old woman complained of multiple hypochromatic macules on the lower limbs for four years. She was asymptomatic and denied a history of rheumatic, cardiovascular, hematologic or hepatic diseases, or any previous surgery. She neither had any family history of similar lesions. Her physical examination revealed numerous suborbicular white macules against a mild erythematous background on the extensor surface of the lower limbs [Figure - 1]a. The macules were comparatively clear under Wood's light [Figure - 1]b and were prominent in the vertical position of the limbs, while disappeared in the horizontal position [Figure - 2]a. Punctate telangiectasias were seen at the center of white macules. These remained unchanged in the horizontal position [Figure - 2]a but faded significantly after the compression. The laboratory tests, including blood cell count, c-reactive protein, liver and renal function tests, antibodies to hepatitis B and C, testosterone, dehydroepiandrosterone, estradiol, luteinizing hormone, follicle-stimulating hormone, prolactin, sex hormone-binding globulin were normal. The ultrasonography of the arteries and veins of the lower limbs was also normal. Dermoscopy (Dermlite Foto II Pro 3Gen, contact, non-polarized, ×20) revealed significant decrease or disappearance of vessels in the white macules while the surrounding skin revealed numerous reticular vessels [Figure - 2]b. “Spider nevi”-like telangiectasias were also seen in the middle of white macules, which faded significantly after the compression [Figure - 2]b and [Figure - 2]c. Based on the typical clinical manifestations and dermoscopic features, a diagnosis of Bier spots with bilateral nevoid telangiectasia was established.

Bier spots are benign, physiologic, vascular anomaly, with less than 100 cases reported in the English literature. It was first described by August Bier in 1898. Bier spots are usually found in people aged 20–40 years. The clinical manifestations include asymptomatic, multiple, small, irregular, anemic macules on the extensor surface of limbs, predominantly on the upper extremities and rarely on the lower limbs and trunk. The incidence is almost equal in men and women. These are similar to other white macules, such as vitiligo, pityriasis versicolor, nevus anemicus, achromic nevus and post-inflammatory hypopigmentation. The pathogenesis of this condition remains obscure. Bier spots have been reported in association with various conditions such as scleroderma renal crisis, pregnancy, cryoglobulinemia, coarctation of the aorta, hypoplasia of the aorta, palmar hyperhidrosis, tachycardia, varicosity, lichen planus, alopecia areata, Peutz-Jeghers syndrome and heredity. Some scholars considered that the disease was caused by abnormal vasoconstriction of the ascending arterioles, leading to venoconstriction in pale areas and venodilation in erythematous areas.

Bier spots accompanied by nevoid telangiectasia are extremely rare. Only 3 cases have been reported to date. In 2011, Tan and Zhu reported the first case of unilateral nevoid telangiectasia superimposed on bier spots and considered that this dichotomy of vascular phenomena was a new type of vascular twin spotting.[4] Subsequently, Pinho et al. and Lang et al. reported similar cases separately.[5],[6] None of these patients had hepatitis, sex hormone abnormality or other diseases [Table - 1]. The cause of this condition was unknown. Bier spots with bilateral nevoid telangiectasia have not been reported yet. These two opposite kinds of vascular lesions occur in the same region simultaneously, as a special type of vascular twin spotting. This phenomenon occurs due to the local vasomotor dysfunction, but the intrinsic pathogenesis and triggering factors are still to be clarified. 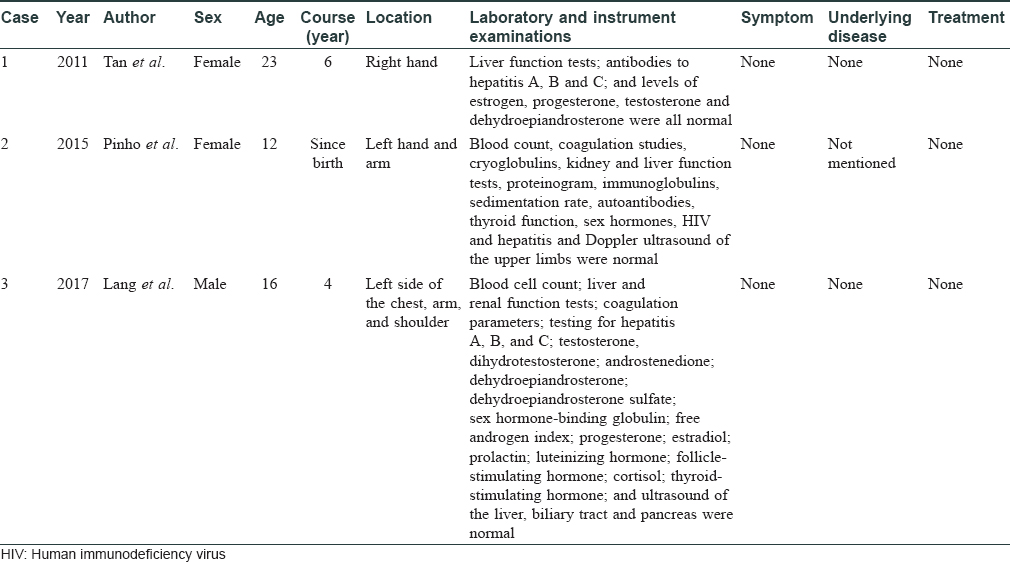 Table 1: Bier spots with nevoid telangiectasia reported in the literature

The patient in the present case had no underlying disease or symptoms of discomfort, and she refused any treatment.