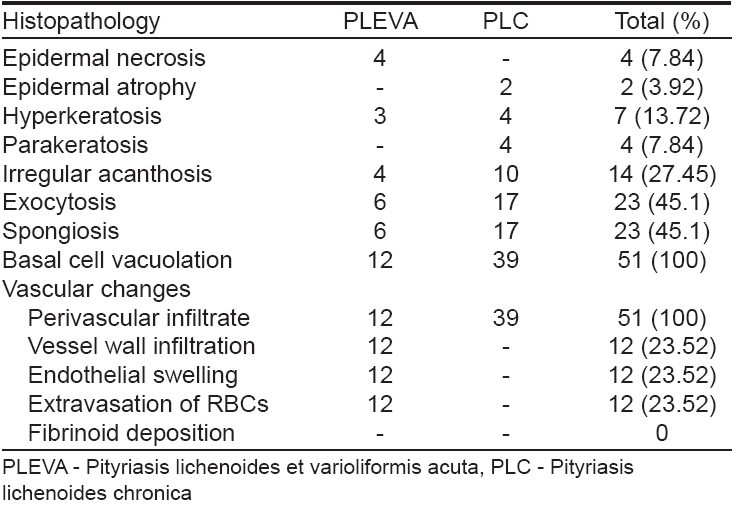 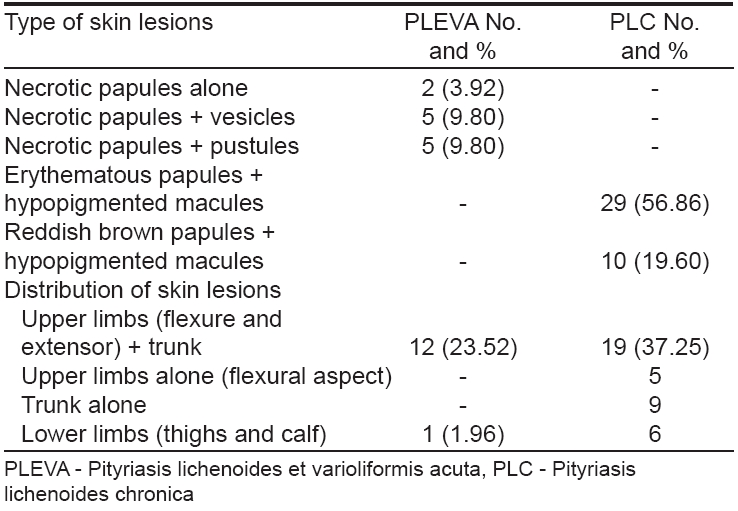 Morphology and distribution of skin lesions

Morphology and distribution of skin lesions

Pityriasis lichenoides (PC) is a papulosquamous disorder of unknown etiology with acute and chronic presentations. [1] Pityriasis lichenoides chronica (PLC) is considered as mild and chronic form of the disease whereas pityriasis lichenoides et varioliformis acuta (PLEVA) is the acute form of the disease. [2] Even though the exact etiology is unknown, antibodies against toxoplasma, cytomegalovirus, parvovirus, adenovirus and Epstein Barr virus have been demonstrated in some studies. [3] Pityriasis lichenoides is now considered a lymphocytic vasculitis and removed from the parapsoriasis group of disorders. [4],[5] But lack of any definite etiology and absence of vessel wall damage makes it difficult to include the condition under any nosological classification. In many cases of PLEVA and PLC, the diagnosis is made after clinicopathologic correlation. Keeping these factors in mind, we decided to undertake this clinicopathologic study in our department.

This was a 3 year (2001-2004) retrospective and prospective, descriptive study. All patients clinically diagnosed with PLEVA or PLC were enrolled into the study. After a thorough history and examination, the patients were subjected to blood counts, urine analysis, liver and renal function tests, Mantoux test, chest X-ray and a serological test to rule out syphilis. Skin biopsy taken from all the patients after obtaining informed consent, was subjected to hematoxylin and eosin staining. The parameters taken for histopathological diagnosis were exocytosis by red blood cells (RBCs) or mononuclear cells, spongiosis, basal cell vacuolation / degeneration and perivascular infiltrate along with mononuclear infiltration of vessel walls, endothelial swelling, extravasation of RBCs and fibrinoid deposition within vessel walls. Basal cell vacuolation and perivascular infiltrate were mandatory parameters for diagnosis of PL. [2, 4, 5] The other histopathological features mentioned were taken as additional or contributory parameters. Cases clinically diagnosed as PLEVA / PLC but not having basal cell degeneration and peri-vascular infiltrate were excluded from the study.

There were 51 cases in the 3-year study period that were diagnosed as pityriasis lichenoides based on the clinical and histopathological features. This constitutes 0.34% of all the new outpatient (OP) cases in the corresponding study period. The male/female ratio was approximately 1.4:1 there being 30 males (58.82%) and 21 females (41.18%) enrolled for this study. There were 39 cases of PLC (76.47%) and 12 cases of PLEVA (23.52%). Among the PLC cases, there were 21 males and 18 females, the male/female ratio being approximately 1.16:1. Among the PLEVA cases, there were seven females and five males, the female/male ratio being 1.4: 1. The age group distribution is given in [Table - 1]. The age group 11-20 constituted the maximum number of cases 14, (27.45%). The youngest patient was seven years of age and the oldest patient 54 years old. The mean duration of illness was 1.6 years. The shortest duration of illness was one month seen in a case of PLEVA and the longest duration was eight years seen in a case of PLC. The morphology and distribution of the skin lesions of PLC and PLEVA are given in [Table - 2]. Five cases (9.80%) of PLEVA had constitutional symptoms. Neutrophilia and elevated erythrocyte sedimentation rate (ESR) (more than 30 mm/hour) were noted in five (9.80%) of the PLEVA cases. All the other investigations were normal. The histopathological features are given in [Table - 3]. Epidermal necrosis was seen in only four cases of PLEVA (7.84%) and in none of the PLC cases. The characteristic wedge-shaped infiltrate of PLEVA extending downwards was only seen in four cases (7.84%). Six cases of PLEVA (11.76%) showed exocytosis by both RBCs and mononuclear cells, while two cases (3.92%) of PLC showed exocytosis only by RBCs; the remaining 15 cases (29.41%) showed exocytosis by mononuclear cells [Figure - 1]. All the 12 cases of PLEVA (23.52%) showed extensive basal cell vacuolation compared to mild basal cell vacuolation in PLC. All the cases of PLEVA (23.52%) showed evidence of lymphocytic vasculitis [Figure - 2] but without vessel wall damage or fibrinoid deposition.

The 51 cases encountered by us in a 3 year period indicate that pityriasis lichenoides is not rare in Indians. The male/female ratio of 1.4:1 in this study is less than that reported in other studies where it was 2:1. [5] While there is equal incidence reported in the literature of PLEVA in both sexes, in our study there was a slight female preponderance (1.21:1). The maximum number of cases seen in the younger age group in this study is in general conformance with other studies. [6] The mean duration of illness being 1.6 years gives credence to the fact that PL is a chronic disorder. The severe aggressive type of PLEVA, -febrile ulcerative Mucha-Habermann disease (FUMHD) was not seen in our study. This severe variant of PLEVA can cause fatalities. [7] None of the patients in this study had any systemic abnormalities other than raised ESR and neutrophilia seen in five cases of PLEVA.

Prominent basal cell degeneration and perivascular infiltrate were the histological hallmarks seen in this study. Although exocytosis and spongiosis are considered as important features of PL, in this study they were present in only 23 cases. All the cases of PLEVA showed intense perivascular infiltrate, vessel wall infiltration by mononuclear cells, endothelial swelling and extravasation of RBCs. However, there was lack of vessel wall damage and no fibrinoid deposition was seen in the vessel walls indicating PLEVA is not a true vasculitis. On the other hand, all the cases of PLC showed subtle histopathological changes in the form of mild basal cell vacuolation and a mild perivascular infiltrate. No other blood vessel changes of lymphocytic vasculitis as seen in PLEVA [Table - 3] were seen in PLC. None of the cases in the present study had any atypical cells in the infiltrate. Lymphomatoid papulosis may have a large number of CD30+ cells in the infiltrate, while there are very few in PL. [8],[9] Some patients clinically present as PL but may have a lymphomatoid histological picture. Such cases are called as "lymphomatoid pityriasis lichenoides". [10] None of the cases in the present study evolved into cutaneous T-cell lymphoma (CTCL), though there are reports of PLC occurring in association with CTCL. [11]

A literature search did not find any studies of PL done in India other than isolated case reports. [12] The presentation of PLC with only hypopigmented macules once the papules have disappeared may prompt a dermatologist to misdiagnose the case as postinflammatory hypopigmentation. PLC should definitely be included in the differential diagnosis in such cases and a skin biopsy should be done.