A cross-sectional study of spontaneous repigmentation in vitiligo

This was a cross-sectional observational study which was undertaken in patients with vitiligo attending the outpatient department of dermatology and venereology at All India Institute of Medical Sciences, New Delhi, over a period of 2 years (June 2015–June 2017). Patients with a clinical diagnosis of vitiligo, both non-segmental and segmental, irrespective of their age and gender were included in the study. The study protocol was approved by the institutional ethics committee and all the participants gave written informed consent.

Detailed clinical history was taken from the patient or the parents, in case of children <18 years of age. It included demographic data, disease characteristics (duration of disease, mode of onset, site of onset), disease evolution, presence of Koebner's phenomenon, leukotrichia, trigger factors (trauma, drugs, infections, stress, or any other), treatment history (chronological history of periods when treatment was started and discontinued, length of treatment-free period, nature of treatment taken, and response to treatment), periods of stability and activity in disease course, psychosocial history, organ-specific history (thyroid disorders, eye problems, ear problems, premature greying of hair, atopy, alopecia areata, and any other), and relevant past and family history using a predesigned proforma.

Spontaneous repigmentation was defined as repigmentation occurring in existing vitiligo lesions while the patient was not taking any topical or systemic medication or phototherapy for at least 3 months. This duration has been used as a washout period in some therapeutic studies.[8],[9] We asked about the time of occurrence of spontaneous repigmentation in the disease course, site of repigmentation, extent, color, and pattern of repigmentation, whether repigmentation occurred during the stable or active phase of disease, and whether it persisted or was lost. Stable disease was defined as the absence of development of new lesions or progression of existing lesions for at least 3 months, irrespective of treatment status, a definition that has also been used by other authors.[10] The area of the repigmented surface was calculated by estimating the diameter (d) of the repigmented patches (assuming the patches to be circular) and calculating the area by formula, area = π*(d/2)[2]. If macules which had repigmented spontaneously were discernible at presentation to us, we examined them and recorded our clinical findings.

A total of 200 patients were screened, of whom 33 patients could not be evaluated for spontaneous repigmentation as they had had never been off treatment. Data on the remaining 167 patients are presented below.

Sociodemographic and clinical profile of the patients

Overall, spontaneous repigmentation occurred as early as 3 months to as late as 47 years after the onset of vitiligo (mean, 8.7 ± 9.5 years; median, 6.25 years).

In most patients who repigmented spontaneously (26 patients, 72.2%), the color of repigmentation matched well with normal skin color, while it was lighter in 4 (11.1%) patients and darker in 6 (16.7%) patients.

The most common pattern of spontaneous repigmentation was diffuse in 20 (55.6%) patients, followed by perifollicular in 16 (44.4%) patients. No patient showed marginal repigmentation.

The mean duration of the disease was significantly longer in patients with spontaneous repigmentation (n = 36; mean, 9.9 ± 9.5 years) in comparison to patients who did not repigment spontaneously (n = 131; mean, 4.1 ± 6.5 years) (P = 0.005). They also had a significantly greater mean body surface area involved with vitiligo (mean, 14.9 ± 26.3% vs 4.2 ± 7.6%; P = 0.0001). A family history of vitiligo was more frequent in this group and the difference approached statistical significance (38.9% vs 21.4%; P = 0.07). However, there was no association with age, sex, age at onset, mode of onset, presence or absence of Koebner's phenomenon, duration of sun exposure every day, personal history of atopy or thyroid disease and type of vitiligo (segmental/non-segmental/mixed) [Table - 2]. 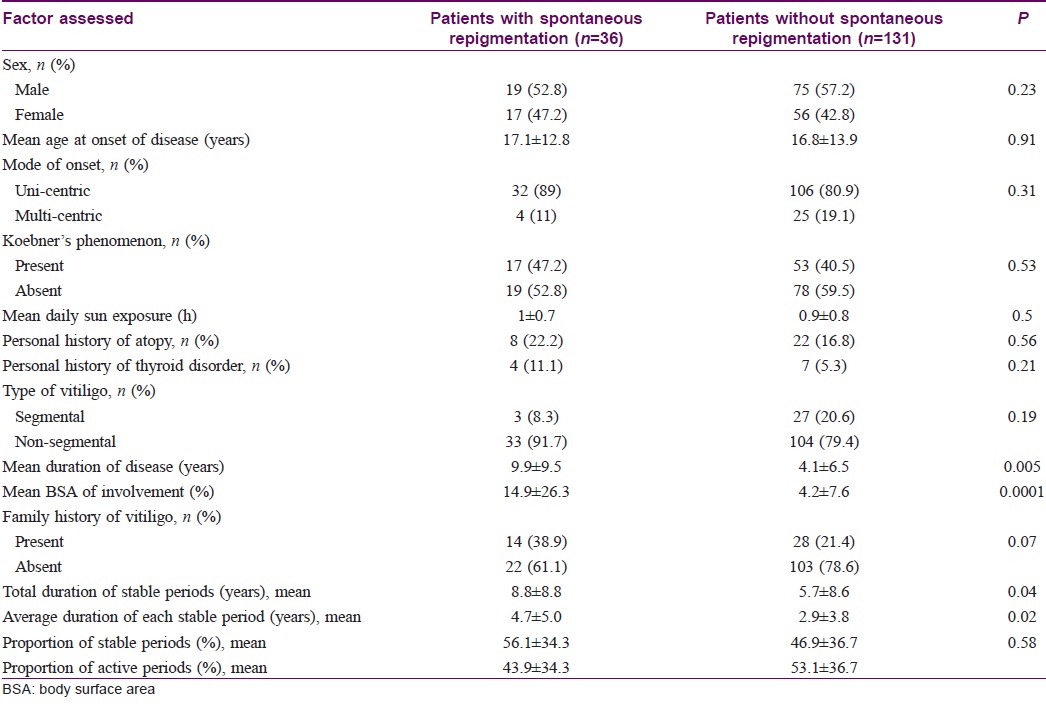 Table 2: Assessment of various factors in relation to spontaneous repigmentation

Table 3: Probability of development of spontaneous repigmentation with increase in number of stable periods

Diffuse pattern was the commonest (20, 55.6%) observed among our patients with spontaneous repigmentation. This was in contrast to the finding of Ho et al. who found that follicular repigmentation was the most common pattern (11, 37%) in placebo-treated sites in their study.[21]

In most patients (33, 91.7%), spontaneous repigmentation persisted for at least 2 months to as long as 27 years (mean, 4.4 ± 6.2 years; median, 2 years); this happened even though new patches developed and other patches extended in size elsewhere on the skin. This persistence of repigmentation in spite of disease activity has also been described following medical and surgical interventions.[22],[23]

Relapse in vitiligo has been seen to occur in 40%–50% of patients 2 years after receiving NBUVB therapy[24] and in 5%–20% after autologous epidermal grafting.[23] In our study, disease activity recurred in all patients with spontaneous repigmentation after 3 months to 24 years (mean, 5.9 ± 8.3 years, median 2.5 years) but the majority of lesions which had pigmented spontaneously remained pigmented. However, our hospital-based study may have excluded patients who did not relapse and consequently did not come to us.

We did not find any association of age, sex, age at onset, mode of onset, presence or absence of Koebner's phenomenon, duration of daily sun exposure, personal history of atopy or thyroid disease, and type of vitiligo (segmental/non-segmental/mixed) with spontaneous repigmentation. Although younger age of onset and sun exposure were mentioned as favorable factors for spontaneous repigmentation, we did not observe this in our patients.[25]

Spontaneous repigmentation was commoner both in patients with a greater duration and extent of disease. Although this association appears counterintuitive, a possible explanation is that as the duration and extent of disease increase, so does the scope and opportunity for spontaneous repigmentation; however, other unrecognized factors may also play a role.

Our study has several limitations. The information we gathered was based entirely on the patients' recollection of the evolution of disease, although in two patients we were able to examine previous photographs and it corroborated with patients' history. Vitiligo usually has a strong psychosocial impact because of which many patients are likely to remember even minute changes in disease activity, somewhat lessening the impact of this limitation. A prospective study with serial photographs would provide more objective evidence of spontaneous repigmentation. Another limitation was related to the hospital setting of our study. Patients who had significant repigmentation and/or stable disease may not have reported to us as often as those with progressive or persistent disease. This could possibly lead to an underestimation of these phenomena. A study conducted in a community setting would be required to overcome this bias.