A longitudinal study of consistency in diagnostic accuracy of teledermatology tools

Background: Diagnostic accuracy (DA) is an outcome measure to assess the feasibility of teledermatology tools. Despite ample data with variable DA values, no study has examined the aggregate DA value obtained from the available studies and observed its consistency over a period of time. This kind of a longitudinal study about teledermatology will be necessary to check its usefulness and plan for further implementation. Aims: To observe the DA trend over a period of 15 years (1997-2011). Methods: Only those studies (n = 59) using a single tool for general, tertiary, and subspecialty teledermatology practice were included to obtain the DA values. Studies were graded based on the number of subjects and gold standard comparison between teledermatologist and clinical dermatologist (face-to-face examination). Results: This analysis sought to identify the DA trend was carried out by evaluating 17 store and forward teledermatology (SAFT) based and 8 Video conference (VC) tool-based studies with 2385 and 1305 patients respectively, in comparison with the gold-standard assessment. The average DA was 73.35% ± 14.87% for SAFT and 70.37% ± 7.01% for VC. One sample t-test analysis with 100% accuracy as standard value revealed 28% deficiency for SAFT (t = 7.925; P = 0.000) and 30% deficiency for VC (t = 11.955; P = 0.000). Kruskall-Wallis test confirmed the consistency of DA values in the SAFT (χ2 = 1.852, P = 0.763) tool. Conclusion: SAFT and VC were adequately validated on a large number of patients by various feasibility studies with the gold standard (face-to-face) comparison between teledermatologists and clinical dermatologists. The DA of SAFT was good, stable over the 15 years and comparable to VC. Health-care providers need to plan for appropriate utility of SAFT either alone or in combination with VC to implement and deliver teledermatology care in India.
Keywords: Diagnostic accuracy, store-and-forward, teledermatology, video conference

The term "teledermatology" was coined by Prednia and Brown in 1994. [1] In 2001, Edey and Wooten [2] reviewed the pros and cons of both store and forward teledermatology (SAFT) and video conference (VC) tools. Huntley and Smith [3] in 2002 underscored the importance of internet and its role to pool experts′ opinion for difficult to manage cases. Braun et al.[4] demonstrated telemedical wound care using the mobile phones. Besides, various traditional reviews [5],[6],[7] have contributed to the insights into teledermatology. In 2008, Kanthraj [5] proposed the classification of teledermatology practice (TP). A revised classification was presented in 2011 [6] to incorporate tertiary teledermatology. Teledermatologists like Emnovic et al, [8] Warhaw et al.[9] and Van der Heijden et al.[10] have systematically reviewed and summarized the application of VC, SAFT and tertiary teledermatology.

A successful implementation of TP in a given health-care setting depends on technical feasibility of a teledermatology tool (TT) and factors like patient and physician willingness and satisfaction for the technology. [11] The competence of TTs is demonstrated in a clinical setting by feasibility studies. The diagnostic accuracy (DA) is an outcome measure obtained from a feasibility study that evaluates a teledermatology tool when a teledermatologist diagnosis is compared with a face-to-face examination by a clinical dermatologist (gold standard) followed by the statistical analysis (kappa value) of the data.

The steps entailed in the study were identification of studies with a single TT for general, tertiary, pediatrics and geriatrics teledermatology care, addressing dermatological conditions of general out-patient setting that are diagnosed mostly by spot examination. The purpose of this study was to compare the TT with reference to a gold standard (face-to-face examination) and we did not focus on the type of case mix involved in each study. All the 328 articles in PubMed obtained after using the search term "teledermatology" and "TP" were categorized as (a) 105 studies (b) 36 surveys (c) and 187 other than study or survey articles. The inclusion and exclusion of articles are shown in [Figure - 1]. Furthermore, in these 97 studies, 59 studies assessing the DA of single TT used for diagnostic purpose were included. The 38 studies were excluded based on the following decisive factors: (a) combination of TTs used for diagnostic purpose (13 studies) as the combination of tools would interfere in the proper assessment of a single tool. (b) Studies focusing on a single clinical entity (16 studies) (c) comparison between two TTs (4 studies) and (d) non-English articles (5 studies). Studies that employed additional or special TT like teledermoscopy were excluded.

Table 2: Distribution of studies with gold standard comparison on various teledermatology tools and summary of the number of patients and their average diagnostic accuracy

Author, year of publication, number of subjects, gold standard comparison between teledermatologist versus clinical dermatologist and DA were noted from each study with respect to each TTs and analysis of DA trend over a period of time (15 years), from 1997 to 2011 was performed. They are summarized in [Table - 1].

The DA trend of a TT over a 15 year period

Grade 1 and 2 studies were included for analysis. The studies were arranged accordingly in the chronological year in which they were published. Number of studies, enrolled patients and DA were noted for a consecutive 3 year period up to 15 years (1997-2011) and the DA trend was analyzed.

The analysis of various studies on TTs, number of studies, patients, and their average DA values are shown in [Table - 2].

Comparison of DA of SAFT, VC versus 100% accuracy as standard value 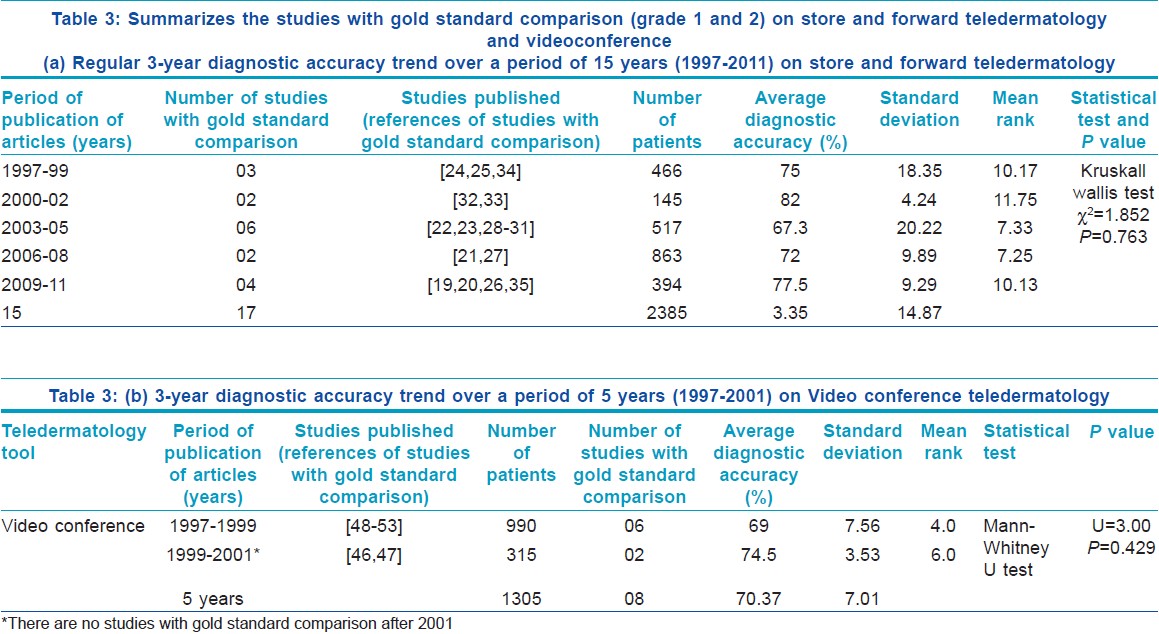 The concept of DA itself has certain pitfalls especially in the manner in which it was reported - variation in the level of training of both the referring physician and the teledermatologist, inter observer variability, and percentage agreement/kappa statistics.

There were no uniform standards followed in the methodology to conduct feasibility studies. Discrepancy to capture images, camera resolution, inter-observer variation, difference in training and expertise on the subject may explain the DA variation. The clarity of images, speed of the internet and rapidity of teleconsultation has improved compared to those used in studies of 10 years back. The wide variation in DA margin may be minimized by the following measures: (a) comparison with a gold standard face-to-face examination (b) diagnosis made by teledermatologist should be compared with a clinical dermatologist c) adherence to the standards proposed by American teledermatology association and practice guidelines [72] that ensure a minimum standard for TP, uniformity in the methodology with reproducible results.

Only small studies were available for MT and therefore, extensive studies are required in this field. Most of the studies on ODF [60],[61],[62],[63],[64],[65],[66],[67],[68] were retrospective analysis. However, ODF is a modification of SAFT and the principles of SAFT matches exactly with ODF. There were studies with the gold standard comparison on SAFT adjudicating that SAFT is a time-tested technology for the past 15 years with better DA as analyzed in the present study and separate studies on technical feasibility of ODF may not be required.

There are sparse studies with the gold standard comparison that encourage sub-specialty care like pediatric [69],[70] and geriatric [71] teledermatology. Research in these areas would facilitate the implementation of teledermatology program in a health-care setting. The 15 years (1997-2011) data analysis confirmed SAFT and VC were the tools evaluated by studies with the gold standard comparison on a significant number of patients with good DA. SAFT is a regularly validated tool from past one and half decades with a consistent DA when compared to VC. The DA is almost similar in both SAFT and VC; however, SAFT has a consistent DA and it is an easy, convenient and cost-effective [73],[74],[75] tool that makes it the most widely used technology.

The stable DA despite the technical advances in this field suggests dermatological conditions that can be diagnosed by face-to-face examination be able to diagnosed by teledermatology. Though, VC has a consistent and good DA, general practitioners, dermatologists and patients are required for simultaneous interaction making this sort of practice a more time consuming tool. SAFT is being used as an effective alternative to VC and dermatologists are using SAFT frequently and consistently for research and practice.

The current longitudinal study observed that feasibility studies have shown both SAFT and VC tools were adequately validated with large feasibility studies involving ample number of patients with the gold standard comparison between teledermatologist and clinical dermatologists. The DA values for both SAFT (average 73.35%) and VC (average 70.37%) are good and comparable. Hence, these two tools are feasible for TP. SAFT is simple and easy to use. However, it has a limitation of absence of patient interaction with dermatologists, which is practiced by videoconference. A combination of SAFT and VC-hybrid teledermatology can improve DA, provide better patient satisfaction and disadvantages of SAFT or VC used alone can be overcome by this combination of SAFT and VC.

In conclusion, the present study assessed various feasibility studies of single TT addressing dermatological conditions of general out-patient setting that are diagnosed mostly by spot examination and excluded studies addressing combination of TTs like teledermoscopy. Pigmented skin lesions like melanoma require teledermosopy for their management. The burden of pigmented skin lesions as a community health problem is negligible in India compared to the west. Therefore, this study has significant relevance to Indian context as Indian teledermatology rarely requires teledermoscopy compared to the west. The data analysis of this study suggests basic TTs like SAFT provides best DA. Health-care providers need to plan for appropriate utility of SAFT either alone or in combination with VC to implement and deliver teledermatology care in India.

Author is thankful to Dr. Lancy D′Souza, Reader in Psychology, Maharaja′s College, University of Mysore, Mysore, and Karnataka, India for statistical analysis of the data. Mr. Coimbatore Krishnan Muralidharan, Mr. Manjesh Karigowda, and Mr. Avinash Mysore for secretarial assistance involved in this project. Author is thankful to the Indian society of teledermatology (INSTED) and Special interest group (SIG) teledermatology of the Indian Association of Dermatologists, Venereologists and Leprologists (IADVL) and J. S. S. University, Mysore for their constant academic encouragement rendered in completion of this project.