Background: Atopic dermatitis is a chronic, relapsing disorder associated with significant morbidity. Growth retardation is known to occur in children affected with atopic dermatitis. However, there is not enough Indian data for this disorder. Aims: We conducted a longitudinal study to look for the effect of atopic dermatitis on growth attainment of Indian preschool children. Methods: The growth patterns of 62 children, aged 3-5 years and suffering from atopic dermatitis were studied in terms of body weight, height and head circumference. Sixty-eight normal healthy children matched for age, sex and socioeconomic status were taken as controls. Every child was followed up at intervals of three months following a mixed longitudinal study design for the duration of one year. Severity of the disease was determined by the scoring atopic dermatitis (SCORAD) index. Results: Growth velocities were lower in patients than in controls. Mean changes in body weight of patients of both sexes showed close similarity to controls. Mean values for height and head circumference were found to be significantly lower in girls than in the girls of the control group at majority of the age levels. In contrast, in boys, these values for the patients remained comparable or higher than in the boys of the control group at some of the ages. Girls had comparatively more severe disease than boys and they had lower values than boys for all the growth parameters assessed. Conclusion: Growth retardation was observed among children with a more severe form of the disease. Height of the affected children was compromised mostly, though a tendency for catch-up growth was observed. Severe forms of atopic dermatitis may impair a child's linear growth temporarily.
Keywords: Atopic dermatitis, Growth retardation, Preschool children

Table 5: Mean and SD of SCORAD Index in patients

Table 5: Mean and SD of SCORAD Index in patients

Table 2: Mean and SD for height (cm) of study subjects

Table 2: Mean and SD for height (cm) of study subjects 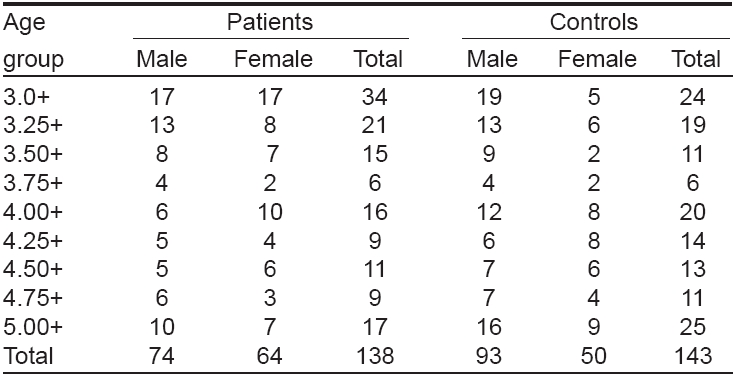 Atopic dermatitis (AD) is a chronic, itchy, relapsing disorder contributing to significant morbidity. It adversely affects the quality of life of the children suffering from it. [1] An association of allergic diseases with growth retardation in the form of weight loss and suppression of skeletal maturation, had been documented first by Cohen et al. in 1940 and suggested that growth monitoring of children should be done in allergic disorders by anthropometry. [2] Atopic disorders like asthma and hay fever are well-known causes of growth retardation in childhood. [3],[4]

Growth impairment in children suffering from AD has been reported from the western countries [5],[6],[7] and from India. [8],[9] However, long-term effects of AD on the growth pattern of the affected children have not been adequately explored. A prospective longitudinal study from the west has reported retarded linear growth among children with AD. [10] Lack of data on the longitudinal growth of Indian children afflicted with AD prompted us to undertake this study to observe the growth pattern of children suffering from AD.

A total of 62 children (boys 27, girls 35), aged 3-5 years, suffering from AD, attending the pediatric dermatology clinic at the Postgraduate Institute of Medical Education and Research, Chandigarh, India, were included as study subjects. Sixty-eight normal healthy children (boys 39, girls 29), matched for age, sex and socioeconomic status were enrolled as controls from the Growth Clinic, Advanced Pediatric Centre of the same institution.

Diagnosis of AD was made by using UK Working Party′s diagnostic criteria. [11] The severity and extent of the disease were evaluated during each visit by using the SCORAD index. [12] Duration of disease state and remissions experienced by each patient and the duration of treatment received were recorded. Children with history or evidence of any chronic disease, bronchial asthma or allergic rhinitis and those on systemic corticosteroids were excluded from the study. The patients were managed with topical corticosteroids, antihistamines and general measures as and when necessary.

Patients and controls were followed up in a mixed longitudinal study at intervals of three months (±15 days) for a total period of 12 months. Age- and sex-wise distribution of patients and controls examined during follow-up is shown in [Table - 1]. Every child was measured for body weight (BW), height (H) and head circumference (HC) using standardized anthropometric techniques and instruments.

To establish whether there was any effect of disease parameters like mean disease duration, duration of treatment, SCORAD and extent of disease on weight and height attainments of children, patients were divided into three groups, viz ., height and weight < 10 th centile, 10 th -90 th centile and > 90 th centile of National Centre for Health Sciences (NCHS) standards.

Conventional statistics relevant to a small sample size were used to calculate central tendencies and the accompanying variability statistics for different measures of distance growth. Tanner′s method [13] has been applied to compute mean growth rates and standard deviations (SDs) for each of the measurements taken. The gender difference for each growth parameter was evaluated by applying Student′s unpaired t -test.

Mean and SDs of heights of patients and that of the control children did not show any statistically significant difference. At the entry point of the study, girls with AD had height identical to the controls. However, they were later found to be shorter throughout the study period with a statistically significant difference at the ages of 4+ ( P ≤ 0.05), 4.5+ ( P ≤ 0.05) and 4.75+ ( P ≤ 0.01) years [Table - 2]. At the end of the study period, the height of the girls was found to be comparable to that of controls. Height velocity of boys showed a decelerating pattern up to 4± age followed by a static trend as compared to controls, whereas girls experienced a fluctuating pattern at most of the age intervals [Figure - 1],[Figure - 2].

The changes recorded for body weights of both boys and girls with AD remained more or less similar to the controls except at some age levels [Table - 3]. A regular decline in weight was recorded in boys when compared with controls [Figure - 3]. On the contrary, girls belonging to both patient and control groups experienced a fluctuating pattern and the magnitude of growth rate was slightly lower in the patients than in the controls [Figure - 4]. Boys had lower HC values (statistically nonsignificant) than controls at the entry point of the study. Thereafter, as the children had grown, these values were higher (statistically non-significant) compared to the controls.

Girls had statistically significant ( P ≤ 0.05) lower mean HC values than controls initially and this trend was observed throughout the study period, though the difference became statistically nonsignificant from the age of 3.25+ onwards [Table - 4]. For all the three parameters considered, girls in general had lower mean changes than boys with a statistically significant difference at some age groups, more so regarding height [Table - 2],[Table - 3],[Table - 4]. The severity scores of the disease (SCORAD) ranged from 0-85 in case of boys and 0-80 in case of girls. Mean SCORAD values were in general found to be higher in girls than the boys of the same age except at 4 and 5 years, where boys had more severe disease [Table - 5].

The magnitude of sex difference remained statistically nonsignificant throughout the age range considered. The patients were also divided into three groups on the basis of extent of body surface area involvement [Table - 6]. Eighty nine percent of the study subjects had disease localized to ≤ 20% of the total body surface area and only 4.34% had > 50% of body surface area involvement. Parameters like mean disease duration, duration of treatment, SCORAD and disease extent did not show any effect on weight and height attainments of children when compared with NCHS standards. The fraction of patients found to be in remission during at least one visit in the study period was 21.7%.

India is thought to be a low-prevalence country for atopic disorders. [14] However, a significant portion of the pediatric population in this country experiences the morbidity associated with AD. The disease manifestation is much less severe in Indian children in comparison to the west. In a study by Kanwar et al . [15] the severity score (Rajka and Langeland) of majority of the 672 children with AD, examined over a period of five years, did not exceed 5. The authors also observed that most of these children were easily treatable and undergo gradual improvement or remission within 2-3 years of onset of the disease. [15] An analysis of the results presented in [Table - 2],[Table - 3],[Table - 4] reveals that the mean changes in growth attainments for BW, H and HC in boys were almost similar to controls throughout the age ranges considered.

In contrast, girls with AD showed poor growth attainment in terms of height and head circumference than the controls, thus confirming the adverse effect of AD on the growth attainments of girls. Children of both the sexes showed slower height increases than the controls. Though the final height in both the sexes was comparable to controls, girls showed significantly lower mean height values than the controls at some age intervals. These findings corroborate to those of Kristmundsottir et al. [5] and Massarano et al . [6] who have reported growth impairment in children with AD. However, the growth of the boys and the girls were not evaluated separately in these studies; hence, a conclusion regarding the sex differential could not be made. Patel et al. [10] have observed a slower height increases in prepubertal children with AD as they approached the teen age years, though final height gains in these children were normal. Our observation regarding the growth pattern of the affected children was similar.

Regarding HC values, boys with AD showed an identical result to that reported by Kristmundsottir et al . [3] who observed that the mean HC of patients were significantly greater than normal for both the sexes. The cause for this finding is unexplained. Boys in general showed better growth attainments than girls. Causes behind this gender difference can be many. The girls included in this study were more severely affected than the boys [Table - 5]. Moreover, the interplay of different physiological, environmental, socioeconomic and cultural factors, which modulate growth attainment in female children, may be contributory. The practice of preferential care and treatment given to male children in contrast to females in the existing Indian culture could contribute to this difference. Hence , we observed a negative effect of AD on the growth attainments of children. As per the pattern of disease in India, majority of the patients included in this study had mild disease and our observation of growth retardation was confined to the comparatively severely affected group, who were incidentally girls.

However, the final heights of the affected children were found to approach normal at the end of the study period. This may be due to repeated counseling of the parents about the disease during each visit, creating consciousness about the growth and diet of their children. The resultant improvement in the dietary intake of the children may have helped to make up the lag in growth near the end of the study period. Moreover, control of the disease, resulting in decreased itching, better sleep and a sense of well-being might have contributed to this effect. Thus, the mixed longitudinal study of children with atopic dermatitis presented in this article revealed that severe atopic dermatitis may reversibly impair a child′s linear growth.