Psoriasis involves immune dysregulation characterized by dominance of T-helper 1 (Th1) and downregulation of Th2 response.[1],[2] Some studies have reported that biological agents correct this cytokine imbalance, whereas conventional medications do not.[3] Various trials have compared etanercept with methotrexate in rheumatoid and psoriatic arthritis; however, we were unable to find any head-to-head trials in plaque psoriasis.

This was a preliminary prospective nonrandomized trial comparing etanercept with methotrexate in moderate-to-severe plaque psoriasis. Consecutive patients of moderate to severe psoriasis with PASI >7 except erythrodermic or pustular variants aged between 18 to 72 years seen in the Department of Dermatology, All India Institute of Medical Sciences, New Delhi, India, were included. Institutional ethics committee approved it (IEC/RP 46/2017), and the patients gave informed consent.

Patients in Group A received injection etanercept (Enbrel, Pfizer) [maintained in a proper cold chain], 50 mg twice weekly subcutaneously at the hospital day-care facility. The injection was provided free of cost to 20 patients until week 2, 18 patients until week 4, 13 patients until week 8, and 7 patients until week 12. The analysis is only of patients who received etanercept. In the methotrexate group of 28 patients included, 21 patients completed treatment till 8 weeks and 19 till 12 weeks. Mantoux positive (≥15 mm) patients (n = 4), received adequate prophylaxis with anti-tubercular drugs (ATD) (600 mg rifampicin and 300 mg isoniazid daily for 4 months) along with etanercept. In Group B, 28 patients received oral methotrexate 15 mg/week. Both groups received vaseline as the sole topical agent. All patients were followed up at 2, 4, 8 and 12 weeks. Treatment response was assessed using PASI, patient global assessment (PGA) and investigator global assessment (IGA). Estimation of serum cytokines (IL-4, IL-17, IFN-γ, TGF-ß and TNF-α) by sandwich ELISA (G Biosciences, USA) and tissue cytokines (IL-4 and IFN-γ) from lesional skin by real-time PCR was undertaken at baseline and week 12.

Table 1: Demographic and clinical profile of psoriasis patients in the 2 study groups

Table 2: Comparison of median psoriasis area and severity index between the 2 groups

Comparisons were made for PGA and IGA categorically for each follow up visit within the groups as well as between the groups. The comparative tables are given below [Table - 3]a and [Table - 3]b. 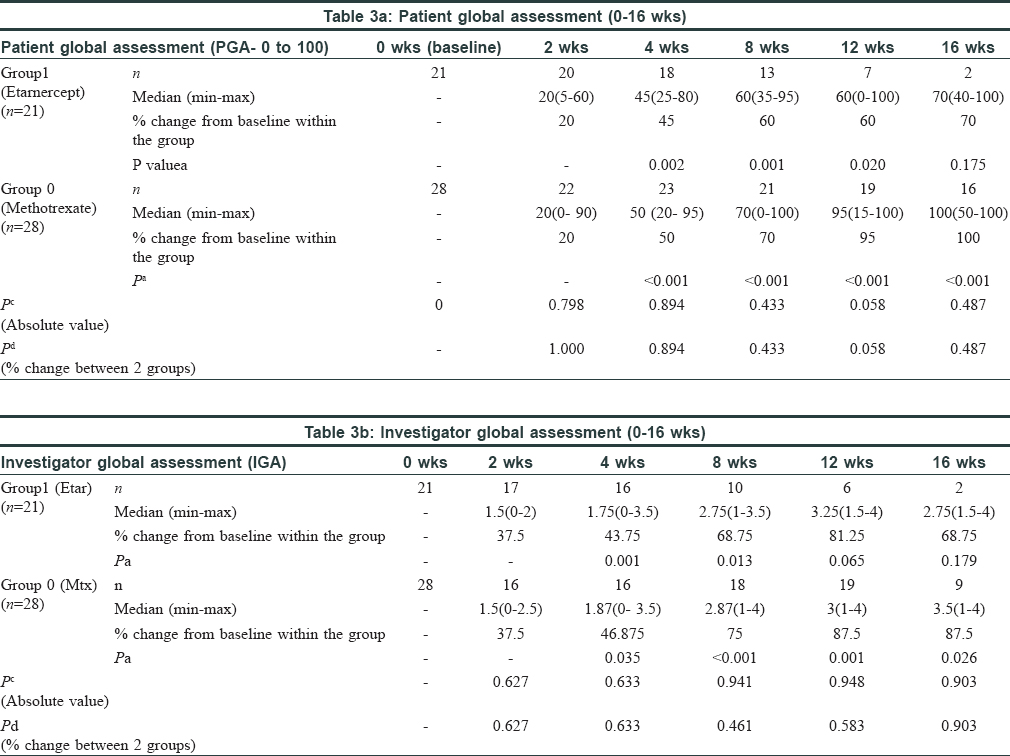 Median tissue IFN-γ level reduced by 90.2% in Group A (P = 0.027) and by 97.5% in Group B (P = 0.024) at week12. IL-4 level showed a significant rise from baseline in the methotrexate group (P = 0.027). Change in both the tissue cytokines between the two groups was comparable [Table - 4]a. A significant decline was observed in serum IL-17, IFN-γ and TNF-α in the methotrexate group and in IL-17 level in the etanercept group, but inter-group analysis showed it to be comparable between the two groups [Table - 4]b. 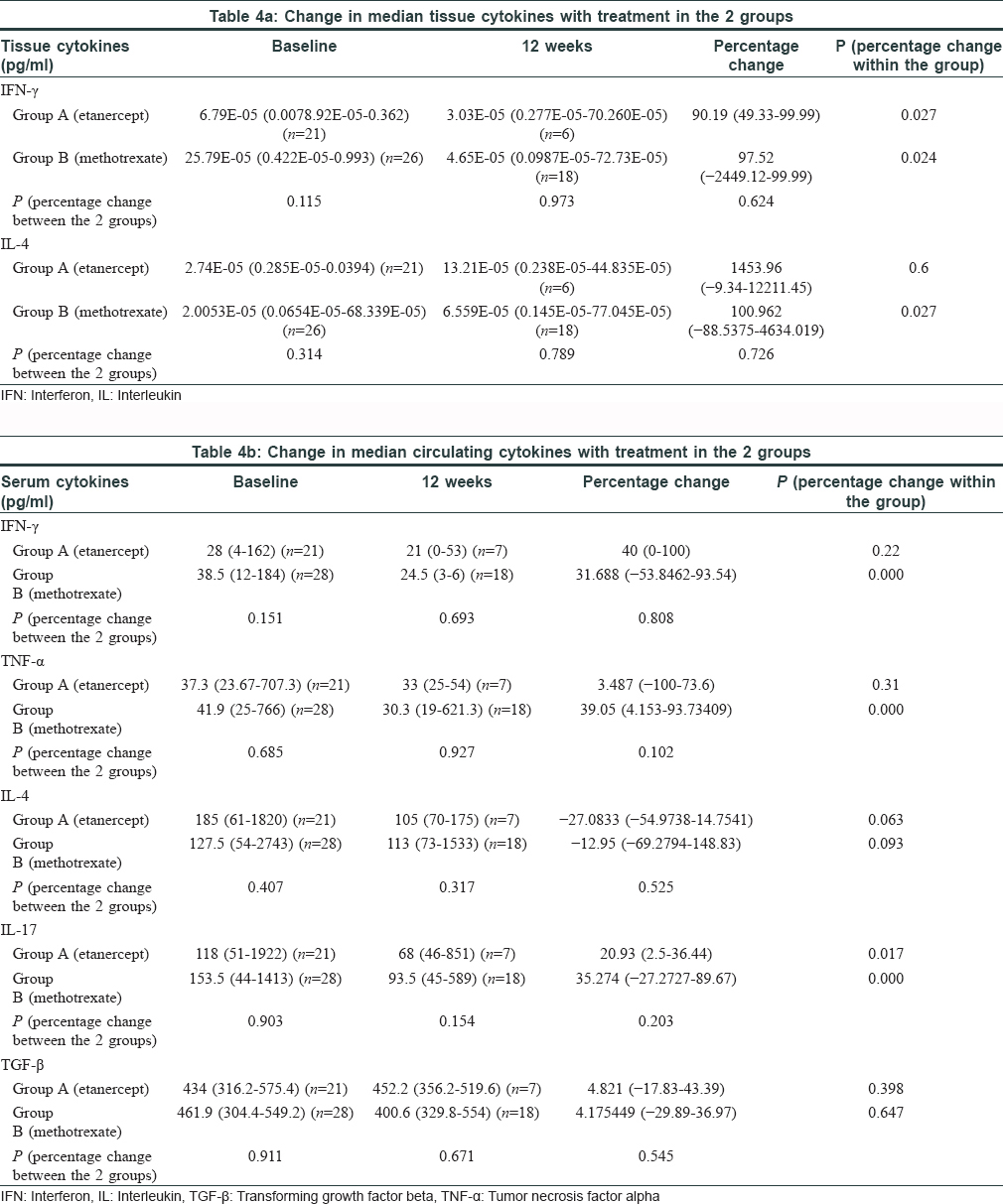 Adverse events like uneasiness, nausea and vomiting were only observed in Group B. No other significant adverse events were noted either group.

Both methotrexate and etanercept are effective in psoriasis. Methotrexate showed PASI 75 in 35%–40% patients after 16 to 24 weeks of treatment[4] while etanercept showed PASI 75 in 49%–57% patients at week 12 in the 50 mg twice weekly group.[5] A systematic review of trials revealed that biologicals have a slightly higher likelihood of achieving therapeutic response compared to nonbiologic systemic agents. Primary outcome measure was comparison of mean percentage reduction in PASI at week 8 between two groups. This has been mentioned in results. PASI 50, 75 and 90 in the 2 groups which were secondary outcome parameters, have been mentioned in the discussion as mentioning this in the result also increases the word count. Mentioning the % change as per IGA/PGA was making us extend beyond the word limit, hence, data has been provided in form of graphs.. As very few patients received etanercept after 8 weeks, we were unable to compare them at 12th week.

Only a few studies have analyzed the modifications of T cell responses in psoriasis post-treatment. They depicted the failure of conventional agents to influence Th1/Th2 balance.[3] Quaglino et al. reported significant reversal of Th1/Th17 activation by etanercept and concomitant upregulation of Th2/T-reg subsets, which correlated well with clinical response.[6] We observed a similar pattern of cytokine change with both etanercept and methotrexate. There was a significant rise in tissue IL-4 with methotrexate and decline in IFN-γ with both modalities. There was comparable decline in serum IFN-γ (P = 0.808), TNF-α (P = 0.102), IL-17 (P = 0.203) and IL-4 (P = 0.525) in both groups at week 12.

A small sample size may be the reason for no statistical difference in the 2 groups. Lack of randomization due to logistic reasons was another limitation. Moreover a 12 week period of follow-up may be inadequate to assess absence of new TB cases/reactivation of TB with the biological agent.

Taking percentage of patients achieving PASI 75 at the end of 12 weeks as 35.5% for methotrexate and 49% for etanercept (50mg biweekly) (as per previous studies), and a power of 80% and p value of 0.05, the sample size was calculated to be 294. Considering for allowance for losses of 20%, the required sample size came as 368.

However, because of limitation of costs of drug (etanercept- Rs.14,350/-per vial of 50 mg drug), and a fixed number of vials provided by the funding agency, we were able to recruit a fixed number of patients. Moreover it was a preliminary, non-randomized study.

Both etanercept and methotrexate showed good and comparable clinical outcomes, and an overall better and faster response was seen with methotrexate. A similar trend in skin and serum cytokine profile was observed. Hence, methotrexate remains an effective and comparatively inexpensive treatment for moderate-to-severe plaque psoriasis, whereas etanercept could be a better alternative for recalcitrant patients.

M/s Pfizer funded the study and provided 361 injections of Enbrel 50 mg each.

It was an investigator-initiated trial in which the funding agency (M/S Pfizer) had no interference in the design, conduct and analysis of the study.[7]