A protruding nodule on the upper lip

A 52-year-old woman presented with a 12-mm sized protruding nodule on the upper lip that had enlarged over the last 1 year and complained of occasional pain. Physical examination indicated a slightly erythematous nodule with disruption of the vermilion border of the upper lip [Figure - 1]. Examination of her medical history yielded nonspecific findings, including a negative human immunodeficiency virus serostatus. A skin biopsy was performed on her upper lip.

What is your diagnosis?

In a previous case series of thirty patients with epithelioid hemangioendothelioma of the skin and soft tissues, cutaneous epithelioid hemangioendothelioma usually presented as a solitary nodule and occasionally as a painful mass.[5] This tumor is primarily observed in middle-aged adults, and no specific sexual predominance is noted. However, the affected age groups may vary, and even children can develop the tumor.[6]

Histopathologically, epithelioid hemangioendothelioma is composed of cords, strands and solid aggregates of round, oval and polygonal cells with abundant pale eosinophilic cytoplasm, vesicular nuclei and inconspicuous nucleoli, embedded in a fibromyxoid or sclerotic stroma.[7] Nuclear pleomorphism is minimal. These cells line well-defined vascular channels in some areas, and form solid aggregates with prominent cytoplasmic vacuolization in other areas.[3]

In the present case, we found that the vascular tumor may have various components. An examination of the first biopsy specimen showed round or cuboidal cells, whereas that of the second biopsy specimen showed nests of spindle cells. Following repeated biopsy of the tumor, immunohistochemical staining helped confirm the diagnosis of epithelioid hemangioendothelioma. The tumor stained positively for vascular endothelial markers, such as CD31 or CD34. Tumors exhibited positive results when staining for vimentin, and exhibited negative results when staining for epithelial membrane antigen, S-100, cytokeratins and CD68.[8] Some authors reported positive results when staining for cytokeratins which was noted in one-fourth of the epithelioid hemangioendothelioma cases.[9]

Differential diagnosis of epithelioid hemangioendothelioma includes Kaposi's sarcoma, spindle cell hemangioma, epithelioid hemangioma and other vascular tumors such as pyogenic granuloma. The clinical and histological characteristics of each disease are listed in [Table - 1]. Based on the currently available data, it appears that the prognosis of primary cutaneous epithelioid hemangioendothelioma is good.[2] The risk of local recurrence or metastasis depends on the histologic features of the tumors, including nuclear atypia, increased mitotic activity, tumor cell spindling and necrosis.[10] Negative prognostic factors such as increased mitoses and nuclear atypia were associated with poor prognosis.[5] We contend that a precise review the histopathology of a case should be undertaken to diagnose and properly treat the tumor. 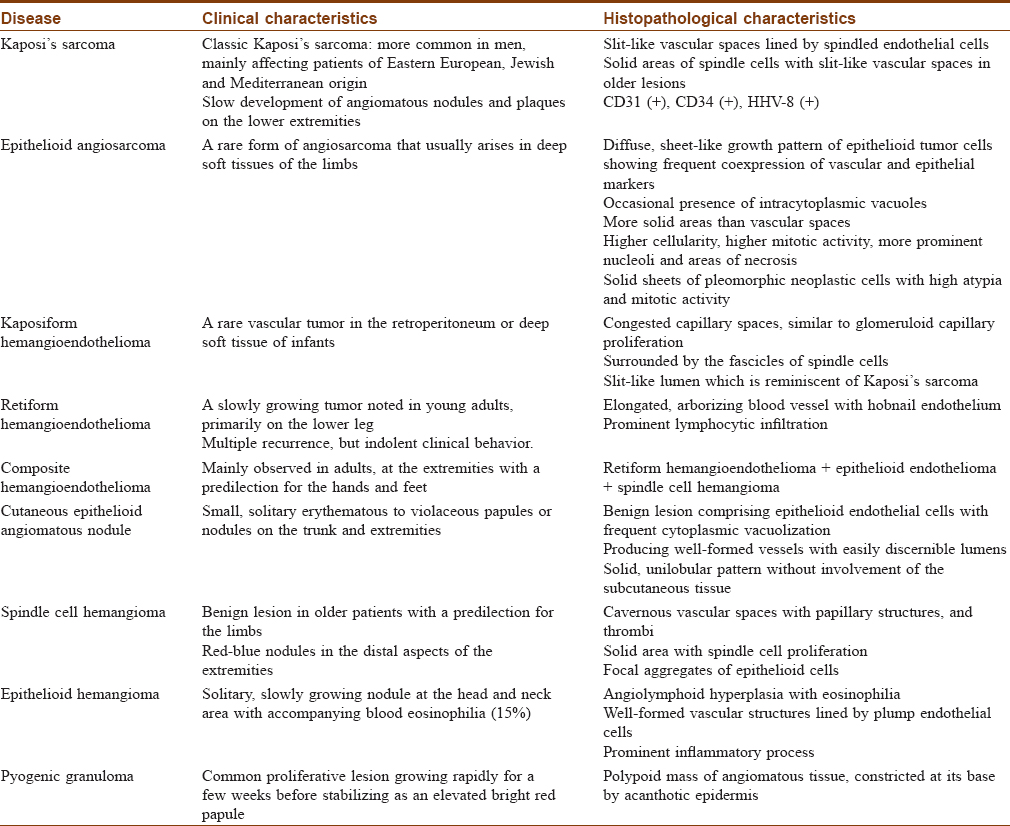 In conclusion, our present case highlights the risk of misdiagnosis of epithelioid hemangioendothelioma as hemangioma or Kaposi's sarcoma, due to the various tumor components on histology examination. When a vascular tumor is suspected, a complete excision, appropriate staining and careful review is essential, particularly for large tumors.