A randomized, double-blind trial of amorolfine 0.25% cream and sertaconazole 2% cream in limited dermatophytosis

Background: Dermatophytosis is becoming increasingly unresponsive to conventional antifungals. Newer topical antifungals may be more effective in these patients.
Aims: To evaluate and compare the efficacy and safety of amorolfine 0.25% cream and sertaconazole 2% cream in limited tinea cruris/corporis.
Methods: A single-center, randomized (1:1), double-blind, parallel group, active-controlled trial (CTRI/2014/12/005246) was performed. Sixty-six untreated adults with acutely symptomatic tinea cruris/corporis were included in the study. All patients had limited cutaneous involvement and were KOH mount positive. Group A received amorolfine 0.25% cream, and group B received sertaconazole 2% cream twice daily application to the lesions for 4 weeks. After the baseline visit, four follow-up visits were carried out. The outcome measures for effectiveness were clinical and mycological cure. Safety parameters studied were treatment-emergent adverse events and changes in routine laboratory parameters.
Results: Both sertaconazole and amorolfine significantly reduced symptoms (P < 0.001) in both groups. However, improvement in symptoms (pruritus, burning sensation, erythema, scaling and crusting) was significantly greater in the sertaconazole group at every follow-up visit. Sertaconazole cream was also more effective than amorolfine cream in reducing the number of lesions (P = 0.002 at 12 weeks) and improving the Dermatology Life Quality Index (P < 0.001) at all the follow-up visits. Adverse events were similar in the two groups (P = 0.117). Fungal cultures became negative in 92.3% of the sertaconazole group as compared to 80% in the amorolfine group (P = 0.010).
Limitations: Antifungal susceptibility testing could not be done.
Conclusion: Sertaconazole 2% is superior to amorolfine 0.25%, both in terms of effectiveness and tolerability. Improvement can be appreciated from second week onwards.

Dermatophytoses are among the commonest of infections occurring worldwide. They are particularly widespread in tropical countries owing to the warm and humid climate, crowded living conditions and other socioeconomic factors.[1] Although not life-threatening, they produce significant symptoms and frequently diminish the quality of life. Dermatophytosis unresponsive to conventional antifungal drugs is becoming more common, resulting in frequent treatment failure.[2]

Despite the advent of newer antifungal agents, treatment remains challenging. Many clinical trials have been conducted to assess these drugs for efficacy and safety.[3] In the past terbinafine 1% cream has been compared with butenafine 1% cream[4] and sertaconazole nitrate 2% cream,[5] and one study evaluated the efficacy of oral fluconazole with Whitfield's ointment to topical 1% butenafine.[6]

Amorolfine and sertaconazole have recently been marketed in India for the treatment of dermatophytosis. Sertaconazole is an imidazole antifungal that inhibits lanosterol 14-alfa demethylase, leading to disruption in ergosterol biosynthesis.[7] Ergosterol is a major component of the fungal cell membrane and its deficiency is responsible for fungistatic and fungicidal properties of sertaconazole. Amorolfine interferes with the synthesis of ergosterol at the delta 14 reduction and the delta 7-8 isomerization steps, leading to both the accumulation of the delta 14 sterol ignosterol in the cell membrane and the depletion of ergosterol.[8]

This study was undertaken with the objectives of evaluating and comparing the efficacy, safety and tolerability of amorolfine 0.25% cream and sertaconazole 2% cream. Improvement in the quality of life in the two treatment arms was also assessed.

The study was carried out over a period of 8 months at the Medical College, Kolkata, as a single-center, randomized (1:1), double-blind, parallel group, active controlled trial. Permission from the Institutional Ethics Committee was obtained and the study was registered (No CTRI/2014/12/005246). Written informed consent was obtained from all study participants. Untreated males and females (>18 years) with acutely symptomatic tinea cruris/corporis with limited involvement (i.e. restricted to a single-body region) attending the Dermatology Outpatient Department of the hospital. All patients had positive KOH mounts. Patients were excluded from the study if they had received 1 week of topical therapy or 4 weeks of systemic therapy for tinea corporis/cruris, had a history of hypersensitivity to the study medications, were immunosuppressed due to drug or disease or were suffering from advanced disease of vital organs. Patients who refused consent and women who were pregnant or lactating were also excluded.

After the initial visit, follow-up visits were carried out at 1, 2 and 4 weeks. The treatment was then discontinued and patients were examined again at 12 weeks both clinically and with 10% KOH mounts for detection of relapses.

Eligible patients were randomized into either group A or B with an allocation ratio of 1:1 utilizing a computer-generated randomization sequence. Allocation concealment was achieved by the use of a sequentially numbered opaque-sealed envelope (SNOSE) technique. Patients in group A received amorolfine 0.25% cream [Loceryl cream, Manufacturer Galderma, Lot no. TD0764, Date of manufacture February 2014, Date of expiry January 2016] while patients in group B received sertaconazole 2% cream [Onabet 2%, Manufacturer Glenmark Pharmaceuticals, Lot no. 11170792, Date of manufacture May 2014, Date of expiry April 2016]. Both groups were instructed to apply the cream twice daily to the lesions for 4 weeks. Both the groups were also given cetirizine (10 mg tablets) [Brand name: CIT-Z, Manufacturer: Square Pharmaceuticals, Central Medical Store Supply, supplied free of cost to the patients from the institutional pharmacy] to be taken once daily at bedtime for 4 weeks.

The medicine tubes were painted in opaque white color, kept in an opaque envelope and coded “medication A” and “medication B” by the drug dispenser. The codes were kept securely and were to be broken only when a serious adverse event was faced. The evaluator who assessed the effectiveness and safety parameters at baseline and at follow-ups was another dermatologist who was seated in a separate room and not involved in randomization, drawing blood, scraping and KOH mount, thus making the trial double-blind.

The primary outcome measures for effectiveness were clinical cure, mycological cure and global cure. Clinical cure quantifies the disease activity depending on number of lesions, pruritus, burning, erythema, scaling, grade of improvement (Grade 0: No improvement, Grade 1: Few lesions/erythema + mild-to-moderate itching, Grade 2: Scaly lesions ± itching, Grade 3: No lesions ± residual pigmentation). Mycological cure was determined by the results obtained by KOH mount and fungal culture in Sabouraud dextrose chloramphenicol agar medium followed by microscopic examination. Global cure was calculated by combining the results of clinical and mycological cure. The secondary effectiveness parameters were Patients' Global assessment of disease activity and Physicians' Global assessment of disease activity improvement; both were recorded on a five-point Likert scale (0: No improvement, 1: Mild improvement, 2: Moderate improvement, 3: Marked improvement and 4: Excellent improvement).[9] These parameters were assessed at baseline and at the end of weeks 1, 2, 3 and 4 following randomization. Safety parameters assessed included both spontaneously reported adverse events and adverse events elicited by physician at each follow-up visit. Routine hemogram, liver function tests, serum urea, creatinine, fasting blood glucose were recorded at baseline and at the end of treatment. The quality of life improvement was assessed by the validated vernacular version (Bengali) of Dermatology Life Quality Index at baseline and study end.[10]

The target sample size was 60 patients, with 30 evaluable subjects in each treatment group. This was calculated considering mycological cure of 78.9% with amorolfine cream[3] and 100% with sertaconazole cream,[5] with 80% power and 0.05 probability of Type 1 error. Considering possible 10% dropout rate, this translated to a recruitment target of approximately 33 subjects per group or 66 subjects overall.

Continuous variables were compared within groups by the paired t-test and between groups by the independent t-test. For comparison of unpaired and paired nonparametric data, the Mann–Whitney U test and the Wilcoxon's matched pairs signed rank test were employed respectively. Freidman's analysis of variance was carried out with nonparametric data for within group repeated measures comparisons, followed by the post hoc Dunn's test. Categorical data were compared between groups by the Chi-square test or the Fisher's exact test, as applicable. MedCalc version 11.6 (Mariakerke, Belgium: MedCalc Software, 2011) and Graph-pad Prism version 5 (San Diego, California: GraphPad Software Inc., 20057) software were used for statistical analysis.

Most of the study participants were educated, middle-aged males with an income above the poverty line. The area of residence of the groups (rural and urban) was not significantly different. Tinea corporis was diagnosed in 58% patients, tinea cruris in 26% and the rest had both tinea cruris and corporis [Table - 1]. 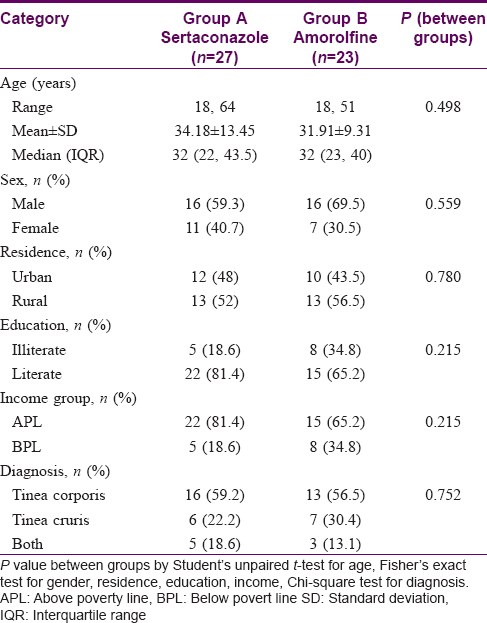 The number of tinea lesions in the two study arms were similar (P = 0.436) at baseline. A significant decline in the number of lesions was noted in both the groups from the first follow-up onwards (P < 0.001) which continued till the end of treatment. However, the reduction in number of lesions significantly greater in the sertaconazole group as compared to the amorolfine group at all follow-ups [Table - 2]. Complete cure of lesions was seen in 17 (62.96%) patients treated with sertaconazole at the end of active treatment and 6 (26.09%) patients in the amorolfine group. 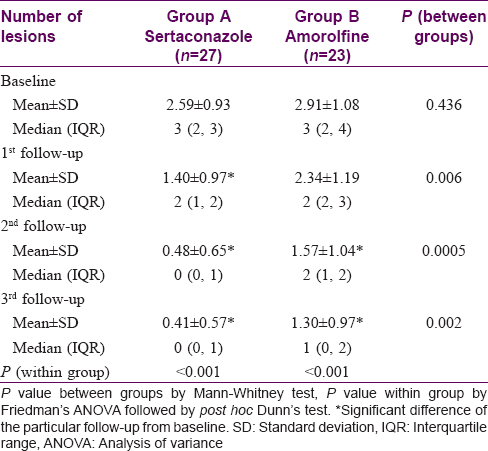 Table 2: Comparison of the number of lesions between groups

All symptoms (pruritus, burning sensation) and signs (erythema, scaling and crusting) decreased progressively at each follow up in both the groups from the first follow-up onwards (P < 0.001). The improvement in both signs and symptoms was more marked in the sertaconazole group at each follow-up [Table - 3]a and [Table - 3]b. 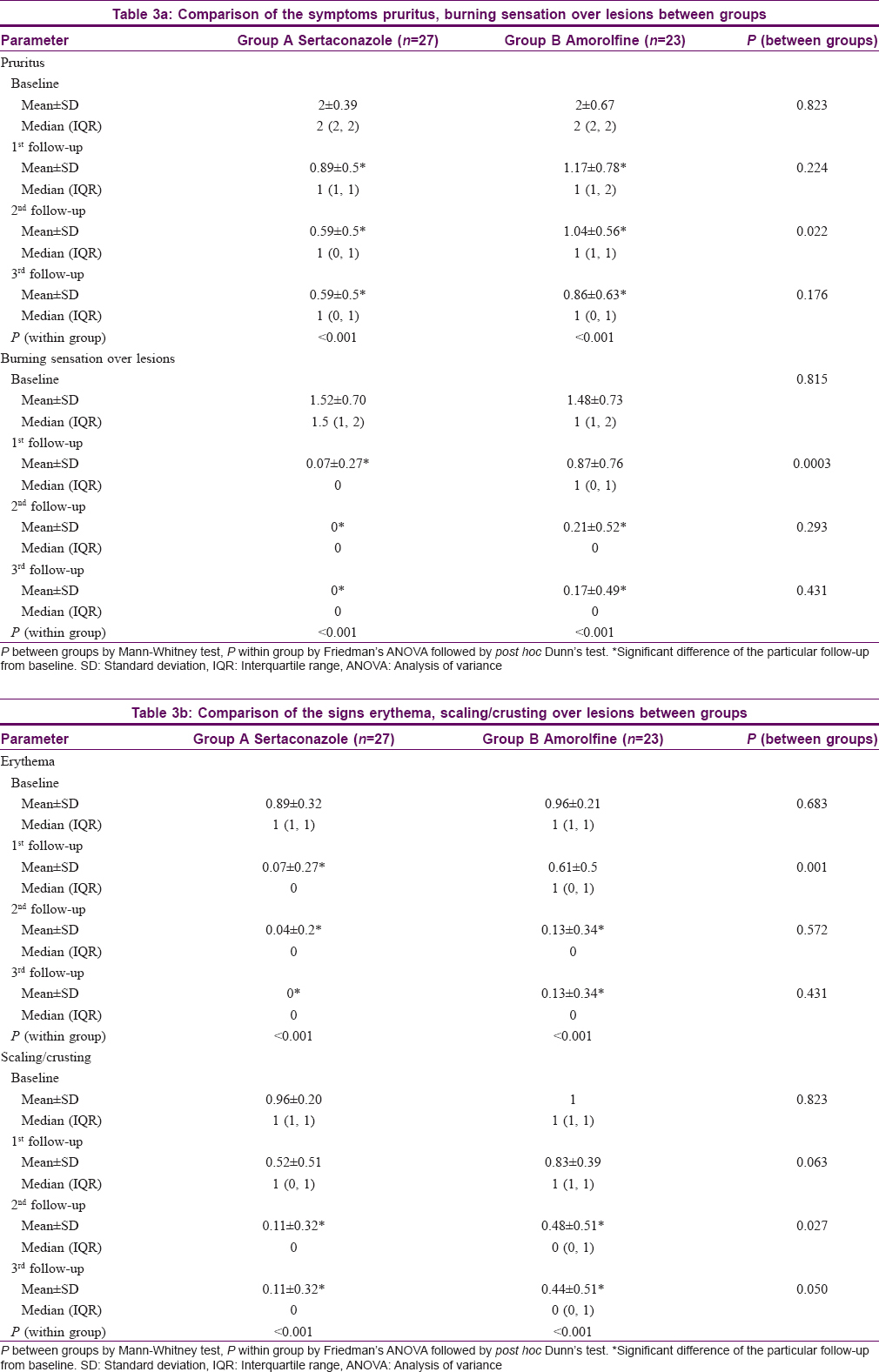 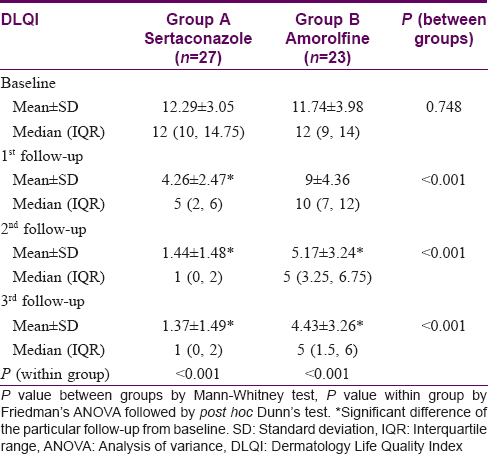 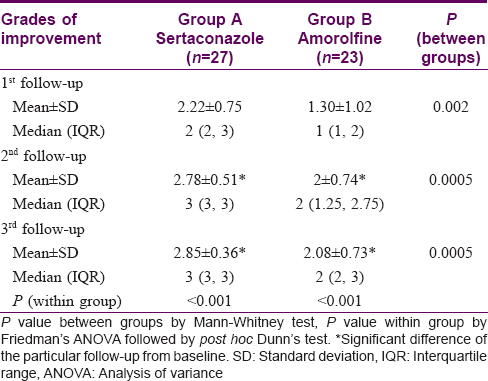 Table 5: Comparison of the grades of improvement of lesions between groups

In the amorolfine group burning was seen in 3 patients, oozing/vesiculation in 2 patients and pigmentation in 3 patients while in the sertaconazole group 4 patients developed postinflammatory hyperpigmentation. There was no difference in the incidence of adverse events in the two groups (P = 0.117). 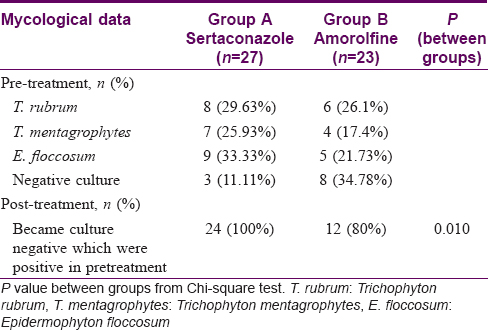 Table 6: Comparison of the mycological data between groups

Clinical and mycological relapse was seen in 3 patients (11.11%) in the sertaconazole group and in 1 patient (4.34%) in the amorolfine group at the end of the study, but this was not statistically significant (P = 0.722).

A limitation of this study was that antifungal susceptibility testing could not be done due to logistic reasons.

Increasing resistance of tinea to the older antifungals has led to distressing relapses in patients in recent times. A hit-and-trial method is often adopted by dermatologists since the results of studies of antifungal effectiveness conducted many years ago cannot be extrapolated to the current scenario. We evaluated the efficacy of two newer options, sertaconazole 2% and amorolfine 0.25% in a comparative trial.

At the end of the study, 3 patients relapsed (one in the amorolfine group and 2 in the sertaconazole group) and in all 3 patients Epidermophyton floccosum was isolated. This has clinical implications, and in patients with E. floccosum infection alternative strategies (such as the addition of an oral antifungal) should be employed to prevent relapses.

There is an urgent need for further clinical trials with a longer follow-up period and using different antifungal drugs in combination to determine more effective and safer regimens.

Both sertaconazole and amorolfine provide relief with acceptable adverse effects in limited tinea. However, sertaconazole 2% cream was significantly better than amorolfine 0.25% cream with regard to earlier relief of symptoms and improved quality of life. Relapses and unresponsiveness are seen with both the topical agents.

The authors are thankful to Galderma and Glenmark Pharmaceuticals for donating the trial medications free of cost to the researchers. The authors are also grateful to the faculty, residents and staff of the Department of Dermatology Medical College, Kolkata for their cooperation during the entire duration of the study.