A retrospective study: Clinicopathological and immunohistochemical analysis of 54 cases of tufted angioma

Background: Tufted angioma is a rare benign lesion with vascular proliferation.
Aim: To retrospectively analyze the clinicopathological manifestations and immunohistochemical features of tufted angioma.
Methods: Clinical and histopathological features of tufted angioma (n = 54) were evaluated and analyzed retrospectively in the Department of Dermatology, Xijing Hospital from 2003 to 2014.
Results: Clinically, tufted angioma usually presented as erythematous plaques and papules on the head and neck (n = 11), trunk (n = 21) and extremities (n = 22), mainly in children (n = 48), without gender difference (24 males and 30 females). A total of 45 cases showed solitary lesions and nine cases showed multiple lesions. Common symptoms included pain (n = 11), tenderness (n = 7), itching (n = 1), hypertrichosis (n = 7), hyperhidrosis (n = 6) and Kasabach–Merritt phenomenon (n = 1). Histopathologically, typical tufted angioma (n = 37) showed proliferation of endothelial cells in a so-called cannonball pattern, while in the early (n = 4) and regressed (n = 13) stages the tufted appearance was not prominent. The proliferated endothelial cells were diffusely positive for CD31 and Wilms tumor 1, focally positive for D2-40 and Prox1, and negative for Glut-1.
Limitations: Our research was confined to patients of Chinese origin and our sample size was limited.
Conclusions: Tufted angioma is a rare vascular neoplasm with diverse clinical manifestations and unique pathological features. It should be recognized as a vascular tumor with lymphatic differentiation. We emphasize the importance of considering tufted angioma in the differential diagnoses of any congenital or acquired vascular tumor.

Tufted angioma was first described by Sim-Davis et al. in 1976.[1] The same condition was named as angioblastoma by Nakagawa in 1949 in Japanese literature[2] and as progressive capillary hemangioma by Macmillan and Champion.[3] Tufted angioma, characterized by tufts of endothelial cells in a cannonball pattern in the dermis, is a rare benign lesion with vascular proliferation. It usually presents as dusky red to purple plaques or papules on the trunk and extremities of children and adolescents.[4],[5] Previous case series of tufted angioma have had the limitation of being case reports or small sample studies. Tufted angioma is sometimes misdiagnosed, thus histopathologic examination and immunohistochemistry are required for confirmation. In addition, tufted angioma with Kasabach–Merritt phenomenon, though rare, causes complications and hence needs to be recognized. Therefore, we think it is necessary to provide an in-depth study with larger sample size on tufted angioma. In this study, we collected the largest scale of tufted angioma sample from mainland China. Furthermore, we did comprehensive clinical and histopathological analysis on tufted angioma and emphasized the importance of considering tufted angioma in the differential diagnoses of any congenital or acquired vascular tumor.

After Institutional Review Board approval, the data of patients (n = 54) diagnosed with tufted angioma (between 2003 and 2014) were obtained from the Department of Dermatology, Xijing Hospital, Fourth Military Medical University, Xi'an, China. Those patients with incomplete clinical or pathological data were excluded. Clinical photographs, histopathology slides and paraffin blocks of all the patients were available for clinicopathological analysis and immunohistochemical study. All the patients were diagnosed with tufted angioma by clinical and histopathological features. Immunohistochemical analysis was performed in all cases. Sections were stained for CD31 (Clone JC70A, 1:100, Dako, Glostrup, Denmark), D2-40 (Clone D2-40, 1:100, Dako), Prox1 (polyclone, 1:200, AngioBio, Del Mar, USA) and WT-1 (Clone 6F-H2, 1:200, Dako). The antibodies and detection system were from Dako. Antigen retrieval was performed by heating slides with Tris–ethylenediaminotetraacetic acid buffer (pH 9) in a pressure cooker (140 KPa for 2 min).

Lesional samples from a total of 54 patients with tufted angioma, including 24 (55.6%) male patients and 30 (44.4%) female patients, were collected for analysis in this study. The age of the patients ranged from 1-month-old to 40-year-old, and the patients' medium age was 1-year-old. Tufted angioma usually occurs in childhood as an erythematous plaque on the trunk and extremities [Figure - 1]a, but there were also cases of adults acquiring tufted angioma [Figure - 1]b. Lesions were usually located at head/neck, trunks and extremities, presented as papules <1 cm to plaques larger than 20 cm in diameter. A total of 45 (83.3%) cases showed solitary lesion and nine (16.7%) cases showed multiple lesions [Figure - 1]c. Three (5.6%) cases showed reddish multiple plaques in a linear distribution [Figure - 1]d. The lesions of 21 (38.9%) patients were asymptomatic. Common symptoms included pain, tenderness, itching, hypertrichosis and hyperhidrosis [Figure - 1]e. Lesions of 39 (72.2%) patients were congenital and developed gradually over time. In addition, the age of first onset for the remaining 15 (27.8%) patients ranged from 1 month to 20 years. Lesions of two (3.7%) patients were in the quiescent state and 13 (24.1%) partially subsided after treatment during a 2-year follow-up [Figure - 1]f. Surgical excision seems to be effective treatment for relatively small lesions. Two (3.7%) patients achieved complete clinical remission through surgical treatment. However, except for surgery, all other forms of treatments including interferon, topical or systemic corticosteroids and radioisotope therapy were ineffective or showed only partial success. One (1.9%) case showed tufted angioma accompanied by Kasabach–Merritt phenomenon [Figure - 1]g. Clinical features of 54 cases of tufted angioma is provided in [Table - 1]. 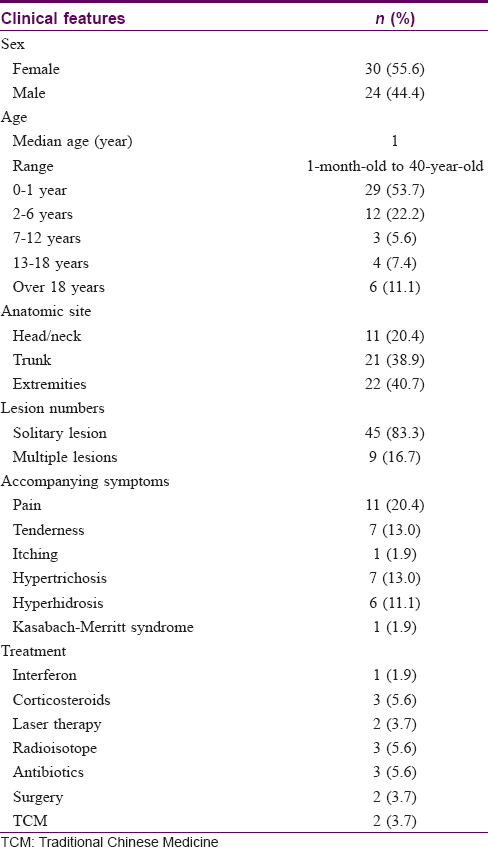 In our series of 54 cases, two biopsies in different sites were performed in four cases. Thirty-seven (68.5%) cases manifested as many lobules of tufts with a “cannonball” appearance in the dermis, superficial subcutis and even deep in subcutaneous tissue (2 of 58 biopsies), consistent with the direction of the intradermal vascular network [Figure - 2]a. These lobules of closely packed poorly canalized capillaries were lined with endothelial cells and surrounded by pericytes. Dilated crescent-shaped/semilunar lymphatic channels were at periphery. A large number of the fissure vein cavities and erythrocytes, sometimes with distended veins, were seen in the center [Figure - 2]b and c]. Cellular atypia and atypical mitotic figures were not observed [Figure - 2]d. Four cases (7.4%) showed poorly canalized vascular lobules without typical configuration in the dermis, indicating they were at the early stage of development. [Figure - 3]a. Thirteen (24.1%) cases showed reduced endothelial cells and vascular components compared with that of typical ones, surrounded by fibrosis. These were at the regression stage. [Figure - 3]b. Twenty-nine (53.7%) of 58 biopsies showed various degrees of irregular epidermal hyperplasia, 31 (57.4%) biopsies showed increased pigmentation in basal layer [Figure - 4]a and 4 biopsies (7.4%) showed increased eosinophils in the dermis [Figure - 4]b. The biopsy of the patient with Kasabach–Merritt phenomenon showed proliferation of endothelial cells in a lobulated pattern accompanied by microthrombus, large numbers of extravasated red blood cells adjacent to larger blood vessels and massive lymphocytic infiltration around tufts in the dermis [Figure - 5]a and [Figure - 5]b. Histopathological features of 54 cases of tufted angioma is provided in [Table - 2]. 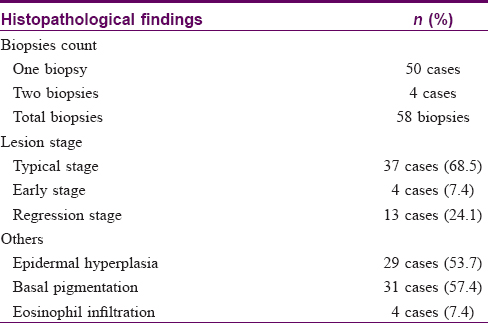 Tufted angioma is a rare benign vascular proliferation that mostly appears during infancy or early childhood. Its characteristic finding is tufts of capillaries located in the dermis in a “cannonball” pattern.[2] In our study, we collected the largest sample of tufted angioma from mainland China and presented comprehensive clinical and histopathological analysis.

Osio described a series of 13 childhood tufted angiomas and found a clear male predominance (9 of 13 children).[4] In our series, tufted angioma predominantly develops in infancy or early childhood without gender difference. It could present with different clinical features.[4],[5] In our cases, it usually presents as dusky red to violaceous macules, papules to plaques, varying in size and occasionally accompanied by hypertrichosis and hyperhidrosis. In line with our observations, the most common sites are neck, trunk and extremities.[6] Most lesions slowly extend with time, being progressive but benign in nature. Occasional spontaneous regression is reported. Osio reported five of 13 children with tufted angioma showing spontaneous regression during a follow-up of 2–19 years. In our observation, however, none of the lesions subsided spontaneously during a 2-year follow-up.[4] Besides the common type of tufted angioma, the other type is Kasabach–Merritt phenomenon, which refers to tufted angioma complicated with thrombocytopenia and coagulation dysfunction.[2],[7]

The differential diagnoses of tufted angiomas are hemangioma-like lesions and vascular malformations, including infantile hemangioma, vascular malformations, angiosarcoma, Kaposiform hemangioendothelioma and Kaposi sarcoma in adults.[5],[8] Histopathologic examination and immunohistochemistry are necessary to exclude other skin lesions. Because of the manifestation of red, swelling, warm and occasional painful mass, tufted angioma sometimes could be misdiagnosed as local infection and inflammation. Besides, due to the rarity of tufted angioma complicated with Kasabach–Merritt phenomenon, misdiagnosis often occurs. Ultrasound scan and blood tests are essential to reduce misdiagnosis.[9] Kasabach–Merritt phenomenon could manifest as a spectrum of features, ranging from slightly mild thrombocytopenia to life-threatening consumptive coagulopathy, even hemorrhage or disseminated intravascular coagulation. Lei reported a patient diagnosed with tufted angioma and Kasabach–Merritt phenomenon who died due to postoperation multiple organ failure caused by his platelet count fluctuation.[9] Laboratory tests such as a complete blood count and coagulation test should be done when Kasabach–Merritt phenomenon is suspected.[4],[9]

Histologically, tufted angioma shows dense agglomerates of endothelial cell lobules and capillaries, similar to cannon balls, occasionally with hemosiderin and rarely inflammatory cells or edema.[5],[7] Typical tufted angioma is characterized by separated nodules composed of closely packed endothelial cells in the dermis, with proliferation of spindled and polygonal cells surrounding vascular channels, manifesting as tufts. The proliferating cells show no cellular pleomorphism or atypical mitotic figures.[5] During the early and the regressing stage of tufted angioma, the pathological manifestations of tufts are not typical. The tufts of endothelial cell lobules and capillaries are reduced and fibrous tissue is irregularly proliferated. Increased basal layer pigmentation leads to different colors of skin lesions, from dusky red to purple. In our series, four biopsies exhibited eosinophil infiltration in the dermis on the sections, but only one patient complained of itching clinically.

Our samples were focally positive for D2-40. D2-40 is supposed to be a marker for the diagnosis of tufted hemangioma and Kaposiform hemangioendothelioma. D2-40 label in tufted hemangiomas is shown in the widened superficial vessels and is negative or patchy in the capillaries of the cannonball vessels.[11] D2-40 is also reported to be positive in the small capillaries in tufted angioma.[6] In most of the cases, D2-40 is focally positive in tufted angioma, Kaposiform hemangioendothelioma, and spindle cell hemangioma, similar to our observations.[20],[21]

Currently, there are no treatment guidelines, and the therapy for tufted angioma is limited. Treatments with local or systemic corticosteroids, laser, surgical resection, interferon alpha, chemotherapy and radiotherapy have been successful in individual case reports.[7],[9] In our series, treatment with surgical excision showed complete clinical remission for relatively small lesions. Other forms of treatment showed only partial or no response. It is essential to obtain a complete blood cell count and coagulation function test when suspecting a child with tufted angioma complicated with Kasabach–Merritt phenomenon.[4] Owing to the high mortality rate of this condition, it should be intervened as early as possible. Kasabach–Merritt phenomenon needs aggressive treatment, such as corticosteroids, vincristine or interferon-α.[6]

There are some limitations in our study. Our study is only from Chinese people and all the clinical data is obtained from mainland China. The clinical and pathological features of tufted angioma from other populations or other countries are not included. Besides, our sample size is limited. An in-depth study with larger sample size will contribute to the further research on tufted angioma.

In this study, we described the clinical manifestations and histopathological characteristics of tufted angioma. Tufted angioma predominantly occurs in infancy or early childhood without gender difference. It usually presents with dusky red to violaceous macules, papules to plaques of varying size on neck, trunk and extremities. Symptoms include pain, tenderness, itching, hypertrichosis, hyperhidrosis and Kasabach–Merritt phenomenon. We also performed immunohistochemical studies, with the conclusion that tufted angioma should be recognized as a vascular tumor with lymphatic differentiation. It is important to consider tufted angioma in the differential diagnoses of any congenital or acquired vascular tumor.

The authors certify that they have obtained all appropriate patient consent forms. In the form, the patients have given their consent for their images and other clinical information to be reported in the journal. Patients understand that name and initials will not be published and due efforts will be made to conceal their identity, but anonymity cannot be guaranteed.

Natural Science Foundation of China (grant no. 81672691) was used to help support writing the report.