A retrospective study of the utility of targeted phototherapy in vitiligo

Background: Targeted phototherapy is a recent advance in the treatment of vitiligo, involving selective treatment of vitiligo patches with no effect on surrounding areas. Although it has been in use for a few years, little data is available regarding its safety and efficacy.
Aims: A retrospective study to determine efficacy and safety of targeted phototherapy in vitiligo.
Methods: One hundred and thirty four patients (male: 53, female: 81) who received targeted phototherapy and completed 11 or more sittings were included. Treatment was given once a week using the Lumera phototherapy system, a broadband ultraviolet B source, starting at 150 mJ/spot and after excluding a sunburn reaction, with increments of 50 mJ every week up to a maximum of 1000 mJ/patch. Chi-square test for linear trends was used for statistical analysis.
Results: The most common sites involved were the legs and a majority (70.9%) had non-segmental vitiligo. Response was mild in 78 (58.2%) patients, moderate in 50 (37.3%) and excellent in 6 (4.5%) patients. Response was directly proportional to the number of sittings with more patients showing moderate and excellent responses with an increase in the number of sittings. The most common site for an excellent response was the trunk while the lower limbs were involved in most cases with a moderate or mild response. Side effects were seen in 27 (20.2%) patients, the commonest being erythema.
Limitations: This is a retrospective uncontrolled study. Further, the effects of adjuvant treatment were not assessed.
Conclusions: Targeted phototherapy is a useful treatment for vitiligo with mild adverse effects, though response is mild or moderate and appears to be directly proportional to the number of treatments received.
Keywords: Targeted phototherapy, vitiligo, Vitiligo Global Issues and Consensus Conference classification

Targeted phototherapy has emerged as a promising alternative to conventional phototherapy for vitiligo. This is especially true in patients having limited body surface area involvement. It involves delivering ultraviolet radiation to a precise area, leaving the surrounding normal area untreated, thus minimizing side effects. Even though it has been in use for a few years now, there is a paucity of studies on the efficacy and safety of this modality in vitiligo.

This study was carried out at Disha Skin and Laser Institute, a dermatologists' group practice in Thane, Maharashtra, to evaluate the efficacy and safety of targeted phototherapy in patients of vitiligo. The study included patients who had received targeted phototherapy over a period of 15 months (between October 2011 and December 2012). A total of 134 patients were included.

Patients clinically diagnosed as having vitiligo with up to 5% body surface area involvement and those who had completed at least 11 sessions of phototherapy were included. Patients with vitiligo affecting more than 5% of the body surface, those with a history of photosensitivity disorders and pregnant women were excluded. Data from otherwise eligible patients who did not complete at least 11 sessions was excluded from analysis. All patients were counseled regarding the treatment protocol, side effects and the need for adherence to treatment, and they signed a consent form before initiating therapy.

Patients were sub-divided with respect to the type of vitiligo into segmental, non-segmental and unclassified types as per the “Revised classification/nomenclature of vitiligo and related issues: The Vitiligo Global Issues Consensus Conference” classification.[1] The site of the vitiligo lesion (scalp, face excluding periorbital and perioral areas, periorbital, perioral, trunk, upper limbs, lower limbs, genitalia and perianal areas) was recorded.

Treatment was given once every week using the Lumera Phototherapy System, manufactured by Lerner Medical Devices, Inc., and distributed by Daavlin Company, USA. It emits ultraviolet B light of wavelength 290–320 nm. The beam of ultraviolet light was adjusted to the shape of the treatment area using filters of different shapes. Both the treating dermatologist and the patient wore protective eyewear during the treatment. Since most patients were of skin type IV and above, the therapy was started at 150 mJ/spot as per the parameters provided by the manufacturer. Dose increments were done as in [Table - 1]. 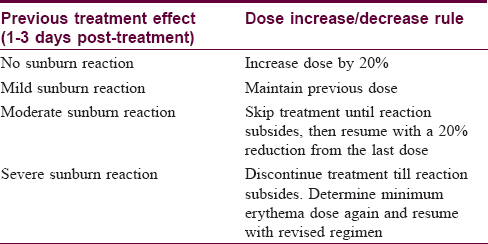 The response in terms of repigmentation achieved was graded using a physician global assessment scale as mild (<50%), moderate (50–75%) and excellent (>75%).

Table 2: Treatment response as per sittings

Table 3: Distribution of patients according to outcome and number of sessions 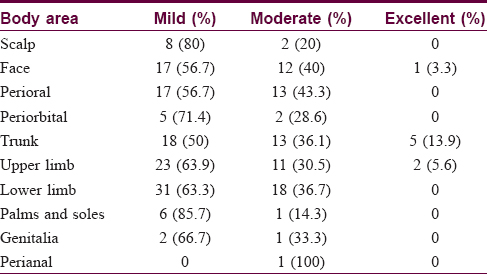 Table 4: Grades of response with respect to site of vitiligo lesions

Table 5: Side effects of targeted phototherapy

Vitiligo is a chronic, benign disorder of pigmentation with an incidence of 1–2% worldwide and 0.3–2.5% in India.[3] Although many oral and topical medications are available, results are often unsatisfactory. Nearly 50% of patients seeking therapy for vitiligo were young (age <30 years) suggesting the social and financial burden of the disease. In accordance with another recent study, we saw a higher incidence of the disease in women with the majority having attained the age of marriage when the social stigma attached to vitiligo causes difficulty in finding a spouse.[4]

Phototherapy devices have evolved from large whole-body chambers to lightweight sources that can deliver radiation to specific, small areas. Targeted phototherapy, also known as concentrated phototherapy, focused phototherapy or micro-phototherapy is the latest addition to this spectrum.[7],[8],[9],[10] It involves the delivery of light energy directly to skin lesions through special delivery mechanisms such as fiber-optic cables. Targeted phototherapy has several advantages over conventional phototherapy such as: (a) exposure of involved areas only, thus minimizing side effects; (b) quick delivery of energy, thus shortening duration of treatment sessions; (c) higher doses of energy can be delivered selectively to the lesions, thus enhancing efficacy and achieving a faster response; (d) is helpful in treating difficult areas such as the scalp, nose, genitals and ears as the machine has an easily maneuverable handpiece, (e) ease of administration for children as delivery is handheld and (f) machines occupy less space.[9]

The device used in this study employs a relatively new technology with ultraviolet B phototherapy dispensed through flexible fiberoptics, delivering pinpoint phototherapy to small lesions for targeted exposure. It allows precise control of the duration and intensity of the treatment on lesional skin without affecting non-involved areas by means of an integrated timer and a light meter. For treatment of scalp and other hairy areas, a hairbrush pattern of the fiber optic at the patient's end delivers energy through 55 filaments ensuring adequate treatment of scalp skin.[12]

Most targeted phototherapy devices (laser and non-laser types) emit radiation in the ultraviolet-B range with peak emission in the narrowband wavelength (around 308–311 nm) whereas some light-based non-laser machines emit ultraviolet-A radiation also. Ultraviolet B radiation causes stimulation of melanocyte-stimulating hormone and increased melanocyte proliferation. It also enhances the production of vitamin D metabolites which stimulate melanogenesis. Ultraviolet A radiation may also produce similar effects. Targeted phototherapy may induce all these effects in a more aggressive way because of the delivery of super-erythemogenic doses of radiation. It has also been suggested that the enhanced efficacy of these devices may be due to their ability to deliver the energy to deeper dermal levels and targeted therapy may therefore affect hidden target cells such as melanocytes.[10]

In a recent study on targeted phototherapy by Majid, 40 patients of vitiligo were treated with the Levia targeted ultraviolet B phototherapy machine twice weekly up to a maximum of 30 treatment sessions.[13] A total of 77.5% patients achieved repigmentation ranging from 50% to 100%. A rapid onset of repigmentation as early as in the second week of treatment with 90–100% repigmentation in 46.6% of lesions were notable findings. The best response was seen on the face and neck. It was also observed that patients who did not show any further repigmentation after 10 treatments eventually showed a poor response.

A device with a focused beam of ultraviolet B microphototherapy (Bioskin) was studied for its effectiveness in eight cases of segmental vitiligo by Lotti et al.[14] At the end of 6 months, three patients had complete repigmentation, two had 75–100% repigmentation, another two had 50–75% repigmentation and one had <50% repigmentation. However, the study population was much smaller than in our study.

Leone et al. in a study using excimer laser found that the response in 6 months (approximately 24 weekly sessions) failed to change the treatment score as opposed to conventional narrowband ultraviolet B treatment where the patient may show a response after 3–4 months.[15] This study showed a change in response from poor to moderate/excellent with an increase in the number of treatment sessions.

The Daavlin T500x high-dose targeted phototherapy system is another broadband ultraviolet B phototherapy device used in the treatment of vitiligo. Akar et al. treated 32 patients (14 male, 18 female), aged 18–65 years, with multiple treatments (up to 60) with this device.[16] In contrast to our findings, only 12.5% of patients with facial lesions showed visible repigmentation in this study, where the device was from the same parent company.

Since an inclusion criterion in our study was the completion of 11 or more treatments, it is possible that signs of a clinical response made the patients compliant to the therapy, further improving the outcome. Though a maximum of 60 weekly therapy sessions were possible in the study period of 15 months, the highest number was actually 49. Other notable features of our study are the larger study population comprising all types of vitiligo, and weekly treatment sessions. Although ours was a relatively large study population, controls were not included. The effects of adjuvant therapies that patients received simultaneously were also not assessed.

We would like to acknowledge Dr. Mamta Shewte, Assistant Professor, Department of Community Medicine, Chirayu Medical College, Bhopal for her expert statistical analysis.

The authors certify that they have obtained all appropriate patient consent forms. In the form the patient(s) has given her consent for her images and other clinical information to be reported in the journal. The patients understand that their names and initials will not be published and due efforts will be made to conceal their identity, but anonymity cannot be guaranteed.