An 81-year-old Taiwanese woman presented with a 2-month history of an asymptomatic reddish tumor on her right cheek. The tumor had grown rapidly recently. She reported no previous history of melanoma or non-melanoma skin cancers. Prior trauma in this area was also denied. On examination, the tumor appeared as a solitary, dark red mass measuring 1.5 × 1.3 cm in diameter with erosion on the surface [Figure - 1]. No regional lymphadenopathy or systemic symptom was noted. The histopathological examination revealed a well-circumscribed tumor in the dermis with epithelial collarette and adjacent solar elastosis. No invasion into subcutaneous fat was found. The tumor was mainly composed of admixtures of pleomorphic spindle and epithelioid cells with bizarre nuclei and some multinucleated giant cells. Atypical mitotic figures were also present. In addition, immunohistochemical study demonstrated strong cytoplasmic staining for CD68. Stains for cytokeratins, S-100, and desmin were all negative [Figure - 2],[Figure - 3],[Figure - 4],[Figure 5]. 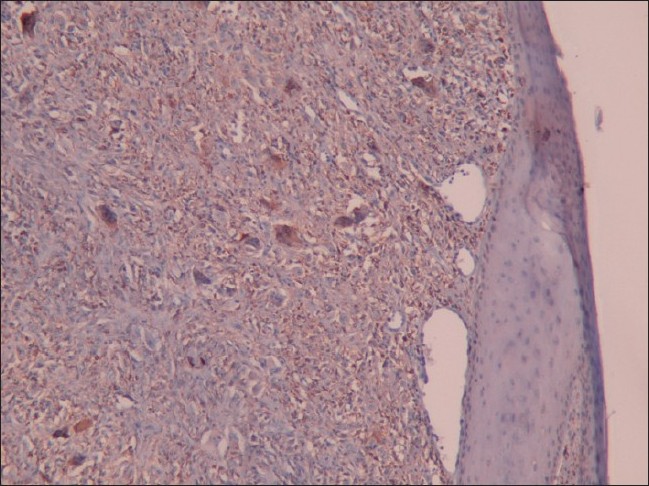 Figure 5: Strong positive cytoplasmic staining with CD68 (CD68; ×100) (The epidermis adjacent to the tumor shows negative CD68 staining as a built-in negative control) Stains for cytokeratins, S-100, and desmin were all negative

What is your Diagnosis ?

Atypical fibroxanthoma (AFX) was first defined by Helwig in 1961. [1] It usually presents as a rapidly enlarging, firm, and solitary nodule, which is often eroded or ulcerated, especially on sun-damaged skin in elderly individuals. AFX most commonly occurs in the head and neck region and has a male predominance. [2] Ultraviolet-induced p53 gene mutations are involved in the pathogenesis of AFX and immunoexpression of ultraviolet photoproducts (cyclobutane pyrimidine dimers) further supports this theory. [3]

Histologically, classical AFX is composed of atypical histiocyte-like (epithelioid) cells admixed with pleomorphic spindle cells and multinucleated giant cells, any or all of which may show pleomorphism, hyperchromasia, and frequent mitoses including abnormal ones. The majority of the lesions are located in the dermis and superficial invasion of subcutaneous tissue with mainly expansile rather than infiltrative growth may also be noted. Other histological features include surface ulceration, solar elastosis, epidermal collarette, hemorrhagic space, and inflammatory cell infiltrate at the periphery of tumor or intratumorally. Immunohistochemically, tumor cells of AFX demonstrate positive and non-specific staining for CD68 and vimentin but negative against cytokeratins, S100, and desmin. [4]

AFX is still a diagnosis by exclusion. No single reliable immunohistochemical marker for AFX has been found. A panel of antibodies is needed to establish the diagnosis and to exclude other neoplasms with similar histological features. The major pathological differential diagnoses include spindle cell squamous cell carcinoma, spindle cell melanoma, and leiomyosarcoma. [4] However, the negative stains for cytokeratins, S100, and desmin can reasonably rule out the above diagnoses. As for malignant fibrous histiocytoma (MFH), the exact relationship between these two neoplasms remains controversial except for the obvious difference in the depths within the cutis. Despite the initial reports to use CD99 or CD117 to help differentiate AFX from MFH, further researches fail to support their specificity and sensitivity. CD10 positivity may provide help to diagnose AFX when there is strong, diffuse membranocytoplasmic staining. [5]

Despite the malignant histological features, the prognosis for AFX is usually optimistic after complete surgical removal due to its low metastatic rate. Surgical intervention is considered the treatment mainstay. In comparison with wide local excision, Mohs micrographic surgery provides a lower rate of recurrence because of its ability to thoroughly evaluate the surgical margin. [6]

Compared with western countries, AFX is fairly rare in non-Caucasians. This is perhaps due to a darker skin complexion, but other genetic or environmental factors may also be important. AFX should be considered as part of the differential diagnosis when the tumor is located on actinically damaged skin of elderly patients.