A study of autologous melanocyte transfer in treatment of stable vitiligo 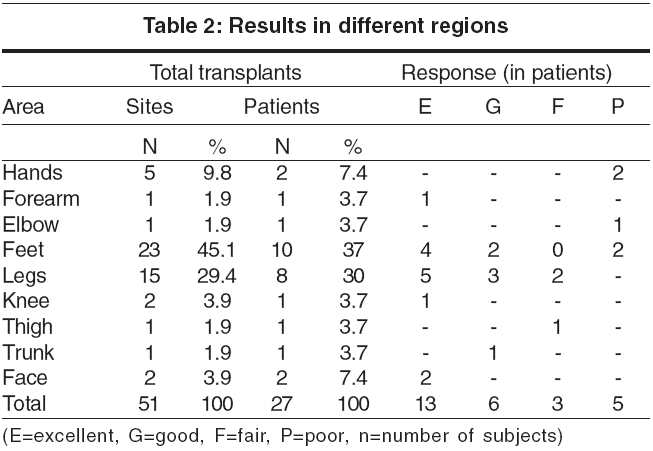 Patients with stable vitiligo were selected for the study, the criteria for stability being no increase in the size of the lesion for at least 2 years and no new lesions since the last 2 years. Exclusion criteria were patients with active disease, infection at the recipient site, age below 8 yrs, evidence of K φebner response in the past, bleeding diathesis, keloidal tendencies and poor general condition. The study was conducted at Department of Dermatology, Civil Hospital, BJ Medical College, Ahmedabad in a span of 3 years. Patients were chosen randomly after they met the selection criteria. Out of the 27 patients recruited, a single vitiliginous lesion was taken as a control in 20 cases. The control patch was only superficially dermabraded and subsequently dressed.

Pre-operative work-up consisted of informed consent, a clinical photograph, screening for HIV and Hepatitis B virus infection and charting of the area to be grafted. A prophylactic course of an antibiotic, usually oral erythromycin 500 mg thrice daily, was started 1 day before the procedure and alprazolam 0.5 mg was administered orally on the previous night.

Two techniques were employed, the autologous melanocyte rich cell suspension (non-cultured) technique[1],[2],[3] and the cultured melanocyte technique. [4],[5],[6] Both these techniques share a common principle of selective replenishment of melanocytes at the recipient stable vitiligo macules. The culture technique was used when the harvested melanocytes were less than required, when counted with Neubauer′s chamber.

Donor site About one-tenth the size of the recipient area was selected as the donor site, usually on non-cosmetically important sites like the thighs, buttocks or waist. It was cleaned with povidone iodine (BetadineÓ) and 70% ethanol, and draped. The site was anesthetized with 1% lidocaine (XylocaineÓ) infiltrated in the subcutis. The skin was stretched and a very superficial sample was obtained with Silver′s skin grafting knife or a sterile razor blade on a straight hemostat forceps. The superficial wound was then dressed with Sofra-tulleÓ.

Laboratory procedure for cell separation[3] The skin graft was immediately transferred to 6 ml of 0.25% trypsin-EDTA solution in a petri dish. This sample of skin graft inside the petri dish was turned back and forth to ensure complete contact with trypsin-EDTA solution. This mixture of skin sample with trypsin-EDTA solution was incubated at 37°C and 5% CO2 for 50 minutes. Three ml of trypsin inhibitor (soya protein solution; Sigma Chemicals, St. Louis, Mo, USA) was then added to neutralize the action of trypsin. The epidermis was separated from the dermis with the help of a pair of forceps. The epidermis was cut into tiny pieces and transferred to a 15 ml test tube with a pipette. Three ml of MK medium (Melanocyte-keratinocyte culture medium; Sigma Chemicals, St. Louis, Mo, USA) was added to it. The contents of MK Medium were DMEM (Dulbecco′s Modified Eagle′s Medium), insulin (25 µg), adenine (0.38 nmol), basic fibroblast growth factor (b-FGF), [7],[8],[9],[10] human albumin [or fetal calf serum (10%)], hydrocortisone (0.1 µg/ml), streptomycin (0.1 mg/ml) and penicillin (100 u/ml). All materials used were tissue culture grade (endotoxin level < 0.1EU/ml chrome-LAL test). The test tube was then centrifuged at 2000 rpm for 10-15 minutes. A pellet was formed at the bottom. The supernatant was discarded and the pellet, containing cells from the stratum basale and lower half of the stratum spinosum that were rich in melanocytes, was taken. The melanocytes were stained with trypan blue and counted simultaneously with Neubauer′s chamber under the light microscope; this would also identify whether the suspension was viable as the dead cells pick up blue stain. Around 1000-1500 cells/mm2 of recipient area were required;[8] when the separated cells were less than 1000 cells/mm2 they were subjected to cell culture.

Recipient site It was cleaned, painted and draped with BetadineÓ, 70% ethanol and washed thoroughly with normal saline. It was anesthetized with use of EMLA (PriloxÓ) or 1% lignocaine.

Transplantation[1] The recipient area was abraded with a high-speed motor dermabrader fitted with a diamond fraises wheel until tiny pinpoint bleeding spots were seen, which implied that the dermoepidermal junction had been reached. The denuded area was covered with a saline moistened gauze piece. The suspension was poured evenly from the pipette to the denuded surface, which was then covered with a collagen dressing (KollagenÓ 5x5). This was then covered by a small gauze piece moistened in MK medium. The dressing was kept in place by a TegadermÓ dressing.

The patient was allowed to go home 30 minutes later. The dressing was removed at their first follow-up visit after a week to the hospital.

Preparation of autologous culture of melanocytes[4] The graft was harvested in a similar manner as above. The tissue was transferred to a Petri dish containing 6 ml of 0.25% trypsin-EDTA solution with the help of a pair of forceps and incubated for 50-60 min at 37°C and 5% CO2. Later, a few milliliters of trypsin inhibitor were added to neutralize the action of trypsin. The epidermis was separated and cut into tiny pieces by the help of a small surgical knife and the entire content was transferred into a centrifuge tube and 3 ml of MK culture medium was added. The tube was then centrifuged at 2000 rpm for 15 minutes. The supernatant was removed and the pellet was taken out with a pipette. It was again re-suspended in 1 ml of MK medium and 0.5 ml of the solution inoculated in a T-25 tissue culture flask. Another 5 ml of MK medium was added to the flask, which was kept in the incubator for incubation with 5% CO2 and temperature of 37oC for a period of maximum of 3 weeks.[4] The medium in the flask was changed daily carefully and incubation continued. Separation of melanocytes from the flask of melanocytes was done with trypsin EDTA solution after the end of 2-3 weeks. Trypsin-EDTA solution was again replaced with MK medium for a few minutes. This solution was further incubated for 5 minutes and then another 5 ml of MK medium was added. The entire content was collected in a pipette and poured into a centrifuge tube. It was again centrifuged at 2000 rpm for 10-15 minutes. The supernatant was discarded and the contents were re-suspended in 0.5 ml of the culture medium. A microscopic preparation of this was made and stained with Trypan Blue to check the viability of melanocytes. Viable melanocytes did not take up the stain and dead cells appeared blue in color [Figure - 1] [Figure - 2]. The melanocytes were counted and the desired number of cells in the form of a certain quantity of suspension (cells/ml) was taken as per the area of recipient site. Around 1000-1500 melanocytes/mm2 were spread uniformly over the recipient surface after superficial dermabrasion. However, in certain areas like the areola, the number of melanocytes implanted was more than 2000 cells/mm2.

At first follow-up, soon after the removal of dressing the treated area appeared bright pink. Repigmentation was first seen after 2-3 weeks after the procedure and was completed in up to 6 months. It was almost of a uniform color. In a few cases, there was initial hyperpigmentation that subsequently faded to match the normal skin color.[1] This hyperpigmentation may be caused by hyperactivity of transplanted cells from the culture or oversupply of growth factors and melanogenic peptides such as β-FGF during wound healing.[1],[7] In most patients we observed pigmentary islands irrespective of leukotrichia or paucity of hair follicles.

The optimum time for successful culture was 1-3 weeks. At the end of 3 weeks, the cell count was raised 50-100 folds after primary culture and subculture. The melanocyte content of these cultures was 95%.

Fifty-one sites in 27 patients were chosen for autologous melanocyte transplantation. The most common sites were the feet (45.1%), legs (29.4%), hands (9.8%), knees (3.9%) and face (3.9%) [Table - 2]. The results were most favorable on the legs, feet, face and forearms, and poor on the elbows and acral areas of the hand. Repigmentation was not observed in any of the control patches.

The repigmentation was best when there were 1500 cells/mm2 or more. In 27 patients, the cells were cultured because of the large recipient area or because the number of cells separated was less than 1000 cells/sq cm of recipient area [Table - 3].

Both, the autologous melanocyte rich cell suspension (non-cultured) technique and the cultured melanocyte technique, are essentially based on the principle of seeding of melanocytes. Melanocyte culture is a state of the art procedure that requires expertise.

Superficial split thickness thin skin grafts (STG) yielded more melanocytes than did punch biopsy samples chiefly because of the larger size of skin harvested and because separation of cells was easier with thinner samples of skin. Moreover, the STG donor sites healed better. The average number of cells kept was 1000-1500 cells/mm2 irrespective of the technique employed. The outcome was optimal when more than 1000 cells form AMRCS/mm2 were kept but was proportionately less when the number was less. The autologous melanocyte rich cell suspension (AMRCS) technique of autologous melanocyte transfer was equally effective for smaller lesions but for a larger recipient area, melanocyte culture (MC) was found more suitable, although the technique of AMRCS was simple and efficient.[11]

Overall, an excellent response was seen in 14 patients (51.8%), a good response in 5 (18.5%), and a fair response in 3 (11.1%). Five patients (18.5%) had a poor response. Response to both techniques was comparable, with an excellent response in 52.2% cases of the AMRCS technique and 50% with melanocyte culture. Repigmentation was generally first observed at 2-3 weeks and was complete by 6 months. It was seen as multiple islands of pigmentation that later coalesced to a uniform color. The location of the recipient site was the major determinant of the outcome; acral parts including the dorsal aspects of the hands and feet, and skin over the joints were less responsive, as 2 patients each with lesions on the hands and feet, and 1 patient with lesions on the elbow had a poor response.[1]

The response was comparable to studies done by Mulekar.[9] In a study in 27 patients, Lontz et al reported excellent response in 40.7%, good response in 7.4%, and moderate response in 51.8%.[1] Lontz et al emphasize that the anatomical location is the major factor that determines the response.[1] The fingers, knuckles and elbows were the most difficult areas to repigment, in part because of the relative uncertainty in controlling the depth of dermabrasion of such heavily cornified areas and also because of the high mobility of the skin covering these joints. Olsson and Juhlin have also made a similar observation.[4]

Both these techniques had some minor complications. Infection at the donor area was seen in 7.4% of patients and at the recipient site in 11.1%. Infection occurred probably because patients did not comply with instructions to avoid unnecessary movements of the neighboring joint and subsequently the dressing slipped. Only 1 patient developed Koebner response at the donor site. None of our patients had milia formation or scarring.

In patients with stable vitiligo, autologous melanocyte transfer is a simple and effective technique to produce homogeneous pigmentation quickly. It has an advantage over conventional split thickness grafting as it requires very little donor skin (usually only one tenth of the recipient site).[9] Patients were generally satisfied with the results as the quality of repigmentation was superior. Further large scale patient studies are required, especially with melanocyte culture methods, to confirm the efficacy of autologous melanocyte transfer techniques[12].