Background: Though infantile hemangiomas are the most common benign tumor of infancy, their etiopathogenesis is not fully understood. Some studies report a diagnostic role for vascular endothelial growth factor (VEGF), but such studies are lacking from India.
Aims: To study the clinicoepidemiological profile of infantile hemangiomas, to estimate and compare the serum levels of VEGF in infantile hemangiomas and controls, and to determine correlations between serum levels of VEGF and growth characteristics of infantile hemangiomas.
Methods: A hospital-based, cross-sectional study was carried out on 30 clinically diagnosed cases of infantile hemangioma and 30 controls presenting with other disorders. VEGF levels were recorded for both cases and controls by the sandwich enzyme-linked immunosorbent assay (ELISA) technique. Results were analyzed using SPSS version 20.0, and their significance determined using appropriate tests.
Results: Mean serum VEGF level in the cases was 216.8 ± 49.2 pg/ml while in the control group it was 115.1 ± 43.1 pg/ml (P < 0.0001). There were no statistically significant correlations between serum VEGF levels and sex or size, phase of growth, morphological variants or ulceration of lesions.
Limitations: Our sample was not large enough to draw clinically applicable conclusions. An adequate sample size could not be achieved because of low incidence of the disease, and resource and time constraints.
Conclusions: The mean value of serum VEGF in the study group was significantly higher than that in the control group, suggesting that serum VEGF can serve as a diagnostic marker of infantile hemangiomas. Mean serum VEGF was higher in proliferative lesions than in involuting lesions, indicating that it may also be useful as a prognostic serological marker in cases of infantile hemangioma.

Infantile hemangioma is the most common benign tumor of infancy affecting 5–10% of infants by the age of 1 year[1] and can be associated with complications in as high as 40% of cases.[2] The etiopathogenesis of infantile hemangiomas is still not fully understood, but an impaired balance between proangiogenic and antiangiogenic factors has been implicated in the development of hemangiomas. Some studies also report a diagnostic role for vascular endothelial growth factor (VEGF) in differentiating hemangiomas from vascular malformations.[3] Studies that describe the clinicoepidemiological features of infantile hemangiomas and the putative role of VEGF in hemangioma proliferation are lacking from India.

This was a hospital-based, cross-sectional, case-control study, and included all clinically diagnosed cases of infantile hemangiomas presenting to the Dermatology Department. The study was approved by the Institutional Ethics Committee.

The growth phase of each lesion was determined by the clinical criteria listed in [Table - 1]. Growth phases of hemangiomas were also differentiated based on lesional color, a bright red corresponding to the proliferative phase [Figure - 1], red to gray to the involuting phase [Figure - 2] and a pale color to the ‘involuted phase’ of hemangiomas.

To correlate VEGF levels with the size of lesions, cases were divided into three groups based on the surface area of the largest lesion: those with reference lesion sized <4 cm2, 4-6 cm2 and >6 cm2.

VEGF levels were determined in cases and controls by the sandwich enzyme-linked immunosorbent assay (ELISA) technique using the human VEGF-A BioLISA kit by DIACLONE. All findings including demographic data, clinical findings and lab results were recorded on a preset proforma. Results were analyzed using SPSS version 20.0 and significance of the results was calculated using appropriate tests such as student's ‘t’ test, Mann Whitney U test, ANOVA test, Pearson correlation coefficient and correlation analysis.

A total of 30 cases and 30 controls were included. Age ranged from 4 days to 24 months in the study group with a mean age of 6.12 months while mean age in the control group was 5.4 months. A majority (36.4%) of the infants were 0–3 months old, and females outnumbered males by a ratio of 1.73:1. Ninety percent of the babies had been delivered vaginally, and 63.3% of the mothers were primigravida. Twenty percent of the mothers gave a history of fever during pregnancy. A total of 16.7% of the mothers had a history of drug intake during pregnancy in the form of oral contraceptives (6.7%), antithyroid drugs (6.7%), and antitubercular treatment (3.3%). Seven babies in the study group were preterm. There was no family history of infantile hemangiomas in any of the cases.

Most (53.3%) of the babies had lesion onset during the first week of life, but it was only during the 2nd month that a majority (43.3%) of the lesions began to proliferate. Sixty percent of cases had single lesions, while the rest had multiple lesions, yielding an average of 1.67 lesions per child. Seventy percent of cases had a superficial variant while the others had mixed type of infantile hemangiomas. The most common site affected was the face (50%), with the forehead being the most common location thereon (5 cases); the lower limbs and the genitalia were the least affected sites (3.3% each). Eighty percent of cases had hemangiomas in the growing phase and 53.3% of the cases had complications, with bleeding being the most common in 26.67% of cases. 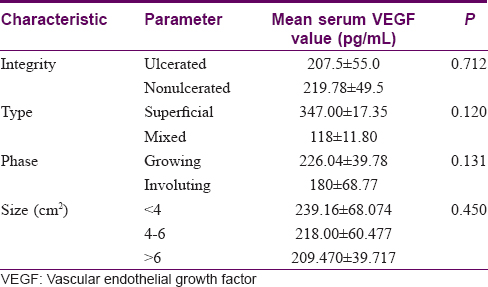 VEGF levels were found to be inversely proportional to the size, although this difference was also not statistically significant.

The word hemangioma is derived from the Greek ‘haima’ meaning blood and the condition was first documented by Liston in 1843. Infantile hemangiomas occur more frequently in female infants,[4] as in our study. Nearly, 70% of our cases had their lesions in the head and neck region. Finn et al. in their study too found that the head and neck are the most commonly affected sites (approximately 60% of cases).[5]

There are several hypotheses regarding the etiopathogenesis of infantile hemangiomas which are not mutually exclusive; most include a role for VEGF in the abnormal proliferation of the endothelial cells. Infantile hemangiomas share many immunohistochemical markers with placental microvessels. The placenta also produces very high levels of the proangiogenic cytokine VEGF; as a protective mechanism against uncontrolled angiogenesis, a soluble VEGF receptor sFlt-1 is also produced by the placenta. Postpartum, the connection to the placenta and subsequently sFlt-1 is removed, which may lead to the unchecked growth of tissues responsive to VEGF, such as infantile hemangiomas.[6],[7] Another theory proposes that infantile hemangiomas may be a result of abnormal proliferation of endothelial progenitor cells, which are bone marrow-derived VEGF receptor (VEGFR-2)-positive pluripotent cells.[8] Missense mutations in genes encoding VEGFR-2 and TEM-8 have been identified in a subset of infantile hemangiomas, which may be responsible for their constitutive activation and resultant hemangioma endothelial cell proliferation.[9] VEGF, a member of the platelet-derived growth factor (PDGF) family, was initially isolated as a tumor-derived factor that increases vascular permeability and subsequently as a mitogen having high specificity for endothelial cells.[10],[11]

There is a paucity of case-control studies of VEGF levels in infantile hemangiomas. In two separate studies by Przewratil et al., it was found that the local serum levels of VEGF were significantly higher than in the peripheral blood, and that serum VEGF levels differed significantly between those with infantile hemangiomas and controls, while there was no significant difference between the sexes.[3],[12] Our study confirms these findings. We too noted that the VEGF levels of those in the growth phase were higher than those in the involutional phase, supporting a possible etiopathogenetic role of VEGF in infantile hemangiomas and its role in the growth of these lesions. However, in both our study and the one by Przewratil et al.[12] the differences were not significant.

The mean serum levels of VEGF was also higher in superficial lesions than in the the mixed variant, perhaps because most of the superficial lesions (70%) were in the growth phase, compared to only 13.3% of the mixed variety. Because there were more than one hemangioma in most of the study cases, it was difficult to correlate VEGF levels with the size of lesions. Contrary to the expected, it was seen that the VEGF levels were inversely proportional to the size of the reference lesion, although the difference was not statistically significant. Studying the volume relation, rather than area, with VEGF levels may have yielded different results but this could not be done due to resource constraints. Of note, Przewratil et al. showed a positive correlation between VEGF levels and the volume of hemangiomas, though the results again were not statistically significant.[3]

Despite its frequency, there are no definite markers for the diagnosis and prognosis of infantile hemangioma. Based on its role in the pathogenesis of infantile hemangiomas, serum and local VEGF levels might fill this gap. Investigative modalities currently available are limited by factors such as radiation exposure to infants, cost, and their limited capacity to delineate lesions. VEGF levels, on the other hand, are easier to determine. We conclude that serum VEGF levels may be related more to active angiogenesis than to other factors, and by serially measuring its levels it may be possible to gauge the progression and natural course of these lesions. VEGF measurements may also help differentiate between infantile hemangiomas and vascular malformations.

The sample size in this study was only enough to draw preliminary conclusions; a larger sample size is needed to arrive at clinically meaningful conclusions. We could not include a larger sample because of low incidence of the disease, and resource and time constraints. Correlations between the volume of infantile hemangiomas and VEGF levels could not be looked at due to a lack of resources for lesional volume measurements.

There are very few published studies on serum VEGF levels in cases of cutaneous infantile hemangioma. To our knowledge, no such study has been conducted in this part of the world. Based on our study and published literature, we recommend that further studies be conducted, including larger numbers of cases, to study the levels of serum VEGF in cases of infantile hemangioma and their correlations with various parameters.