Background: Erythematous tender nodules predominantly involving extremities are frequently encountered in dermatology and rheumatology practice. They are diagnosed based on distinct clinical and histopathological features. However, in clinical situations, considerable overlap is observed that poses a diagnostic challenge. We undertook a study on clinico-histological patterns of inflammatory nodules over extremities. Methods: After detailed history and examination, a preliminary clinical diagnosis was made in 43 cases, followed by skin biopsy from representative nodules. Histological diagnosis made was correlated with clinical features. Results: Of 43 cases, a single clinical diagnosis was made in 25 (58.5%) cases while in the remaining cases more than one diagnosis was considered. On correlating with the histopathological diagnosis, concordance was observed in 51% cases while the remaining showed either histological discordance with clinical diagnosis (14% cases) or were kept in the undecided category (35% cases). Conclusion: Considerable clinico-histological overlap was observed in inflammatory nodules over extremities. Histopathology alone was not helpful in differentiating one entity from another at all times since variable histo-pathological patterns were seen.
Keywords: Clinico-histopathological features, erythematous tender nodules, extremities

Inflammatory nodules involving the extremities are frequently encountered in dermatology and rheumatology practice. They may be the primary disease or a manifestation of underlying systemic involvement, infection, drug reaction, connective tissue disease or malignancy. This group of dermatoses has been classified based on clinical histopathological, and immunopathological features. [1],[2] Clinico-pathological features of each entity have also been evaluated independently. [3] However, considerable clinical and histopathological overlap exists making it diagnostically challenging for the treating physician. We undertook this study to evaluate histopathological patterns and establish clinico-pathological correlation in patients presenting with inflammatory nodules over extremities to our large tertiary care teaching hospital in north India.

It was a prospective study conducted between October 2009 and June 2011. The study was cleared by the ethics committee at ourinstitute and informed consent from all patients was obtained. Consecutive patients with tender erythematous nodules predominantly involving the extremities, excluding pyogenic infections and erythema nodosum leprosum, were subjected to detailed history followed by a thorough clinical examination. A clinical diagnosis was made by two dermatologists based on characteristic clinical features described for each entity (Annexure 1). The features included 1) sites of predilection of nodules over extremities, 2) course of disease, 3) sequelae of lesions and 4) other associated signs and symptoms. If the clinical manifestations did not strictly conform to one particular disease and showed overlapping features, differential diagnoses were kept instead of a single diagnosis.

A total of 43 patients were recruited. There were 21 men and 22 women with ages ranging from 11-65 years (mean ± SD: 37.41 ± 12.7 years). In 25 cases, one clinical diagnosis was considered, while differential diagnoses were kept in the remaining 18 cases. Of 25 cases in whom a single condition was suspected, there were 17 cases of erythema nodosum [6 men and 11 women, ages ranging from 13-65 years, mean ± SD: 40.41 ± 12.52 years], 3 of erythema induratum, 2 each of lupus panniculitis and cutaneous medium vessel vasculitis and one case of superficial thrombophlebitis. Overall, the clinical diagnosis of erythema nodosum was considered in 30 (70%) cases, cutaneous medium vessel vasculitis in 15 (35%), erythema induratum in 12 (28%), lupus panniculitis in 5 (11.6%), superficial thrombophlebitis in 3 (7%), subcutaneous panniculitic T-cell lymphoma (SPTCL) in 3 (7%), and other panniculitides in one patient (2.3%) each [Table - 1]. 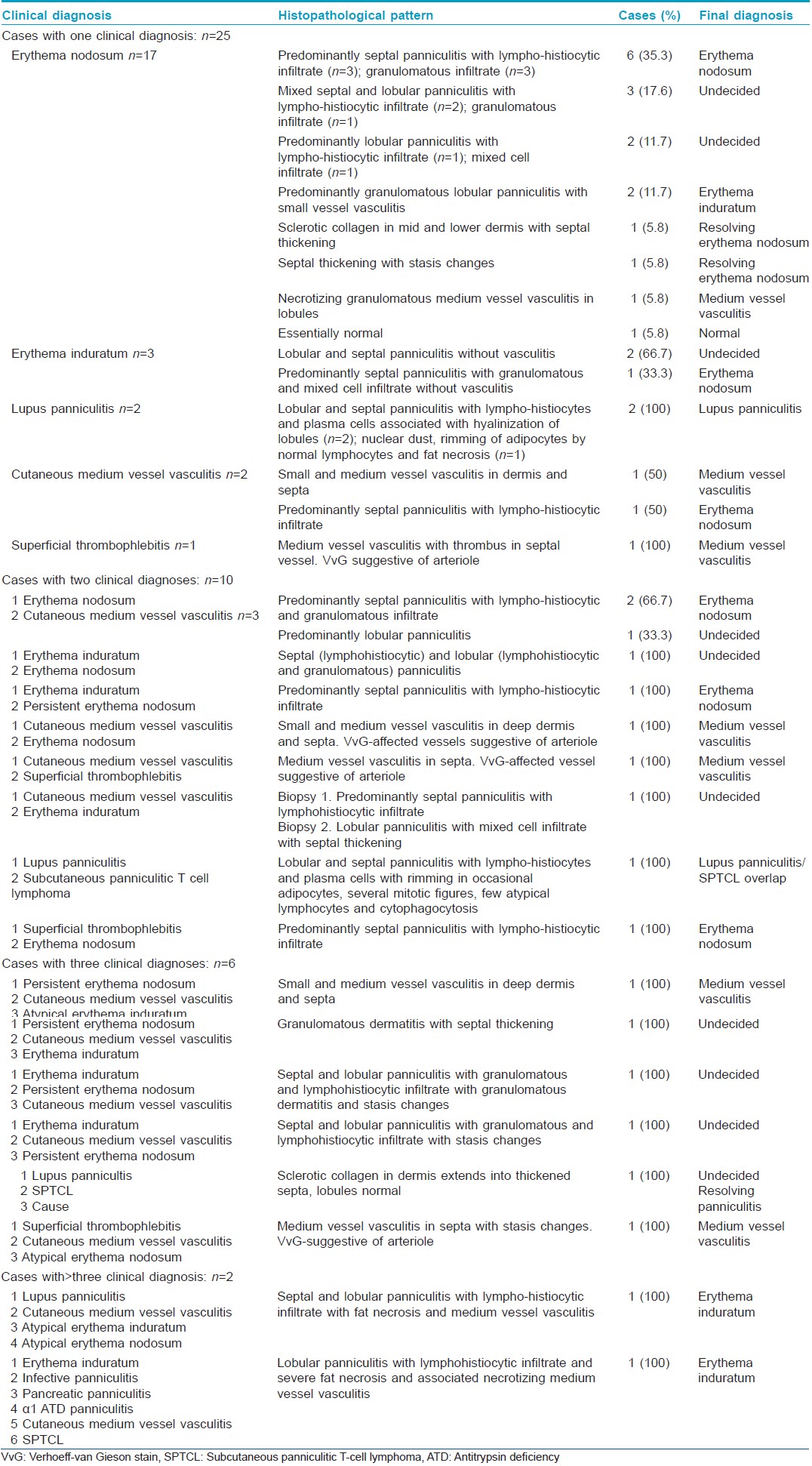 Histopathologically diagnosed cases were again analysed to assess the various clinical patterns that emerged. In histopathologically confirmed erythema nodosum (n = 14), classically described clinical features of erythema nodosum (involvement of predominantly the anterior aspect of legs resolving with hyperpigmentation in 7 days to 2 months) were observed in 12 (85.7%) cases, while atypical features like linear distribution of nodules and involvement of predominantly the posterior aspect of legs in 2 (14.3%) each and persistence of nodules (presence for >2 months and resolving with hyperpigmentation only) in one (7%) case was also observed. Two (50%) of 4 cases with confirmed erythema induratum had lesions predominantly over the posterior legs while the other two developed lesions predominantly on the anterior legs along with lesions on arms, thighs, forearms and abdomen. In three (75%) of four cases lesions resolved with hyperpigmentation only in 2 to 12 weeks, while in one patient, the nodules ulcerated and healed with atrophy and scarring. In all seven cases with confirmed cutaneous medium vessel vasculitis, nodules occurred on both anterior and posterior aspect of limbs with predilection for sites around ankles and wrist in three (43%) cases and nodules resolved with hyperpigmentation only in a week to 2 to 6 months in six (85.7%) patients. Linear arrangement of nodules (three cases), association with livido reticularis (one case) and ulceration (one case) were the other features observed. Lupus panniculitis involved the proximal extremities with a few nodules occurring on distal extremities and face which were either persistent or subsided with atrophy or hyperpigmentation in 1 to 4 months. The only case of lupus panniculitis/subcutaneous panniculitic T-cell lymphoma overlap involved proximal extremities and trunk and the nodules resolved with subcutaneous atrophy or hyperpigmentation in 1-3 months.

We analysed the clinico-histopathological patterns of erythematous tender nodules predominantly involving the extremities in 43 cases.

In our study, in 2 (4.7%) cases, lupus panniculitis was the only clinical diagnosis and the diagnosis was suspected in 5 (11.6%) cases overall. Histopathology consistent with this condition was observed in both (100%) cases where this was the only clinical diagnosis and in 3 (60%) cases where it was included as a differential diagnosis. No case showed lymphoid follicle formation or epidermal and dermal changes of lupus erythematosus. Sanchez et al.,[13] observed sufficient histopathological features to make a diagnosis of lupus panniculitis in 72% of cases; these changes included hyaline fat necrosis, fibrin deposits and a mixture of neutrophils, plasma cells and histiocytes in 69% of cases, lymphoid nodules in 55% of cases and epidermal and dermal changes in 24% and 6.9% of cases respectively. Ng et al.,[14] observed fat necrosis in all 12 cases of lupus panniculitis, lobular and paraseptal inflammation with lymphocytic vasculitis in four (33.3%) and dermal changes of lupus erythematosus in eight (66.7%) cases but no lymphoid nodule formation. In our histopathologically confirmed lupus panniculitis cases, the majority had a classical clinical presentation (involving proximal extremities, face) with a few developing nodules over the distal extremities and trunk, a finding that has also been reported in previous studies. [15] We had clinically suspected subcutaneous panniculitic T-cell lymphoma in three (6.9%) cases, of which one case (33.3%) showed a histolopathogical pattern overlapping with lupus panniculitis and the other two showed features of erythema induratum and resolving panniculitis. Pincus et al.,[16] have described 5 cases of lupus panniculitis/subcutaneous panniculitic T cell lymphoma overlap that showed clinical features of lupus panniculitis in some cases and serological and/or extracutaneous end-organ abnormalities of SLE in all cases. Histologically, all cases showed lobular infiltration by atypical lymphocytes with evidence of dermal changes of lupus erythemaosus in three cases and lymphoid nodules containing CD20+ cells in the lobules in one case.

In two (4.7%) cases, cutaneous medium vessel vasculitis was our single clinical diagnosis; this was corroborated histologically in one (50%) case while the other case was consistent with erythema nodosum. Overall, this diagnosis was suspected in 15 (34.9%) cases with histological agreement in 5 (33.3%) and discordance in 33% cases. Histologically confirmed cases of cutaneous medium vessel vasculitis (n = 7, 16.3%) had preferential involvement around ankles and wrist in three (43%) cases, with lesions resolving with hyperpigmentation alone in upto 6 months in a majority of cases with only one (14.3%) case developing ulceration. Linear arrangement of nodules was seen in three (43%) cases and associated livido reticularis in one (14.3%) case. Of 79 cases of cutaneous polyarteritis nodosa described by Daoud et al.,[17] lesions occurred over legs, arms, and trunk in 97.5%, 32.9% and 7.6% cases, respectively, with livido reticularis and ulceration noticed in a greater number of cases than in our series. Ishiguro et al.,[18] also reported livido reticularis and ulceration in a higher number of patients than we found in our study.

In our study, superficial thrombophlebitis was considered as the only clinical diagnosis in one case and was suspected in three (6.9%) cases. Two of these cases showed histopathological findings of medium vessel vasculitis. Verhoeff-van Gieson (VvG) stain was suggestive of an arteriole in both these cases. The third case showed histological features of erythema nodosum. VvG stain was very helpful in differentiating medium vessel vasculitis from superficial thrombophlebitis in cases that showed inflammation in the vessel wall and thrombus in the lumen but no fibrinoid necrosis. To tell the difference between arterioles and venules, we used the findings described by Chen et al.,[19] who reported that the scanty distribution of elastic fibers in the muscular wall of arterioles compared to the distribution between smooth muscle bundles in venules was more reliable than the presence or absence of the internal elastic lamina or the pattern of smooth muscle in the vessel wall.

Our study suggests a great degree of overlap in this group of dermatoses. It was limited by the fact that biopsies were taken only once in the majority of cases and serial sections of the biopsies were not obtained. By undertaking biopsies at different time intervals in each case or obtaining multiple sections, we may have been able to arrive at a conclusive diagnosis in cases that could not be categorized.

In conclusion, inflammatory leg nodules are a challenging group of disorders. In our attempt to establish a clinico-pathological correlation, we observed that histopathology alone was not helpful in differentiating one entity from another at all times since variable histopathological patterns were observed. Further studies with a larger sample size for each of the groups are required to confirm these findings and to validate the new clinical patterns observed in this study.