The presence of sharply demarcated and symmetrically distributed erythematous plaques, silvery nature of scales, involvement of the thenar and hypothenar eminences and knuckles of hands and insteps of feet, with associated regular and coarse nail pits in the absence of nail-fold lesions, can be taken as features in favour of psoriasis, while ill-defined, usually asymmetrically distributed plaques, with history of prior exudation, suggest dermatitis.[6] However, there can be tremendous clinical overlap between the two conditions. Many a times, the histopathological findings are also similar.[7] A few histological features have been indicated in the literature as clues to the diagnosis of psoriasis in general, including neutrophilic abscesses-containing parakeratosis, thinning of the granular cell layer, neutrophils in the spinous layer and presence of tortuous capillaries in the papillary dermis.[7],[8],[9],[10] However there is paucity of literature comparing the histopathological features of palmo-plantar psoriasis and hyperkeratotic palmo-plantar dermatitis.

We undertook this study to elucidate and compare the histological findings in these two dermatoses.

We undertook a retrospective analysis of all biopsies obtained between 2012-2014 from patients diagnosed with palmo-plantar psoriasis and hyperkeratotic palmo-plantar dermatitis, who had attended the outpatient department of our institute. Group 1 included biopsies from palmo-plantar psoriasis cases who also had concomitant plaque psoriasis [Figure 1a] and [Figure 1b], [Figure 2a]. Presence of sharply demarcated erythematous plaques on palms and soles and similar erythematous plaques elsewhere on the body, covered with whitish semi-adherent scales without prior history of exudation from the plaques were the clinical criteria for psoriasis.

Other dermatological conditions that manifest with papulo-squamous lesions on the palms and soles such as hyperkeratotic tinea pedis/tinea mannum, pityriasis rubra pilaris or palmo-plantar keratoderma were excluded. Hematoxylin and eosin (H and E) stained sections were examined without looking at clinical information and details of histological findings were recorded. The histopathological findings of both the groups were compared. 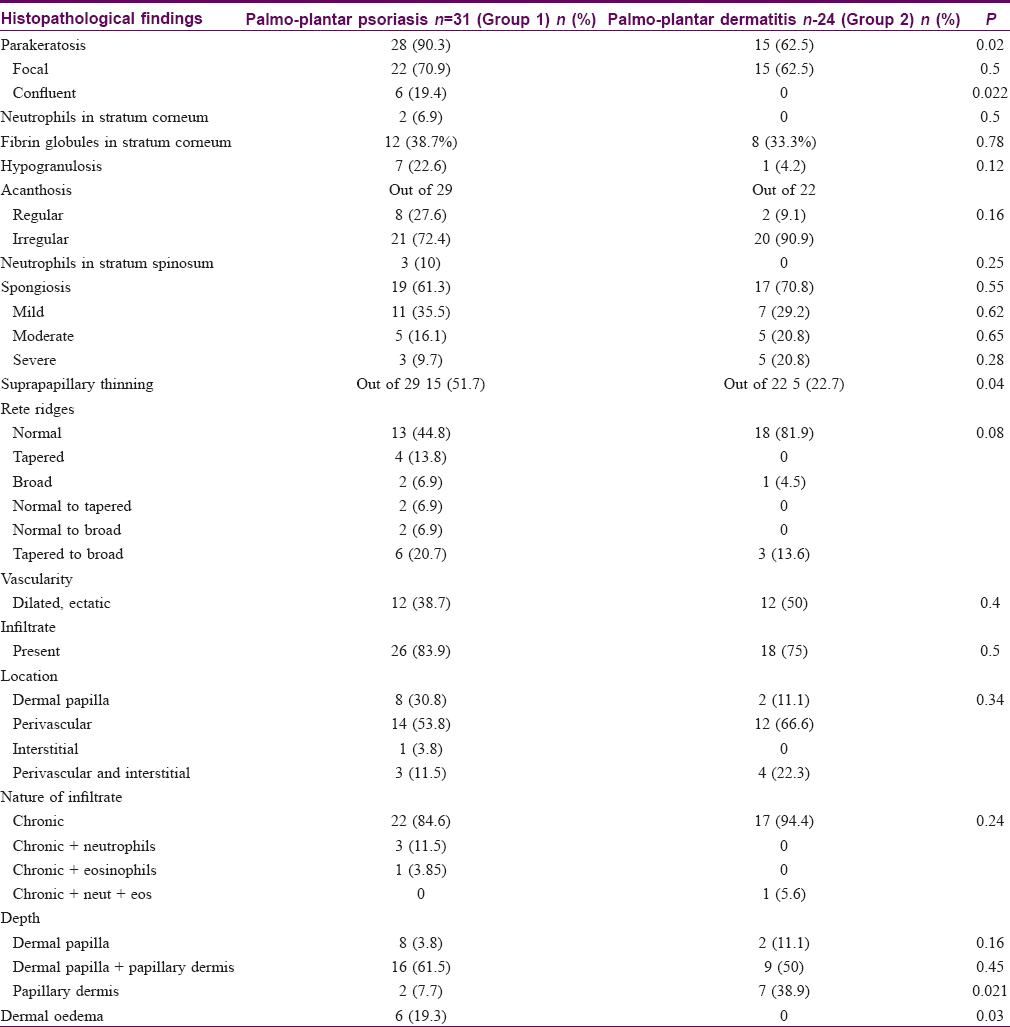 Fibrin globules in the stratum corneum were seen in 12 patients (38.7%) in the psoriasis group [Figure 4a], [Figure 5a] and [Figure 5b] and 8 patients (33.3%) in dermatitis group [Figure 3a]. The difference was not statistically significant (P = 0.78). Neutrophils in the stratum corneum in the absence of fibrin globules were present in 2 psoriasis biopsies but none in dermatitis biopsies (P = 0.5).

Regular acanthosis was observed in 8 (27.6%) and 2 (9.1%) patients of psoriasis [Figure - 3]b and dermatitis respectively while it was irregular in 21 psoriasis (72.4%) and 20 dermatitis cases (90.9%). The acanthosis pattern in 2 patients each in both groups could not be commented on as these were oblique sections. This finding was not statistically significant (P = 0.16).

Neutrophils in the stratum spinosum were seen in 3 biopsies (10%) in the psoriasis group and none in dermatitis group (P = 0.25).

There was no statistically significant difference in the rete ridge pattern between the two groups. Dermo-epidermal junction was normal in all the biopsies in both groups.

Dermal edema was not a conspicuous finding in both psoriasis and dermatitis biopsies, although 19% of psoriasis lesions showed some edema compared to none in the dermatitis group (P = 0.03).

The difficulty in differentiating psoriasis from dermatitis at palmo-plantar sites is well known, given the similarity of clinico-histopathologic features of the two diseases. In our study, a total of 55 palmo-plantar skin biopsies were studied which included 31 of clinically confirmed palmo-plantar psoriasis (Group 1) and 24 of hyperkeratotic palmo-plantar dermatitis. (Group 2). Since the two conditions show considerable clinical overlap, only cases with associated classic lesions of the primary disease elsewhere were included to make the diagnosis and inclusion criteria very robust. Only hematoxylin and eosin (H and E) stained sections were evaluated. Staining of slides with special stains such as periodic acid Schiff (PAS) stain or gomori methenamine silver (GMS) was not undertaken because cases with suspicion/evidence of other papulo-squamous conditions by clinical examination and bed-side investigations (KOH examination for fungus to rule ot tinea mannum/pedis etc.) were excluded.

In this retrospective study, significantly greater number of psoriatic lesions had features of parakeratosis including confluent parakeratosis, suprapapillary thinning and dermal edema. Features such as hypogranulosis, regular acanthosis and presence of neutrophils in the stratum corneum and spinosum were more often seen in psoriasis, but did not reach statistical significance. Both psoriasis and dermatitis biopsies showed spongiosis (61% vs 71% respectively), although severe spongiosis with formation of spongiotic vesicles was more often seen in dermatitic lesions. Other histological features like focal parakeratosis, presence of fibrin globules within stratum corneum, irregular acanthosis, dilated and ectatic vessels, type and location of the inflammatory infiltrate were comparable between the two groups.

Previous studies have shown that features helpful in differentiating dermatitis from psoriasis are the presence of mostly intact granular layer, spongiosis, sometimes evolving to vesiculation, irregular epidermal hyperplasia and presence of eosinophils in dermatitis, while neutrophils in the stratum corneum, hypogranulosis, regular acanthosis and suprapapillary thinning favour psoriasis [Table - 2].[11] 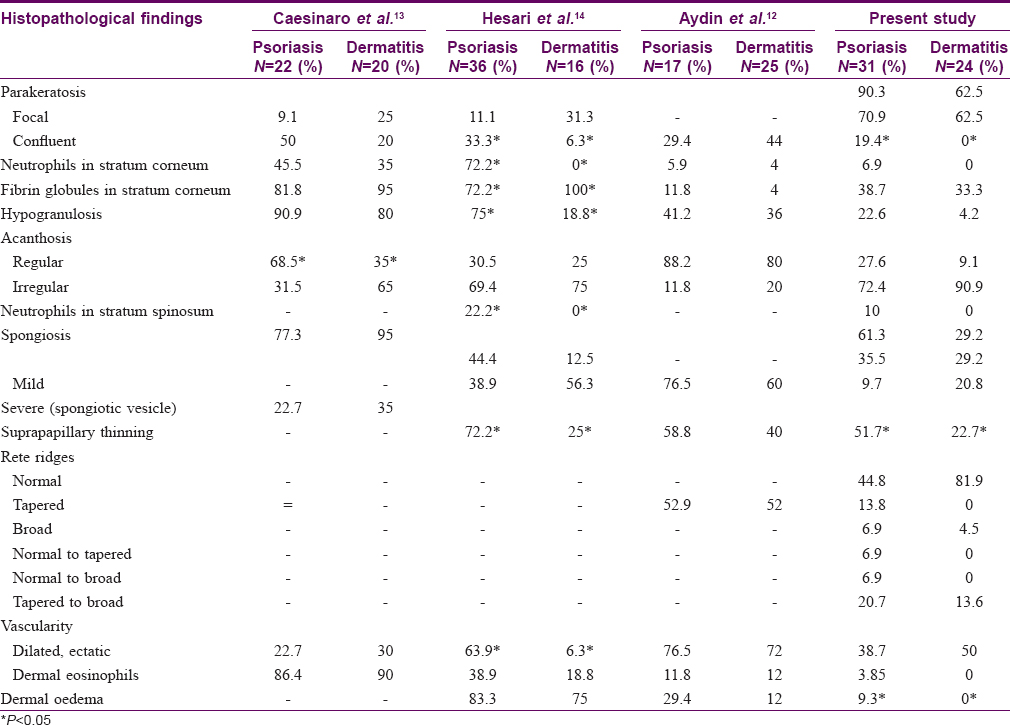 A decrease or absence of granular layer in the suprapapillary area is an important finding in psoriasis. However in our study, hypogranulosis, although observed more often in psoriasis than dermatitis (22.6% vs 4%), did not reach statistical significance (P = 0.12).

Our study did not support the previous view of presence of neutrophils in the stratum corneum as a consistent finding in psoriasis. In fact neutrophils were present in the stratum corneum in only 2 psoriasis biopsies and in stratum spinosum in 10% of psoriasis cases. This feature was absent in dermatitis. Spongiosis, mostly in the lower half of the epidermis, has been observed to be a prominent finding in palmo-plantar psoriasis and may be so prominent that it can resemble dermatitis.[7] In our study, spongiosis was detected in 61% of palmo-plantar psoriasis and to a slightly greater extent (71%) in palmo-plantar dermatitis, although severe spongiosis with formation of spongiotic vesicles was seen in just 9.7% of psoriasis as against 20.8% of dermatitis biopsies. These findings are in accordance with previous studies which have stated that spongiosis is not a useful feature to differentiate between these two conditions occurring on palmo-plantar aspects.[8]

Abnormal vascularity (dilated, ectatic vessels) was seen in 38.7% of our palmo-plantar psoriasis and 50% of dermatitis biopsies, suggesting that this important histological manifestation of psoriasis may not be useful in the diagnosis of psoriasis of the palms and soles. This was concordant with the observations of Cesinaro and Aydin et al., although Hesari et al. demonstrated dilated vessels in 64% of palmo-plantar psoriasis as against just 6.3% of dermatitis, and considered this finding to be a strong pointer towards psoriasis.[12],[13],[14] The nature of dermal inflammation was similar in the two groups. The infiltrate was predominantly lymphocytic, but neutrophils in association with chronic inflammation were seen in 11.5% of psoriasis cases. Eosinophils interspersed with chronic inflammation were seen in an occasional case in both conditions. A feature noted in this study was exclusive presence of inflammatory infiltrate in the papillary dermis without associated involvement of the dermal papilla in significantly greater proportion of palmo-plantar dermatitis than psoriasis (P = 0.021)

Dermal oedema was seen in 19% of psoriasis and none of the dermatitis biopsies (P = 0.03). Aydin and Hesari et al. also observed dermal oedema more commonly in their palmo-plantar psoriasis cases than eczema, but the results were not statistically significant.[12],[14]

In conclusion, differentiation between palmo-plantar psoriasis and dermatitis may be difficult in view of significant clinico-histopathological overlap, necessitating a close follow-up of these cases. In our study, features such as confluent parakeratosis, suprapapillary thinning and dermal oedema were observed in a significantly greater number of psoriasis biopsies, while presence of an inflammatory infiltrate confined to the papillary dermis only without associated involvement of the dermal papilla was the only finding that reached statistical significance in dermatitis.

In view of the tremendous difficulty in differentiating these two conditions both clinically and histologically, recently, the two-gene test has been proposed, which can precisely discriminate between the two entities by identifying two best classifier genes, NOS2 and CCL27.[15] In a cohort of eczema (n = 28) and psoriasis patients (n = 25), these genes diagnosed all patients correctly and also identified initially misdiagnosed or clinically undifferentiated patients.

There is tremendous difficulty in differentiating between palmoplantar psoriasis and dermatitis histologically due to several overlapping histopathological features.

We thank Dr. Manoj K Singh and Dr. Sudheer Arava, Department of Pathology, AIIMS, New Delhi, for allowing us access to the glass slides of the study patients.