The incidence of diabetes mellitus (DM) is on the rise. Insulin forms an indispensible part in the management of patients with DM. Acanthosis nigricans (AN) is a hyperpigmented, hyperkeratotic, velvety plaque, occurring commonly over the posterior aspect of the neck, axilla, and groins. AN as a local side effect of insulin injection is very rare. Herein, we report two patients with type 1 DM (T1DM) developing AN over the site of insulin administration.

A 21-year-old female, a case of T1DM since 5 years of age presented with painless progressive loss of vision in both eyes. Since childhood, she had been receiving biphasic isophane insulin injection (Human Mixtard, Novo Nordisk, Denmark), in a dose of 10 units. Her father used to administer the insulin over the posterior aspect of both upper arms, twice daily. The type of insulin and site of administration were same throughout the past 16 years. Cutaneous examination revealed two well-defined brownish-black, velvety to verrucous plaques, localized over the posterior aspect of both upper arms, measuring about 3 × 5 cm in size [Figure - 1]. Her father could not recall the exact duration of these lesions. No other lesion with similar morphology was seen over any other body part, including the neck, axillae, or groin. Laboratory investigation revealed elevated HbA1c (9.8%). A 4 mm punch skin biopsy was obtained from the lesion over the posterior aspect of the left upper arm. Histopathologic examination revealed thinned out epidermis at the tip of papillae with papillomatosis and irregular acanthosis. The stratum corneum showed loose basket weave orthokeratosis. Dermal papillae showed finger like projections with mild perivascular edema and mild lymphocytic infiltrate in dermis [Figure - 2]. This characteristic histologic features appropriately describes the observed clinical features of the lesion, confirming the diagnosis of AN. Another, 25-year-male diagnosed with T1DM, complained of asymptomatic hyperpigmented lesions around the umbilicus [Figure - 3]. He used to self-administer the insulin (MIXTARD-30 flexpen) over the periumbilical region, since 2 years. The lesions appeared since initiation of this treatment and gradually darkened. On examination, brownish-black, velvety plaques were observed on periumbilical region. A punch skin biopsy from the lesion revealed the characteristic features of AN.

AN is classified into eight types, including medications associated AN [Table - 1]. [1] AN as a local cutaneous side effect of insulin injection is very rare. The first case was described by Erickson et al., [1] in a 52-year-old man with diabetes injecting isophane insulin suspension [Neutral Protamine Hagedorn (NPH) insulin] over the anterior aspects of both thighs. However, because this form of reaction to subcutaneous insulin injections was one of the first in its kind, it was not labeled as AN. Fleming and Simon, [2] described a case of 57-year-old male patient who manifested AN over the anterior aspects of thighs at the site of injection of beef-pork insulin suspension. Later similar presentations were reported in two more cases of diabetes, developing AN over lower abdomen. [3],[4] 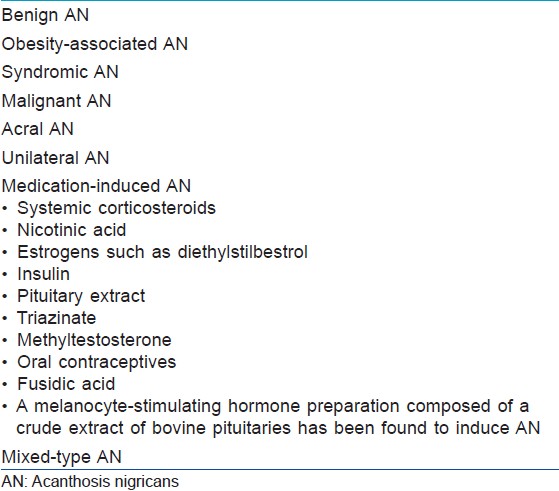 The cases presented here are different in terms of age of the patient and type of diabetes. Our index case is the first patient developing AN over an aberrant site of insulin administration, that is, posterior aspect of both upper arms. The exact pathomechanisim for the occurrence of AN localized to the site of insulin administration has not been clearly elucidated. Patients with AN have a possible finding of a state of insulin resistance with higher than normal plasma insulin levels regardless of carbohydrate tolerance. [5] Insulin-like growth factor 1 receptor (IGFR) and tyrosine kinase receptors (epidermal growth factor and fibroblast growth factor receptor) might play a role in the pathogenesis of AN. [6] At high concentrations, insulin exerts more potent growth-promoting effects, [6] acting via both classic insulin receptors and IGFR located over the fibroblasts and keratinocytes, leading to hyperkeratosis, papillomatosis, and acanthosis. [7] This hyperkeratosis, papillomatosis, and acanthosis are characteritic of AN. As it has been previously hypothesized, [3] inadequate absorption of insulin through the AN lesion might have lead to the highly uncontrolled blood glucose in our patients.

This report illustrates an uncommon cutaneous side effect of incorrectly administered insulin, that is, AN in young T1DM patients. Regular rotations of the insulin injections, [2],[3],[4] along with, topical keratolytics like salicylic acid, [4] lactic acid, can be tried for its treatment. Apart from prescribing the correct insulin, it is also essential to guide and educate patient regarding the proper technique of insulin administration, as it will not only avoid lipodystrophy but also AN.