Adalimumab-induced pyoderma gangrenosum in a patient with hidradenitis suppurativa: A paradoxical reaction

Adalimumab is the first recombinant human IgG1 antibody that binds specifically to tumor necrosis factor alpha, and blocks its interaction with tumor necrosis factor receptors on the cell surface. It is often used, in the field of dermatology, to treat psoriasis, and it has recently shown efficacy in both therapy-resistant hidradenitis suppurativa, as well as pyoderma gangrenosum. Of late, reports of paradoxical skin reactions have increased, since the drug is currently being used in an increasing number of indications, including pyoderma gangrenosum.

A 50-year-old male, diagnosed with hidradenitis suppurativa [Figure - 1] 5 years ago, was started on subcutaneous injections of adalimumab, every 2 weeks. After three subcutaneous doses (160, 80 and 40 mg, respectively), he developed multiple, painful skin papules over his lower limbs, which rapidly progressed into ulcers [Figure - 2]. He denied any history off ever, systemic symptoms, trauma or taking any additional drugs. Physical examination revealed a few, well-circumscribed, round erythematous to violaceous plaques, with ulcerated or crusted necrotic centers. Laboratory examinations showed elevated white blood cell count (11.780/μL) and C-reactive protein level (2.4 mg/mL). The patient was admitted with a clinical suspicion of drug-induced vasculitis or pyoderma gangrenosum, and he was administered intravenous methylprednisolone (40mg/12h, at 1mg/kg/day), amoxicillin/clavulanic acid (as bacterial super infection of the ulcerated lesions was suspected), and adalimumab was withdrawn. Within a few days of admission, the cutaneous lesions rapidly improved, developed crusting and diminished in both size and number. The serologic profile and autoimmune blood tests were negative. Chest skiagram was unremarkable. Abdominal ultrasound detected hepatic steatosis. Colonoscopy did not reveal signs suggestive of inflammatory bowel disease. Histopathological examination was compatible with neutrophilic dermatitis [Figure - 3] and [Figure - 4]. Direct immunofluorescence, bacterial, mycobacterial and fungal cultures from skin biopsy specimen were negative. The patient was diagnosed with adalimumab-induced pyoderma gangrenosum. He was given systemic corticosteroids, following which his lesions resolved dramatically, and he was discharged in 6 days.

As anti-tumor necrosis factor therapy is being used widely to treat inflammatory Bowen's disease, rheumatologic diseases and even psoriasis, paradoxical reactions are increasingly being reported. These reactions are either idiosyncratic new-onset lesions, or an exacerbation of a condition that is normally improved by the same anti-tumor necrosis factor agent.[1] These are hard to avoid and predict. Psoriasis seems to be the paradigm of cutaneous reactions, but there are recent reports of pyoderma gangrenosum [Table - 1], hidradenitis suppurativa, vitiligo, sarcoidosis and SAPHO syndrome developing as a result of this class of drugs, thus widening the gamut of new-onset paradoxical effects.[2],[3],[4] The hypothesis about their pathogenesis points to an imbalance in the cytokine milieu.[1] Therein, inhibition of tumor necrosis factor alpha leads to over expression of interferon-alpha, which induces T-cell activation and migration to pathogenic organs, including the skin. Furthermore, tumor necrosis factor alpha has recently been demonstrated to be a key regulator of neutrophil trafficking into and within the lymphatic system, so its blockade could lead to paradoxical cell behavior, in a systemic inflammatory context.[5] Pyoderma gangrenosum is a rare neutrophilic dermatosis of unknown etiology, frequently associated with systemic diseases. It may also result from an adverse drug reaction. On literature review, we only came across three cases of antitumor necrosis factor alpha-induced pyoderma gangrenosum, reported whilst treating rheumatoid arthritis.[2],[3],[4] Our case is exceptional because of its clinical presentation, namely multiple lesions, and the absence of systemic disease except for hidradenitis suppurativa. Despite the well-described association between both conditions (as they share a common pathogenesis and may occur together as a part of PASH syndrome), the absence of causal demonstration, previous paradoxical reaction case reports and the onset of pyoderma gangrenosum lesions after anti-tumor necrosis factor administration reinforce the diagnosis of a drug-induce defect (adverse drug reaction probability scale (Naranjo algorithm = 4, i.e. possible). Considering the relationship between tumor necrosis factor alpha and neutrophil recruitment, as well as the contrasting roles of neutrophils in the pathogenesis of pyoderma gangrenosum and hidradenitis suppurativa, we suggest that treating a disease where these cells are affected by anti-tumor necrosis factors, could lead to an atypical and exaggerated presentation of other diseases with significant neutrophil participation (pyoderma gangrenosum and eventually other neutrophilic dermatoses). Further studies are needed to elucidate immunological alterations involving neutrophil recruitment and activation, other cytokine participation and genetic susceptibility. Another main issue is whether to define these reactions as a specific-drug effect (adalimumab), or an effect of anti-tumor necrosis factor therapy, as a class, on the whole. Specific management of paradoxical reactions still lacks good evidence, and depends solely on the preexisting disease, the type and severity of the reaction, and the existence of alternative treatments for the underlying disease.[1] In these instances, the authors advise to either discontinue, or switch to another anti-tumor necrosis factor agent or to a different class of biological agent. Histopathological examination should always be performed for confirming a paradoxical drug reaction, and intake of additional drugs should be investigated. In case of systemic involvement, or moderate to severe paradoxical disease, the biological agent should be discontinued, and specific treatment of the new onset condition must be started. In cases with mild affliction, the anti-tumor necrosis factor agent may be continued, but close monitoring is mandatory. The activity of the preexisting disease must be evaluated to select the most suitable treatment (considering the possibility to treat both conditions simultaneously). 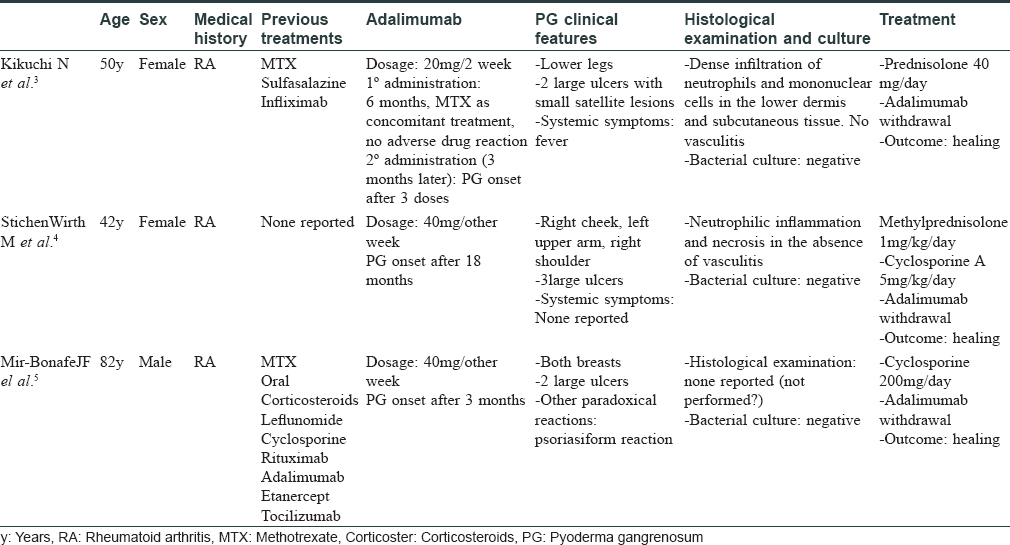 In conclusion, we report a case of multiple lesions of pyoderma gangrenosum occurring as an adalimumab-induced paradoxical reaction, in a patient not affected by rheumatoid arthritis. As adalimumab is being used widely to treat hidradenitis suppurativa in the last few years, the authors wish to alert the audience about the possibility of severe neutrophilic paradoxical reactions while treating a disease with high neutrophil participation. We encourage dermatologists to perform a close surveillance of newly available biological drugs and to reports subsequent paradoxical reactions, to further the list.