Background: A major challenge in the management of adult Henoch–Schönlein purpura is the difficulty in assessing the risk of systemic involvement. There is currently a paucity of data in this area.
Aims: This study sought to determine specific clinical and histopathological features associated with systemic involvement in adult Henoch–Schönlein purpura.
Methods: We reviewed the records of 99 adult Henoch–Schönlein purpura patients who presented at the National Skin Centre, Singapore, between January 2008 and May 2015.
Results: Renal involvement was found in 56 (56.6%) patients, joint involvement in 21 (21.2%) and gastrointestinal involvement in 13 (13.1%). Age > 30 years was an independent predictor of renal involvement with an adjusted odds ratio of 2.97 (95% confidence interval, 1.08–8.16; P = 0.04). Risk factors for significant renal involvement necessitating nephrology referral were further evaluated: the odds were approximately 60% higher for every 10-year increase in age (95% confidence interval, 1.02–2.57; P = 0.04) and patients with cutaneous bullae and/or necrosis had an almost six times higher risk (95% confidence interval, 1.43–25.00; P = 0.01).
Limitations: This study was limited by its retrospective design. We also lacked long-term data to examine how clinical and histopathological characteristics correlated with long-term disease outcomes.
Conclusions: Adult Henoch–Schönlein purpura patients older than 30 years have a threefold increased risk of renal involvement. The risk of profound renal disease necessitating nephrology referral rose significantly with age and the presence of cutaneous bullae and/or necrosis.
Keywords: Adult, cutaneous, gastrointestinal diseases, Henoch–Schönlein purpura, joint diseases, kidney diseases, leukocytoclastic, retrospective studies, vasculitis

Assessing the risk of systemic involvement remains a major challenge in the management of adult Henoch–Schönlein purpura, though recent years have seen a growing interest in investigating predictors of systemic involvement. Some characteristics that have been described include lesions above the waist, presence of bullous and/or necrotic lesions [Figure - 2], older age, absence of tissue eosinophils and presence of immunoglobulin M deposits on skin histology.[7],[8],[9],[10] However, not many studies have been published on this topic and most were limited by small sample sizes. In addition, some of the findings reported are conflicting.

Medical records of patients who presented at the National Skin Centre, the main tertiary dermatological referral center in Singapore, between January 2008 and May 2015 were reviewed. Diagnostic criteria for Henoch–Schönlein purpura were similar to those used in previous studies: (1) palpable purpura or petechiae clinically consistent with Henoch–Schönlein purpura, (2) skin biopsy showing leukocytoclastic vasculitis on histological examination and (3) immunoglobulin A deposition in vessel walls on immunohistochemical examination.[7],[8],[9] Inclusion required all three criteria to be satisfied and an age at diagnosis of ≥18 years. Patients were excluded if they had a known history of malignancy, connective tissue diseases, autoimmune diseases, viral hepatitis, cryoglobulinemia or other hematologic disorders.[8],[9],[11]

Assessment of systemic involvement was also done as in previous studies.[7],[8],[9] Patients were considered to have joint involvement if arthralgia and/or joint swelling were present on clinical history and examination. Gastrointestinal involvement was considered to be present if there was abdominal pain and/or gastrointestinal bleeding during the development of cutaneous lesions. Renal involvement was determined through the detection of microscopic hematuria (red cell casts or >5 red blood cells per high power field) and/or proteinuria (urine protein ≥1+) on microscopic urinalysis. Microscopic hematuria in association with proteinuria of variable range is the earliest and most sensitive sign of nephropathy in Henoch–Schönlein purpura.[12]

Significant renal involvement necessitating nephrology referral was defined as the presence of at least one of the following: (1) new onset hypertension, (2) macroscopic hematuria for ≥5 days, (3) microscopic hematuria for ≥12 months, (4) proteinuria (≥protein 2+ on microscopic urinalysis) for ≥4 weeks, (5) abnormal renal function as indicated by creatinine clearance <60 mL/min, (6) nephrotic syndrome (proteinuria >3.5 g/day and plasma albumin <2.5 g/dL) or (7) acute nephritic syndrome (microscopic or macroscopic hematuria and two other signs including proteinuria, edema, hypertension, oliguria, and raised serum creatinine or urea). Since there are no guidelines available on the indications for nephrology referral in adult Henoch–Schönlein purpura patients, the criteria used were adapted from recommendations for pediatric Henoch–Schönlein purpura.[1],[13],[14],[15],[16],[17]

Chi-square tests or Fisher's exact tests were used to test for the association of each categorical variable with systemic involvement. Wilcoxon rank-sum test was performed to assess the relationship between age and systemic involvement. Multivariate logistic regression models were used to adjust for confounders. Odds ratios and their corresponding 95% confidence intervals were calculated. P < 0.05 was considered statistically significant. Statistics were generated using STATA version 14.0 (STATA Corporation, College Station, TX, USA). 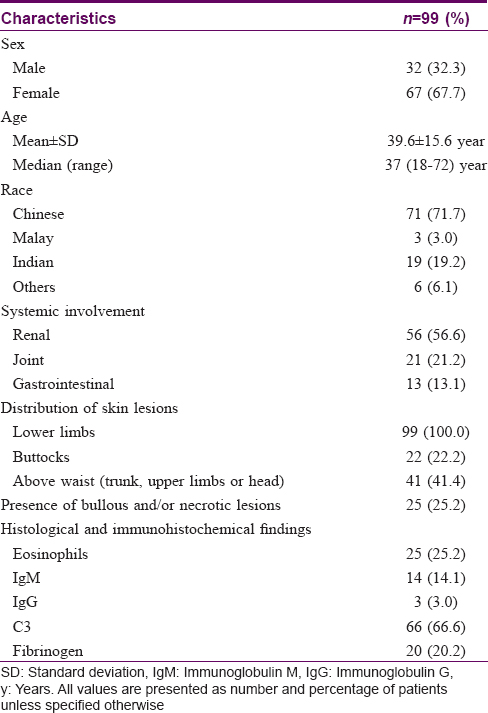 Using bivariate analysis, age at diagnosis was found to be associated with renal involvement (P< 0.01). Multivariate analysis further demonstrated that age > 30 years was an independent predictor of renal involvement with an adjusted odds ratio of 2.97 (95% confidence interval: 1.08–8.16, P = 0.04) [Table - 2]. The occurrences of joint and gastrointestinal involvement were associated with each other (P< 0.01) [Table - 3]. No association was found between systemic involvement and the distribution of cutaneous lesions, presence of bullous and/or necrotic lesions, presence of tissue eosinophils, immunoglobulin M, immunoglobulin G, C3 or fibrinogen on skin histology and immunofluorescence studies [Table - 4]. 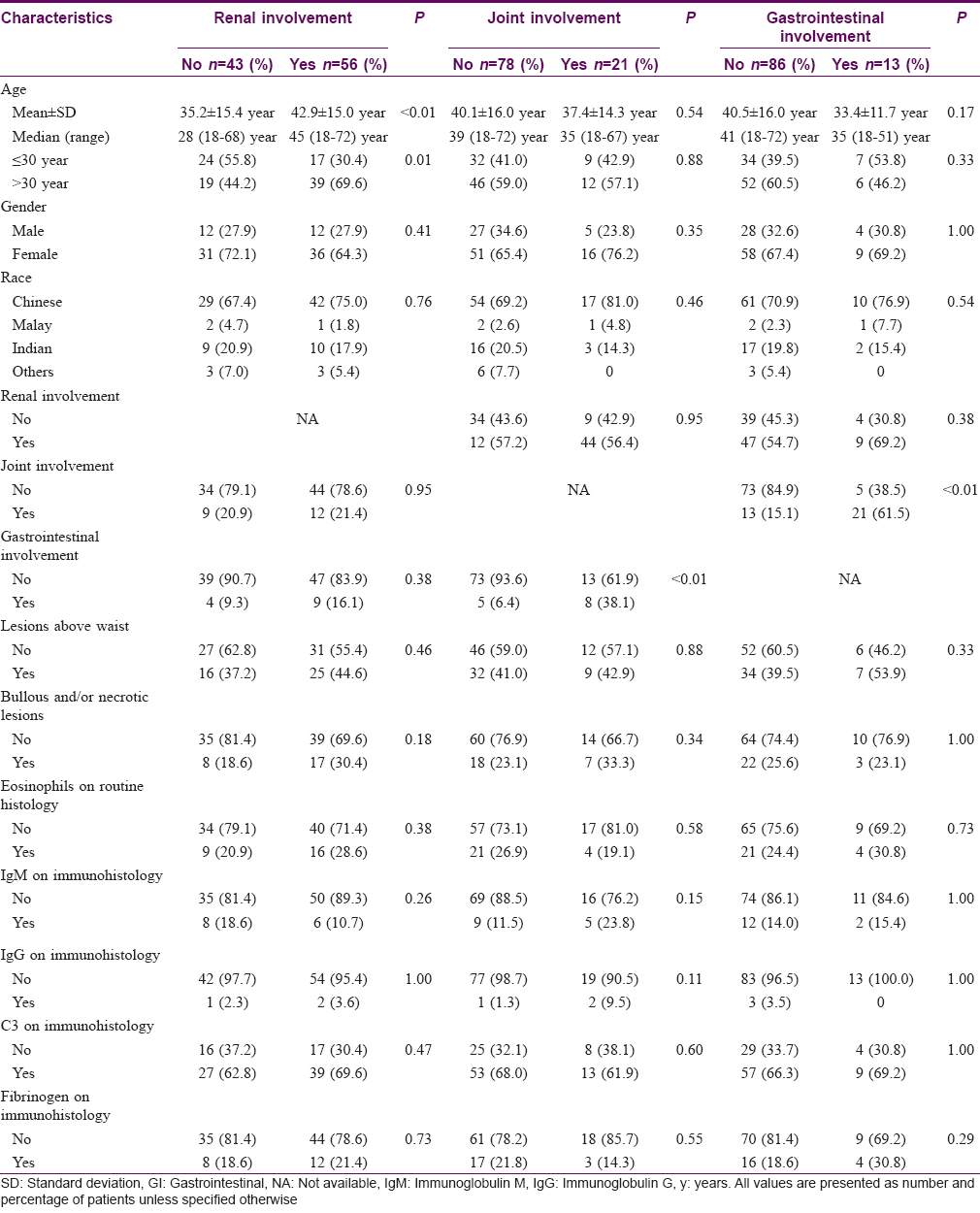 Till now, this study comprises the largest retrospective cohort of adult Henoch–Schönlein purpura patients being studied for systemic manifestations. Our patient demographics were unlike that in another local study which found a preponderance of Malays,[19] though that study too found renal involvement in 56% of patients, a figure similar to that in our study.

In our patients, age >30 years was shown to be an independent predictor of renal involvement with an almost threefold higher risk in this older age group. This is in concurrence with the findings of Poterucha et al. that patients older than 40 years were significantly more likely to have renal involvement, though they did not perform a multivariate analysis.[9] Furthermore, we found that age was also a strong predictor of profound renal involvement that warrants referral to a nephrologist, with an approximately 60% increase in risk with every 10-year increase in age. We did not find any previous study that investigated predictors of nephrology referral in adult Henoch–Schönlein purpura patients. A study on childhood Henoch–Schönlein purpura using similar criteria for nephrology referral however did find that older children were at higher risk of requiring referral (P< 0.01).[14]

Belli and Dervis [10] noted an association between the presence of bullous and/or necrotic lesions and the development of renal and gastrointestinal involvement, which was in contrast to an earlier study by Tancrede-Bohin et al.[20] Our study did not find such an association. However, when we used significant renal involvement necessitating nephrology referral as the outcome, the presence of cutaneous bullae and/or necrosis was found to be a strong independent predictor, conferring an almost six times higher risk.

Renal involvement occurs after a variable period from the onset of Henoch–Schönlein purpura. Current data in adult patients is insufficient to guide the frequency of follow-up to detect renal disease. Among the 56 patients with renal involvement in our study, a large majority (89.3%) developed hematuria and/or proteinuria within 1 month of diagnosis. Therefore, we recommend that adult patients with newly diagnosed Henoch–Schönlein purpura be more closely followed up in the first month.

This study was limited by its retrospective design. Patients were followed up for varying durations and we lacked long-term data to examine how clinical and histopathological characteristics correlated with long-term disease outcomes.

This study analyzed the demographic features, cutaneous and systemic manifestations of 99 adult Asian patients with Henoch–Schönlein purpura. We found that age >30 years at diagnosis conferred a nearly threefold higher risk of renal involvement. The risk of profound renal involvement necessitating nephrology referral rose by approximately 60% with every 10-year increase in age and was almost six times higher if patients had cutaneous bullae and/or necrosis. These findings can serve as a guide to stratify risk in adult patients with Henoch–Schönlein purpura, and those at higher risk can be accorded closer monitoring.