Allergic contact dermatitis due to clotrimazole with cross-reaction to miconazole

A 44-year-old male patient suffering from tinea cruris was prescribed oral fluconazole (200 mg/week) and clotrimazole cream (1%) for twice-daily application. A day after topical clotrimazole application, he developed acute dermatitis over the scrotum and both groins. He had used clotrimazole cream on two occasions in the past for tinea cruris. He did have exacerbation of redness and itching on the second occasion; however, he had not reported it then. In the present instance, suspecting acute allergic contact dermatitis from clotrimazole, it was withdrawn and he continued taking oral fluconazole. His dermatitis resolved 1 week after he was started on oral prednisolone (30 mg/day), oral cetirizine (10 mg/day), and plain water compresses. Patch testing was performed after 3 weeks by Finn chamber method with Indian standard series [1] along with the most commonly prescribed and commercially available topical antifungal preparations in an undiluted form [Table - 1]. Among the above, clotrimazole and miconazole elicited 3 + and 2 + positive patch test reactions, respectively [Figure - 1]. 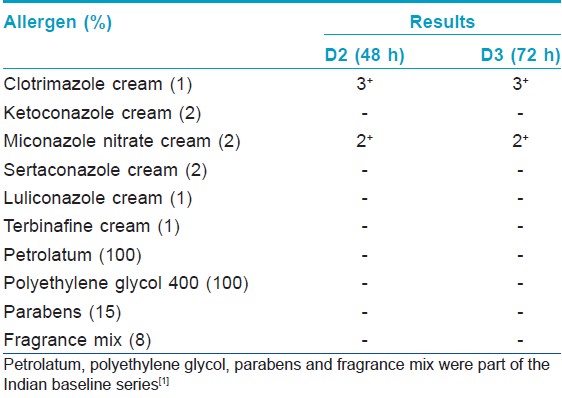