An epidemiological and clinical analysis of cutaneous adverse drug reactions seen in a tertiary hospital in Johor, Malaysia

Background: The prevalence, clinical patterns, and causative drugs of cutaneous adverse drug reactions (cADR) vary among the different populations previously studied. Aim: To determine the prevalence, the clinical patterns of drug eruptions, and the common drugs implicated, particularly in severe cADR such as Stevens-Johnson Syndrome/Toxic epidermal necrolysis (SJS/TEN) and drug rash with eosinophilia and systemic symptoms (DRESS) in our population. Methods: We analyzed the database established for all cADR seen by the department of Dermatology from January 2001 till December 2010. Results: A total of 362 cADR were seen among 42 170 new clinic attendees, yielding an incidence rate of 0.86%. The most common reaction pattern seen was maculopapular eruption (153 cases) followed by SJS/TEN (110 cases) and DRESS (34 cases). Antibiotics was the most commonly implicated drug group (146 cases) followed by anticonvulsants (81 cases) and antigout drugs (50 cases). The most frequently implicated drug was allopurinol (50 cases). Carbamazepine, allopurinol, and cotrimoxazole were the three main causative drugs of SJS/TEN accounting for 21.8%, 20.9%, and 12.7%, respectively, of the 110 cases seen, whereas DRESS was mainly caused by allopurinol (15 cases). Mortality rates for TEN, SJS, and DRESS were 28.6%, 2.2%, and 5.9%, respectively Conclusions: The low rate of cADR with a high proportion of severe reactions observed in this study was probably due to referral bias. Otherwise, the reaction patterns and drugs causing cADR in our population were similar to those seen in other countries. Carbamazepine, allopurinol, and cotrimoxazole were the three main causative drugs of SJS/TEN in our population.
Keywords: Allopurinol, cotrimoxazole, carbamazepine, drug eruptions, drug rash with eosinophilia and systemic symptoms, phenytoin, Stevens-Johnson syndrome, toxic epidermal necrolysis

Cutaneous adverse drug reactions (cADR) are common, comprising 10-30% of all reported adverse drug reactions [1],[2] and its incidence in hospitalized patients is estimated to be 2-3%. [3] The prevalence, patterns of cADR and their causative drugs vary greatly among the different populations previously studied in Europe, Israel, and Asia. [2],[3],[4],[5],[6],[7],[8],[9] Although the majority of cADR are mild and self-limiting, severe cADR (SCAR) such as Stevens-Johnson syndrome (SJS), toxic epidermal necrolysis (TEN), and drug reaction with eosinophilia and systemic symptoms (DRESS) are associated with significant morbidity and mortality. [10]

The objective of this study is to (i) document the rate of cADR in our population, (ii) identify the clinical pattern of drug eruptions and the common drugs implicated, particularly in SCAR such as SJS/TEN and DRESS, and (iii) determine the outcome of patients with SCAR.

The department of Dermatology keeps a registry of all patients with cADR since 2001 and uses mortality rate of SJS/TEN, set at less than 25%, as a yearly measure of the quality of care for patients with SCAR. All suspected cADR referred to our department are evaluated by a dermatologist and only cases with a causality grading of "probable" are registered and reported to our National Drug Monitoring Centre which is the 34 th member of the WHO (World Health Organization) International Drug Monitoring Program. We used criteria developed by the WHO to define causality. A "probable" causal association is considered to be one where there is a reasonable time sequence, the event is unlikely to be attributable to concurrent disease or other medicines and a clinically reasonable response is observed on dechallenge. Rechallenge information is not essential to fulfill this definition. [11] SCARs in this study included only DRESS and SJS/TEN spectrum of cADR.

This study was done by analyzing the database established for this cADR registry from January 2001 till December 2010. Information in this database was gathered from patients′ clinical records and our national adverse drug reaction reporting forms which were either filled in or validated by a dermatologist.

Descriptive analysis was presented. We calculated cADR rate using the reported cases of cADR as numerator and the total number of new patients seen in the department as denominator. Direct comparisons of the cADR rates between different races and age groups were performed using an online two-way contingency table calculator (http://statpages.org/ctab2x2.html). The significance level was set at P<0.05.

Drugs implicated in the various reaction patterns are shown in [Table - 4] and [Table - 5]. Maculopapular eruptions were mainly due to antibiotics (72 of 153 cases, 47.1%) and anticonvulsants (29 cases, 19.0%). Carbamazepine, allopurinol and cotrimoxazole were the three main causative drugs of SJS/TEN [Figure - 2] accounting for 21.8%, 20.9% and 12.7% respectively of the 110 cases seen whereas DRESS was mainly caused by allopurinol (15 cases, 44.1%) and phenytoin (6 cases, 17.6%). Fixed drug eruptions were mainly due to mefenamic acid (7 of 17 cases), tetracyclines (3 cases) and cotrimoxazole (3 cases). Antibiotics were responsible for 9 of the 10 urticarial reactions while NSAIDs accounted for 5 of the 7 angioedema seen. As expected, penicillins (9 out of 15 cases) accounted for the majority of acute generalized exanthematous pustulosis. 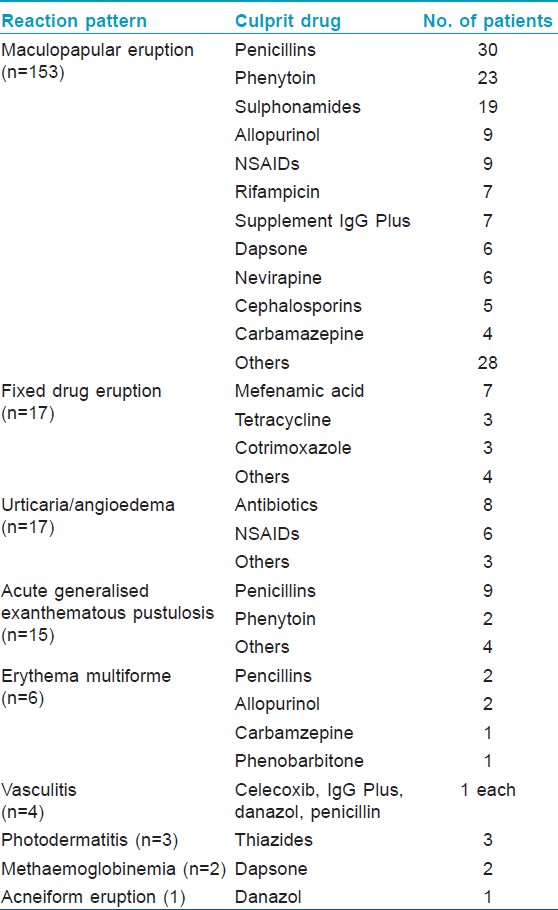 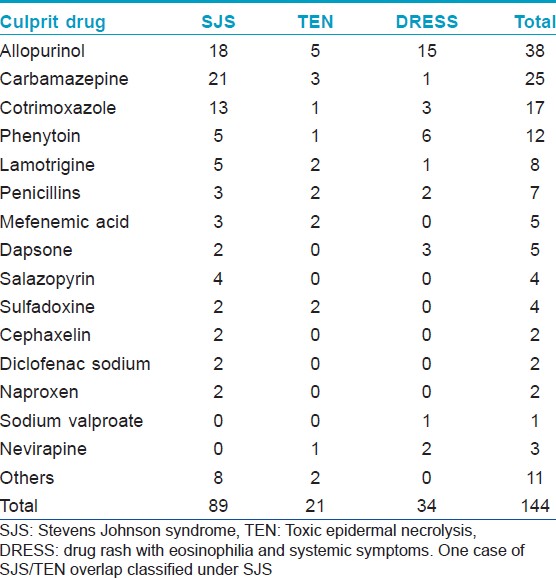 Ten patients succumbed to SCARs, 6 due to TEN [Figure - 2], 2 to SJS and 2 to DRESS. Allopurinol was responsible for 5 of the 10 deaths. Carbamazepine and cotrimoxazole were implicated in one fatality each. Mortality rates for TEN, SJS and DRESS were 28.6 %, 2.2% and 5.9% respectively.

The frequency of cADR in a particular population is influenced by the drug utilization habit, the reaction rates of favorite drugs and pharmacogenetic traits of the population studied. Most epidemiological studies analyzed the occurrence of cADRs in inpatients and revealed a wide variation in the prevalence rate which ranged from 0.36% to 12.2%. [5],[6],[7],[8],[9],[10],[12] A meta-analysis of 39 prospective studies from US hospitals showed that 15.1% of hospitalized patients had cADR. [13] Few studies explored the rate of cADRs seen by a hospital dermatology department; cADRs accounted for 1.38% of all referrals to a university hospital department of dermatology in Denmark and 1.5% of total dermatology consultations seen at a hospital in Tunisia. [8],[14] The lower rate of cADRs (0.86%) seen in our department was probably due to referral bias where only doubtful or serious cADRs were referred to us.

Descriptive analysis comparing the incidence of cADRs by gender without adjusting for the gender distribution of the population from which study samples were drawn showed conflicting results with some studies reporting a female preponderance [2],[3],[7],[8],[12] and others reporting a male preponderance. [4],[5],[6],[9] This study showed a slight male preponderance with a male to female ratio of 1.14:1. However, there was no significant difference between the two gender on the rate of cADR (male: 0.91%, female: 0.81%, P=0.28). The relative risk (RR) of male developing a cADR compared to female was 1.12 {95% confidence interval (CI): 0.91 to 1.38}.

The clinical reaction patterns of cADR and the drugs implicated are similar to an earlier analysis of our clinic cADR registry from 2001 to 2008. [17] Our study confirmed some data already known about cADR: the most common reaction pattern was maculopapular eruptions, antibiotics were the most frequently implicated drug group, maculopapular eruptions were mainly due to antibiotics and carbamazepine was the most common cause of SJS/TEN in Asia due to a high prevalence of HLA-BFNx011502 in this population whereas allopurinol was the most main culprit drug for SJS/TEN in Europe. [2],[3],[4],[5],[6],[7],[8],[9],[12],[13],[14],[16],[17] We continue to see a large number of SCAR namely SJS/TEN (110 cases) and DRESS (34 cases) with 14 new cases of SJS/TEN [Figure - 2] and 15 new cases of DRESS from 2009 to 2010. [16] Carbamazepine, allopurinol, and cotrimoxazole remained the three main causative drugs of SJS/TEN in our population whereas allopurinol and phenytoin were responsible for the majority of DRESS seen.

Allopurinol was the single most commonly implicated drug and the majority of allopurinol-induced cADRs (78% of 50 cases) were SCAR [Table - 6] with five fatalities yielding a mortality rate of 10%. Mortality rate for SJS (2.2%) and TEN (28.6%) was comparable to those reported in literature. [10],[14],[17] We did not have any DRESS-related fatality in our initial report of 19 patients but had 2 deaths out of the 34 cases seen in this study. This observed mortality rate of 5.9% is lower than the rate reported by a Taiwanese study of 30 cases of DRESS with 3 deaths. [18],[19]