An erythematous plaque on the leg of a female

A 43-year-old lady presented for evaluation of a gradually enlarging, mildly painful, non-pruritic, reddish raised scaly lesion of 5-months duration on her right leg. She was a known case of hypothyroidism on treatment and had accompanying high-grade fever and night sweats. She had no history of ulceration, local trauma, joint pains, weight loss, cough with expectoration, sore throat, oral/genital ulcers or photosensitivity. She was previously treated with oral and intravenous antibiotics and oral steroids for presumed cellulitis and erythema nodosum, respectively. Though she experienced transient improvement with corticosteroids, there was no improvement with antibiotics.

Inspection revealed an ill-defined, slightly depressed, annular erythematous plaque, approximately 18 × 16 cm in size, with minimal central hyperpigmentation and peripheral scaling on the medial aspect of the upper right leg [Figure - 1]a and b]. The plaque was warm, slightly tender and firm on palpation. Lymph nodes, liver and spleen were not enlarged. Clinical diagnoses of chronic erythema nodosum and cutaneous lymphoma were considered.

What Is Your Diagnosis?

Histopathology demonstrated deep inflammatory infiltrate, predominantly in the subcutaneous fat [Figure - 2]a and [Figure - 2]b. On higher power, the infiltrate was chiefly composed of atypical lymphoid cells, which were 1–1.5 times larger than a mature lymphocyte with high nuclear: cytoplasmic ratio, indented nuclear margins and coarse chromatin [Figure - 2]c and [Figure - 2]d. There were scattered histiocytes and rare plasma cells. On immunohistochemistry, atypical lymphocytes were positive for CD3 and CD8 [Figure - 3]a and [Figure - 3]b and negative for CD20, CD4 and CD56 [Figure - 4]a, [Figure - 4]b, [Figure - 4]c. Immunohistochemistry highlighted the rimming of individual lipocytes by CD8+ atypical lymphocytes. Features were consistent with subcutaneous panniculitis like T-cell lymphoma (alpha beta type). She was started on prednisolone 60 mg/day. Meanwhile, positron emission tomography scan revealed multiple avid uptakes in the subcutaneous soft tissue (lesion, left leg, neck and chest), abdominal and pelvic lymph nodes and adrenals [Figure - 5]a and [Figure - 5]b. By the time of completion of staging investigations, the patient had developed multiple new erythematous plaques and skin-colored nodules on her neck and upper chest [Figure - 1]c and [Figure - 1]d.

She was subsequently administered cyclophosphamide, hydroxydaunorubicin, vincristine and prednisolone chemotherapy regimen. She attained partial remission after 8 cycles of chemotherapy. Subsequently, she was given local-site radiotherapy, after which she attained complete remission. The plaque resolved leaving behind lipoatrophy [Figure - 6]. She is following regularly with us.

Subcutaneous panniculitis like T-cell lymphoma accounts for less than 1% of all non-Hodgkin's lymphomas.[1] Patients often present with subcutaneous nodules and plaques on extremities and trunk, which usually resolve with lipoatrophy. Systemic symptoms and cytopenias are common. Hemophagolymphohistiocytosis develops in approximately 15–20% of the patients.[2] Bone marrow biopsy was performed and our patient did not have evidence of hemophagolymphohistiocytosis or malignant infiltration of bone marrow. 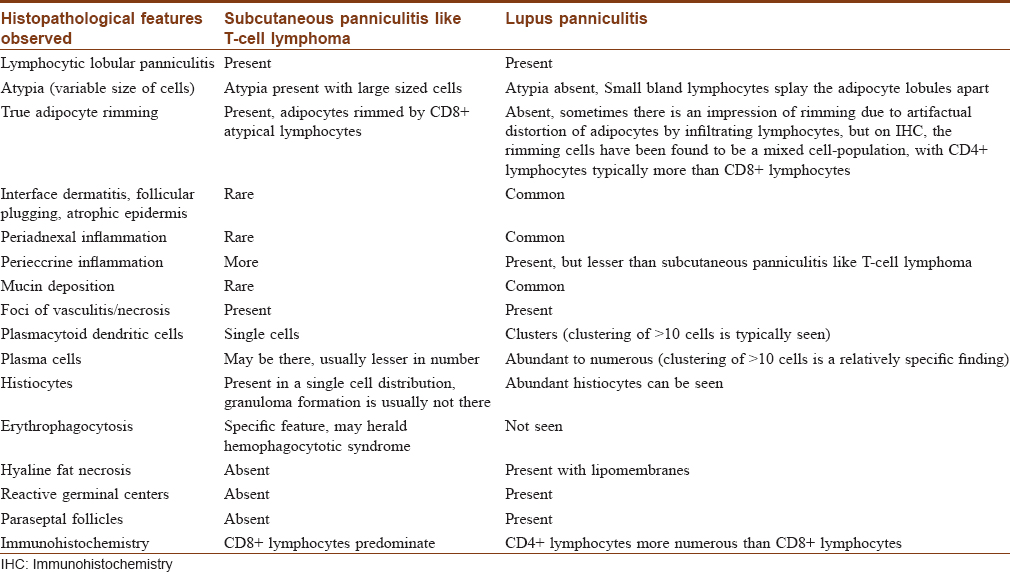 The authors certify that they have obtained all appropriate patient consent forms. In the form, the patient has given her consent for her images and other clinical information to be reported in the journal. The patient understand that name and initials will not be published and due efforts will be made to conceal identity, but anonymity cannot be guaranteed.