BACKGROUND: Onychomycosis is a recalcitrant disease of the nails caused by dermatophytes, yeasts, and molds. AIMS: To compare the clinical efficacy of oral itraconazole pulse therapy and oral terbinafine pulse therapy in onychomycosis. METHODS: A randomized single-blind clinical comparative study was undertaken on 120 patients of onychomycosis during the period March 1999-February 2002. Sixty patients were randomly assigned to receive oral itraconazole 100 mg, two capsules twice daily for seven days a month and the other group of sixty patients received oral terbinafine 250 mg, one tablet twice daily for seven days every month. Four such monthly pulses were administered for each drug. The patients were evaluated at 4-weekly intervals till sixteen weeks and then at 24, 36 and 48 weeks. RESULTS: We observed a clinical cure rate of 82% and mycological cure rate of 90% in the group of patients treated with itraconazole while the group with terbinafine showed clinical and mycological cure rates of 79% and 87% respectively. This difference was not statistically significant. CONCLUSIONS: Both oral itraconazole and terbinafine are effective in the treatment of onychomycosis when administered in the pulse dosage form. Terbinafine is more cost effective while itraconazole has a broader spectrum of antimycotic activity. 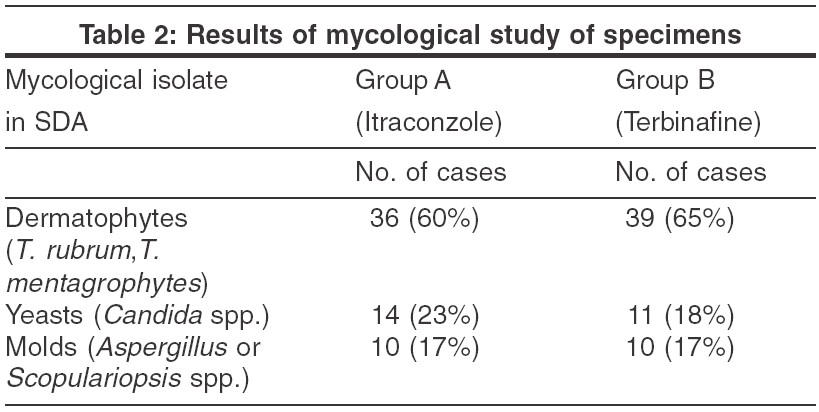 The treatment of onychomycosis is far from satisfactory due to several factors like poor cure rate of conventional antifungals, longer duration of therapy, high cost of therapy and the inherent slow growth of the nail plate requiring a longer time (about one year) to see observable effects of successful treatment.[8] However, the advent of itraconazole and terbinafine has revolutionized the therapy of onychomycosis because these drugs have high clinical and mycological cure rates by virtue of their ability to easily penetrate into the nail apparatus and persist there for many months after stopping therapy. Their effectiveness in the treatment of onychomycosis is now well-established.[9],[10],[11],[12],[13],[14],[15],[16],[17],[18] A major limitation to their widespread use is their high cost and consequently different therapeutic schedules have been used to minimize the cost without affecting the efficacy. The use of pulse therapy instead of daily administration is one such innovation that has shown encouraging results in the case of itraconazole. Terbinafine is conventionally given in daily doses for 6-12 weeks. Since it also persists in the nail apparatus for long durations even after stopping therapy, pulse therapy is a viable option as shown by different studies.[13] Our study compares the clinical efficacy of itraconazole pulse therapy with terbinafine pulse therapy in the treatment of onychomycosis.

This randomized, single-blind, longitudinal, clinical comparative study was undertaken in the Department of Skin and Venereal Diseases, S. C. B. Medical College, Cuttack, in collaboration with the Department of Microbiology, during the period March 1999-February 2002.

All patients presenting to the dermatology O.P.D. with clinical features of fingernail or toenail onychomycosis (e.g. discoloration, thinning, crumbling or destruction of the nail plate; subungual debris; or onycholysis) were subjected to direct microscopical examination of nail material under potassium hydroxide (KOH) examination and culture in Sabouraud′s Dextrose agar (SDA). Patients with nail abnormalities due to associated skin disease or any systemic diseases like psoriasis, lichen planus, contact dermatitis, congenital nail dystrophy, malnutrition, iron deficiency, etc. were excluded from the study. We came across 645 patents clinically suggestive of onychomycosis during the period of two years. The patients were clearly explained about the nature of the study and a written consent was taken for their participation in the study. A baseline liver function test was done in all of them and those with hepatic dysfunction in the form of jaundice and/or elevated hepatic enzymes more than twice the normal values were excluded from the study. Other criteria for exclusion were pregnancy, lactation, concomitant therapy with drugs having a possible interaction with itraconazole, age< 15 years or> 60 years, and mycologically negative cases (both negative for KOH examination and culture on Sabouraud′s dextrose agar (SDA)). A total of 120 patients satisfied the above criteria and agreed to participate in the study. They were in the 15-60 year age group (72 males and 48 females) and were recruited into the study.

All patients were assigned individual identification numbers and were divided randomly and equally into two groups (A and B) using a table of random numbers. Thus, two groups of 60 patients each with 36 men and 24 women in the age group 15-60 were created. Group A received oral itraconazole 200 mg (two capsules of Cap. Sporanoxγ 100 mg) twice daily for seven consecutive days every month while Group B received oral terbinafine 250 mg {Tab. Sebifinγ 250mg} twice daily for seven consecutive days every month. The total duration of treatment for both groups was 4 months. The cost of therapy was borne by the patients. The drugs were bought by the physician and dispensed to the patients in unmarked packets containing the entire dosage for seven days every month for four months.

The patients were evaluated at the start of the therapy and thereafter at 4-week (or monthly) intervals for 4 months, followed by evaluation at weeks 24, 36, and 48. During these visits, they were assessed for growth of a normal and healthy appearing nail plate and asked for any adverse effects of the drugs. In addition, microscopic examination of nail material under KOH examination and culture of nail material in SDA was done at 16 weeks and 48 weeks. A liver function test was done twice for all patients at 6-month intervals from the start of therapy.

Clinical cure was defined as replacement of greater than 70% of the mycotic nail bed and plate by normal and healthy appearing nail bed and plate, while any growth less than this was considered as treatment failure. Mycological cure was defined as negative microscopy under KOH examination and a negative culture in SDA at the end of the follow up period. At the end of the study, the results were compiled, tabulated and analyzed using suitable statistical tools like percentages and chi-square tests. [Table - 1]

Microbiological study of the nail material by culture in SDA with chloramphenicol showed growth of dermatophytes, molds and yeasts. The commonest isolates in culture were dermatophytes, i.e. Trichophyton rubrum and Trichophyton mentagrophytes, seen in 60% and 65% of isolates in Groups A and B respectively. Yeasts ( Candida spp.) were seen in 23% of Group A and 18% of Group B isolates. Molds like aspergillus and scopulariopsis were observed in 17% of isolates of both Group A and Group B. [Table - 2]

Adverse effects were seen in 9 (18%) patients on itraconazole (gastric upset, 4; taste disturbance, 3; headache, 1; and jaundice, 1) and in 11 (22%) in the terbinafine group (gastric upset, 5; headache, 2; maculopapular rash, 2; and altered taste, 2). None of these effects was significant enough to discontinue therapy except in one patient on itraconazole who developed jaundice in the middle of the third pulse. In this patient itraconazole was discontinued and other hepato-protective agents were given in consultation with the gastroenterology department. There was complete clearance of hyperbilirubinemia within a month and the hepatic enzymes reached normal levels at the end of another month. During the subsequent follow-ups the patient was perfectly healthy without any sequelae.

Successful treatment of onychomycosis has been a challenge for dermatologists. Traditional agents like griseofulvin have a narrow spectrum, require a longer duration of therapy, and have a high relapse rate.[18],[21] Ketoconazole, although much more effective,[20],[21] carries risk of hepatotoxicity, that limits its widespread use. The agents most commonly used for the treatment of onychomycosis are fluconazole, itraconazole and terbinafine. These newer anti-fungal agents have better pharmacokinetic profiles, like prompt penetration of the nail and nail bed, persistence in the nail for months even after stopping therapy, and fewer adverse reactions.[9],[10],[14]

Itraconazole is a highly lipophilic triazole antimycotic. It has a spectrum of action against dermatophytes, yeasts, molds, dimorphic and dematiaceous fungi. It acts by inhibiting the enzyme 14-demethylase, a microsomal cytochrome P-450 enzyme in the fungal membrane (thus blocking the conversion of lanosterol to ergosterol, which is an important constituent of fungal cell membrane) leading to arrest of fungal growth. It reaches the distal end of the nail within two weeks of starting therapy and persists in the nail plate for 9-12 months. It is equally effective for the treatment of onychomycosis in the form of daily therapy as well as pulse therapy.

Terbinafine belongs to a newer family of antifungals, the allylamines. It acts by inhibiting the enzyme squalene epoxidase, blocking the biosynthesis of ergosterol. It is primarily effective against dermatophytes, and is less effective against yeasts, molds, and dimorphic fungi. Terbinafine reaches the nail plate by diffusion from both the matrix and the nail bed. It has been detected in the nail plate for 30-36 weeks after stopping therapy. Although conventionally given in a daily dose, pulse therapy with terbinafine for the treatment of onychomycosis is a viable option .Our study shows that pulse therapy with terbinafine 250 mg twice daily for 7 days a month is comparable to itraconazole pulse therapy of 200 mg twice daily and is significantly more cost effective for the treatment of onychomycosis. Both the agents achieved similar cure rates for dermatophytes, but itraconazole was more effective in nail infections caused by molds and candida. Both the agents were relatively free of major adverse effects when administered in the pulse dosage.