Analysis of submissions, editorial and peer-review process, and outcome of manuscripts submitted to the Indian Journal of Dermatology Venereology and Leprology over a 6-month period

Background: Despite an interest in the editorial process at biomedical journals, not much information is available on this topic.
Aims: To study the characteristics of the submissions to the Indian Journal of Dermatology Venereology and Leprology (IJDVL) and analyze the editorial and peer-review process and factors influencing the final outcome.
Methods: Retrospective review of the manuscripts submitted to the IJDVL from January 1, 2016, to June 30, 2016.
Results: The IJDVL received 639 manuscripts during the study period, most being Case reports (35%), Research articles (30%), and Letters to editor (20%). The proportion of submissions from Indian (53%) and foreign (47%) authors was comparable. About 55% (n = 353/639) of the submissions were editorially rejected. Some of the common reasons for editorial rejection included “sub-optimal images,” “no novelty,” “incomplete information or results,” and “incorrect diagnosis or interpretation of results.” The acceptance rate during this period was 19%. The median number of days to reach the final decision was 14 days for editorial rejection, 146 days for acceptance, and 85 days for rejection after external peer-review. The acceptance rates were higher for submissions from Indian authors [odds ratio (OR) 1.96], those submitted as Letters (OR 2.06), or in the area of tropical infections (OR 2.17). Submissions as research articles (expB = 1.23), those from Indian authors (expB = 1.15), final decision being acceptance (expB = 1.56), and those requiring preliminary author revisions (expB = 3.34), external re-reviews (expB = 2.22), and repeated author re-revisions (expB = 2.34) were associated with longer times to reach final decision.
Limitations: A relatively short study period of 6 months.
Conclusion: The IJDVL attracts submissions both from India and abroad. Articles submitted in the Letters category or related to tropical infections were most likely to be accepted. There is scope for improving the time taken for editorial processing of manuscripts.

There is an interest in the editorial processes undertaken at biomedical journals. Potential authors and some readers may wish to know how editorial decisions are taken and the usual timelines for this process. However, not much information is available in this regard. Previously, an overview of the editorial workflow in the Indian Journal of Dermatology Venereology and Leprology (IJDVL) has been published.[1] We have now looked at all submissions received by the journal over a 6-month period to provide a detailed picture of various characteristics of submissions, editorial decision-making, and timelines.

We reviewed the following data for the manuscripts submitted to the IJDVL from January 1, 2016, to June 30, 2016: place of submission, type of submitting institute, category, and subject area of submission. The number of days a submission spent in each phase of editorial cycle (triage and primary screening, external peer-review, and secondary screening) and the time to communicate the editorial decision to the author (including the time taken for first response from the journal) were recorded. For manuscripts entering the external peer-review phase, the number of invited reviewers per manuscript, the number of reviewers who responded, their recommendation (accept, accept with revision, reassess, reject), and discordance between reviewer recommendations were noted. The number of manuscripts needing more than one round of external review and revision as well as the number of re-reviews and re-revisions were noted. The final editorial decision for every manuscript and the time to reach the final decision were noted. The reasons for preliminary author revisions before external peer-review, editorial rejection, and final rejection were tabulated. For accepted manuscripts, the article category at the time of acceptance and any change in the category from the time of submission were recorded. The time to publish an accepted manuscript online and in print was also noted. The number of manuscripts which were withdrawn from the editorial cycle and the reasons thereof were listed. 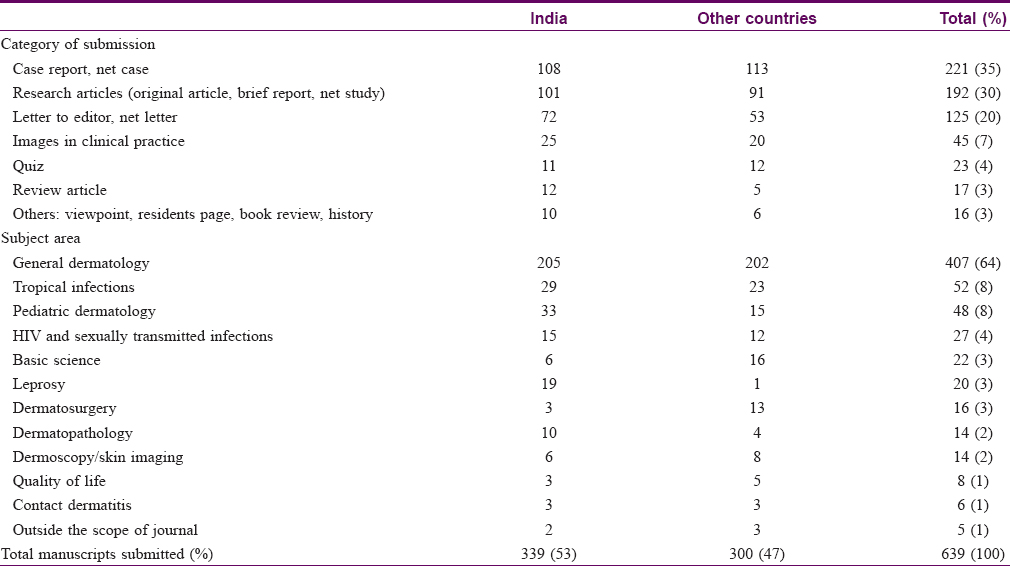 Table 1: Category and subject-wise distributions of submissions from India and other countries

All submitted manuscripts were screened by a set of 10 team members, all qualified dermatologists. Following this, the manuscripts were assessed by the editor-in-chief and the associate editors. 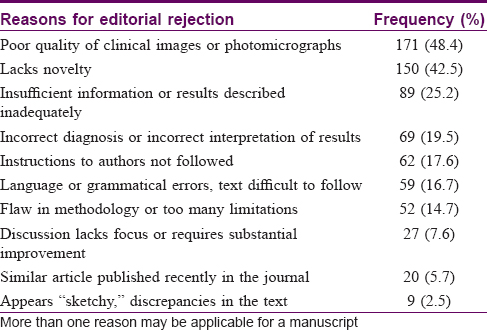 About 45% (n = 293/639) of submissions were assigned to the Section Editors for further processing. Of these, 227 (77%) manuscripts were deemed to require preliminary author revisions before further processing. These revisions fell into three large groups: those related to author instructions, those requiring a change in the category in which the manuscript had been submitted, and those related to the content of the article [Table - 3]. Quite frequently (81.5%, n = 185/227), more than one type of problem was identified in a manuscript. Most manuscripts (70%, n = 159/227) could be processed after one author revision, but others required further revisions because all the editorial queries were not addressed in the first instance (mean number of preliminary author revisions before further processing 1.52 ± 0.98, median 1, range 1–6). 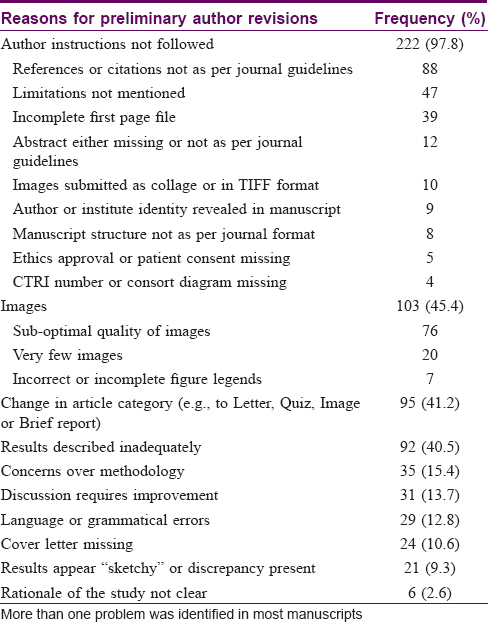 About a third (36%, n = 230/639) of submissions were sent for external peer-review. Most (59%, n = 136/230) of the manuscripts were sent to 2–3 reviewers, while 8 (4%) were sent to a single reviewer and 86 (37%) to more than 3 reviewers (range 4–14 reviewers). This number includes reviewers for first cycle of peer-review as well as any additional reviewers invited for subsequent peer-reviews. No reviewer could be found for one manuscript submitted on a basic science topic, which was ultimately withdrawn from the editorial cycle. The median reviewer response rate was 67%, that is, two out of three reviewers responded per manuscript. In about a quarter (24%, n = 56/230) of manuscripts, comments were received from only one reviewer. Of the manuscripts where >2 reviewer comments were available, 59% (n = 102/173) had discordance between the reviewers' recommendation.

Following peer-review, a final decision could be taken for 66 (29%) manuscripts, almost all (97%, n = 64/66) being rejections. The other 163 (71%) manuscripts were sent to the authors for revision in the light of referee comments.

Following the final author re-revisions (n = 80), a final decision could be reached in 72 manuscripts: 63 were accepted and 9 were rejected. 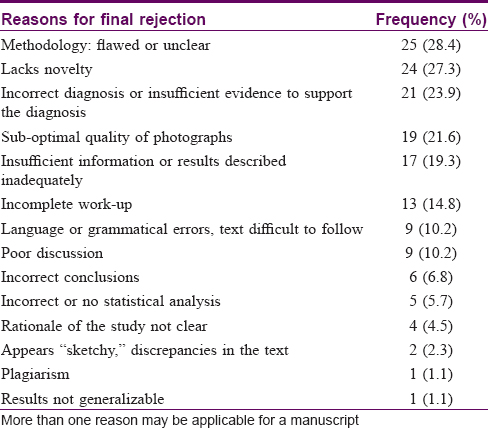 Publication: Online and in print 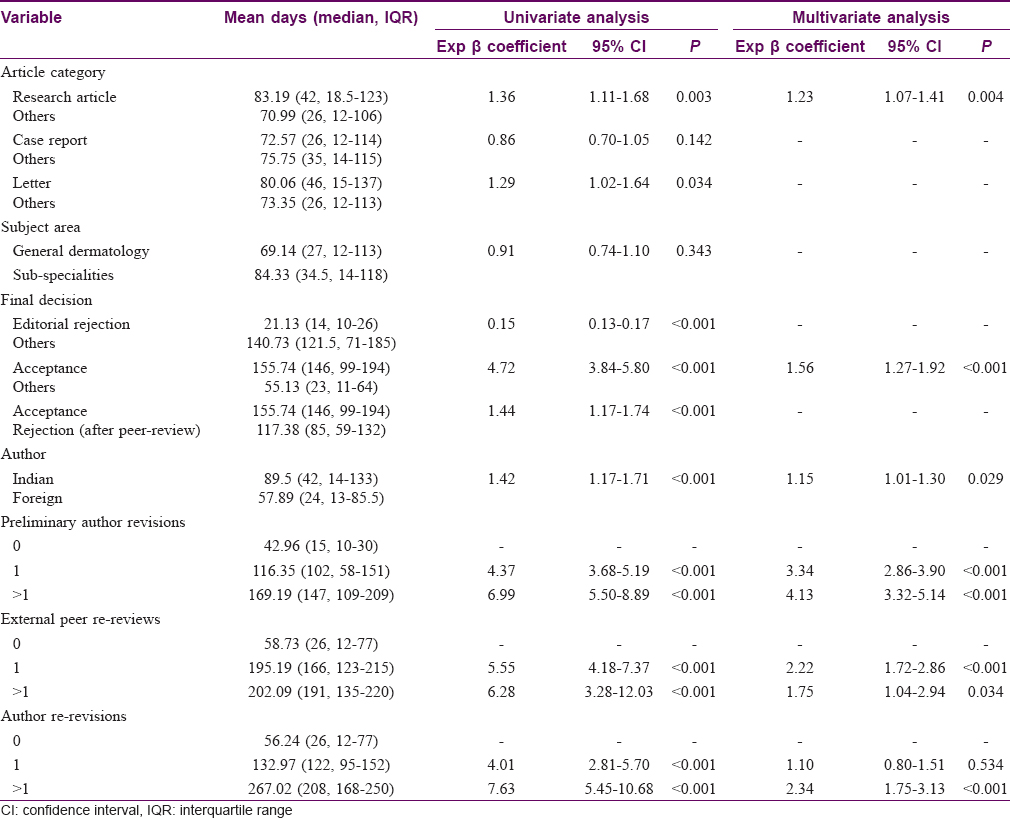 The IJDVL received articles from both Indian and international authors in comparable numbers. The majority of the submissions were from academic institutions. Case reports, Research articles, and Letters formed the bulk (85%) of submissions. The journal's acceptance rate during this period was 19%, which compares favorably with most other dermatology journals. Most rejections occurred during the initial in-house triage process (80%) or after the first round of peer-review (an additional 18%). However, once the manuscript passes this stage, the chances of acceptance increase and continue to increase as it makes its way further into the editorial cycle: twenty percent (n = 33/163) were accepted after first author revision, twenty eight percent (n = 21/74) after external re-reviews, and seventy nine percent (n = 63/80) after author re-revisions.

The acceptance rate for submissions from Indian authors was higher than from foreign authors, probably reflecting the quality of articles the journal attracts from Indian authors. Apart from reasons such as a lack of novelty, incomplete or incorrect results, and flawed methodology,[2],[3] sub-optimal quality of submitted images emerged as an important reason for editorial rejection. As dermatology is largely a visual science, the quality of image is often one of the deciding factors. The journal is making every effort to improve the quality of published photographs: there are three dedicated image editors who carefully scrutinize the submitted images and even suggest ways to the authors on how to improve them. An editorial discussing some common pitfalls of clinical photography has been published previously.[4]

Of the manuscripts which were not rejected straight away, a large majority (77%) were sent back to the authors for preliminary revisions before further processing. The most common reasons for this were not following author instructions correctly, followed by sub-optimal quality of images. A change in article category, usually conversion to a shorter format, was requested in about 41% of manuscripts before acceptance, mostly for Case Reports and Original articles. Like most other journals, IJDVL is also consciously shifting away from Case reports, with only well worked-up novel cases or case series which can potentially impact the clinical practice being considered for this format.

The median editorial rejection time of the IJDVL was 14 days, a bit longer than what one might expect. However unlike most other journals, IJDVL provides fairly detailed and specific feedback for manuscripts that are editorially rejected. This slows the triage process, but it is likely that authors appreciate the effort made to explain the editorial decision and suggestions for improving the manuscript. Although there are no accepted standard editorial turnover times, it has been suggested that the results of a peer-review should be available in 1–2 months for research articles and review papers, and the authors are expected to submit the revision within a month. For Letters to editor and Commentaries, the suggested time to reach a final decision is 2 weeks. 5 The journal has some way to go to meet these benchmarks, and a part of the reason may be that the entire editorial team works on a purely voluntary basis and nearly all members are clinical dermatologists, with additional academic and other responsibilities. Some measures are being considered and implemented to improve the editorial workflow. A recently implemented change was assigning an editorial team member the task of keeping manuscripts moving rather than depending on system-generated reminders. In addition, there is an attempt to reduce the number of manuscripts sent back to referees for re-review. Currently, this figure stands at 45% (n = 74/163). Reserving re-reviews only for those articles where outside expertise is imperative is likely to speed-up the workflow. There is a clear need for the IJDVL to improve its manuscript processing time. One of the major challenges is finding reviewers who can provide constructive criticism in a timely manner. On an average, about a third of the reviewers did not respond, which often necessitated sending the manuscript to additional reviewer (s). Other problems included too much time taken by the reviewers and unsatisfactory quality of reviewers' comments (sometimes just one word!). Holding workshops for reviewers may improve the external peer-review process.[6] Sending the manuscripts back to the authors for revisions repeatedly also led to a delay in the final decision. One of the main reasons behind this was the failure of the authors to address all queries at one go. A continuous process of self-appraisal followed by improvements in workflow will serve the journal well in its goal of meeting the expectations of IADVL and the larger bio-medical community.

This study was limited to IJDVL over a 6-month period. A study covering a longer period and comparison of data with other journals of dermatology could have given us better insight.

The authors would like to acknowledge Ms. Alexy Babu for her assistance in gathering the data for statistical analysis.