We report a young male with anaplastic large cell lymphoma who presented with progressive hyperpigmentation of skin.

A 29-year-old male patient attended the Department of Dermatology of Government Medical College, Kozhikode with diffuse hyperpigmentation and intractable pruritus (that did not respond to antihistamines, emollients and topical steroids) of 2 years' duration and significant weight loss for 6 months. No exacerbating factors or diurnal variation were observed for pruritus which involved his entire body. He was not on any medication prior to the onset of hyperpigmentation.

Biopsy from the hyperpigmented skin of upper arm showed increased pigmentation of basal layer of epidermis without any pigment incontinence [Figure - 3]a. Prussian blue staining failed to detect hemosiderin deposition.

Computerized tomogram-guided biopsy from the mediastinal lymph node showed a neoplasm with atypical lymphocytes, multinucleated giant cells with wreath-like nuclei, and mixed inflammatory infiltrate composed of eosinophils and neutrophils [Figure - 3]b. Immunohistochemistry found the cells to be positive for CD3, CD30 [Figure - 4]a, and epithelial membrane antigen (EMA) and negative for CD20, CD15, anaplastic lymphoma kinase [Figure - 4]b, and paired box (PAX) 5 [Figure - 4]c confirming the diagnosis as anaplastic large cell non-Hodgkins lymphoma- stage 2B as per Ann Arbor staging system (International prognostic index score was 1) with generalized hyperpigmentation and pruritus as a paraneoplastic phenomenon.[2] Presently, 2 months after completion of chemotherapy with cyclophosphamide, doxorubicin, vincristine, and prednisolone, the patient has attained complete resolution of neoplasm and pruritus, marked improvement in cutaneous hyperpigmentation and has gained weight [Figure - 1]b.

Though the common age at diagnosis for anaplastic lymphoma kinase negative anaplastic large cell lymphoma is 40–65 years, it is occasionally reported in young individuals (as our patient).[3]

Relatively earlier stage of the disease (stage IIB) and a low international prognostic index score of 1 detected at the time of diagnosis could be a reflection of the cutaneous symptoms prompting the patient to seek early medical aid.[3]

We have come across only one other instance of anaplastic lymphoma kinase negative anaplastic large cell lymphoma manifesting with diffuse cutaneous hyperpigmentation in the literature where histology revealed hemosiderin deposition in macrophages [Table - 1].[1],[5],[6],[7],[8] The absence of the same along with the increased basal cell pigmentation observed in the skin biopsy of our patient denotes a role for melanocyte stimulating substances secreted by the tumor cells. 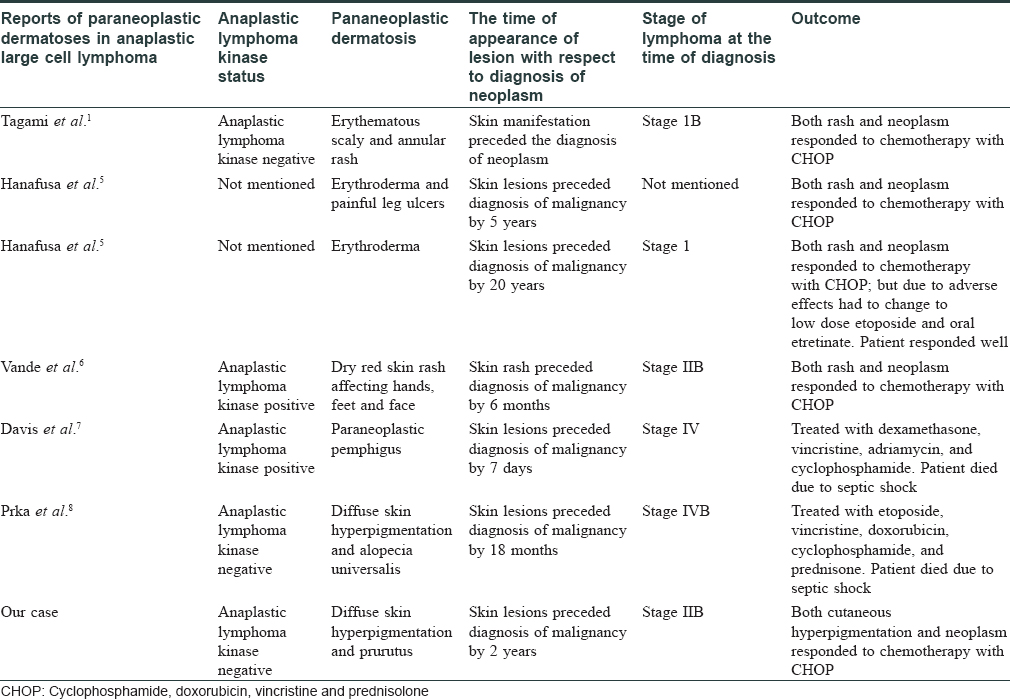 We report this case to highlight a rare presentation of anaplastic large cell lymphoma manifesting with diffuse cutaneous hyperpigmentation and pruritus which suggests that the combination of these symptoms should raise the suspicion of an underlying malignancy.

We are grateful to Dr. Neena Mampilli, Pathologist, Baby Memorial Hospital, Kozhikode for the invaluable help in carrying out the immunohistochemistry analysis.