A 26-year-old female, born of a non-consanguineous marriage, presented to the dermatology outpatient of Vardhaman Mahavir Medical College and Safdarjung Hospital, New Delhi, India, with a history of generalized recurrent blistering since birth. She had begun to develop hyperkeratotic plaques all over the body since early infancy and by 8 years of age, the lesions had cleared from most areas and had localized to the flexures (neck, cubital fossae, elbows, and wrist) [Figure - 1]a. For the past 3 years, she was also developing recurrent episodes of erythematous annular plaques with scaling over the trunk, thighs, and inframammary areas. These lesions increased in size over a period of 8-10 days and later developed peripheral desquamation giving them an annular appearance [Figure - 2]a and b. She had given birth to a boy with erythroderma with subsequent development of rippled hyperkeratosis of the flexures [Figure - 3]a and b. There was no history of neonatal blistering in the child. Examination of the child revealed polycyclic, psoriasiform, scaly plaques on the trunk and extremities. Clinically, the hair, teeth, and nails were normal. With the provisional differential diagnoses of bullous congenital ichthyosiform erythroderma (BCIE) occurring alone, in combination with erythrokeratoderma, or in combination with with psoriasis, a skin biopsy was taken from the annular plaque and a hyperkeratotic lesion that represented the two main clinical aspects of the disease. Light microscopy of the specimens revealed hyperkeratosis, acanthosis, and degeneration of granular layer with dispersion of keratohyalin granules. Vacuolar changes were evident in the keratinocytes of the stratum spinosum [Figure - 4]. These findings were consistent with the diagnosis of epidermolytic hyperkeratosis. A complete blood count, liver and kidney function tests, and serum electrolytes were normal. Skin scrapings from the scaly plaques were negative for fungi.

She was initially started on emollients and ciclosporin 3.5 mg/kg body weight because of the presumptive differential diagnosis of psoriasis for the annular plaques. Retinoids were not considered at this point because she was breastfeeding. The erythematous, annular plaques improved moderately after 6 weeks of treatment. The plaques remained stable for 1 month after which she had a flare of the annular plaques. She was then started on acitretin 0.5 mg/kg/day after detailed counselling regarding contraception. Four weeks later, all the annular plaques disappeared and there was a remarkable improvement in the flexural as well as the annular plaques [Figure - 1]b. No recurrence was noted after 2 months. We plan to re-institute acitretin in the event of a relapse. The child was treated with emollients in view of the milder phenotype and the potential side effect profile of acitretin.

The distinct phenotype seen in our patient has only been described in eight families thus far in the literature and we were unable to find any previous cases reported from India [Table - 1]. It was first reported in a young female by Sahn et al. in 1992 who also coined the term annular epidermolytic ichthyosis. [1] She had bullous and ichthyosiform skin lesions since the age of 8 months. Later, she developed numerous annular and polycyclic, erythematous, hyperkeratotic plaques on the trunk and extremities, which were pruritic, enlarged slowly, and then resolved. Histopathology of the annular plaques revealed epidermolytic hyperkeratosis. Our case also had a similar presentation. Subsequently, Joh et al. reported a similar condition in a family with two generations being affected. Histological examination showed typical features of epidermolytic hyperkeratosis and molecular analysis revealed a novel dinucleotide mutation within the 2B segment of the keratin 10 gene that was passed on to offspring. [2] Similar cases were reported by Suga et al. in 1998 [3] and Sybert et al. in 1999. [4] Molecular analysis of these families revealed mutations in keratin 10 and keratin 1 genes, respectively. Naik reported episodic flares of polycyclic psoriasiform patches in a young woman with a life-long history of palmoplantar keratoderma with histological features of epidermolytic hyperkeratosis. [5] 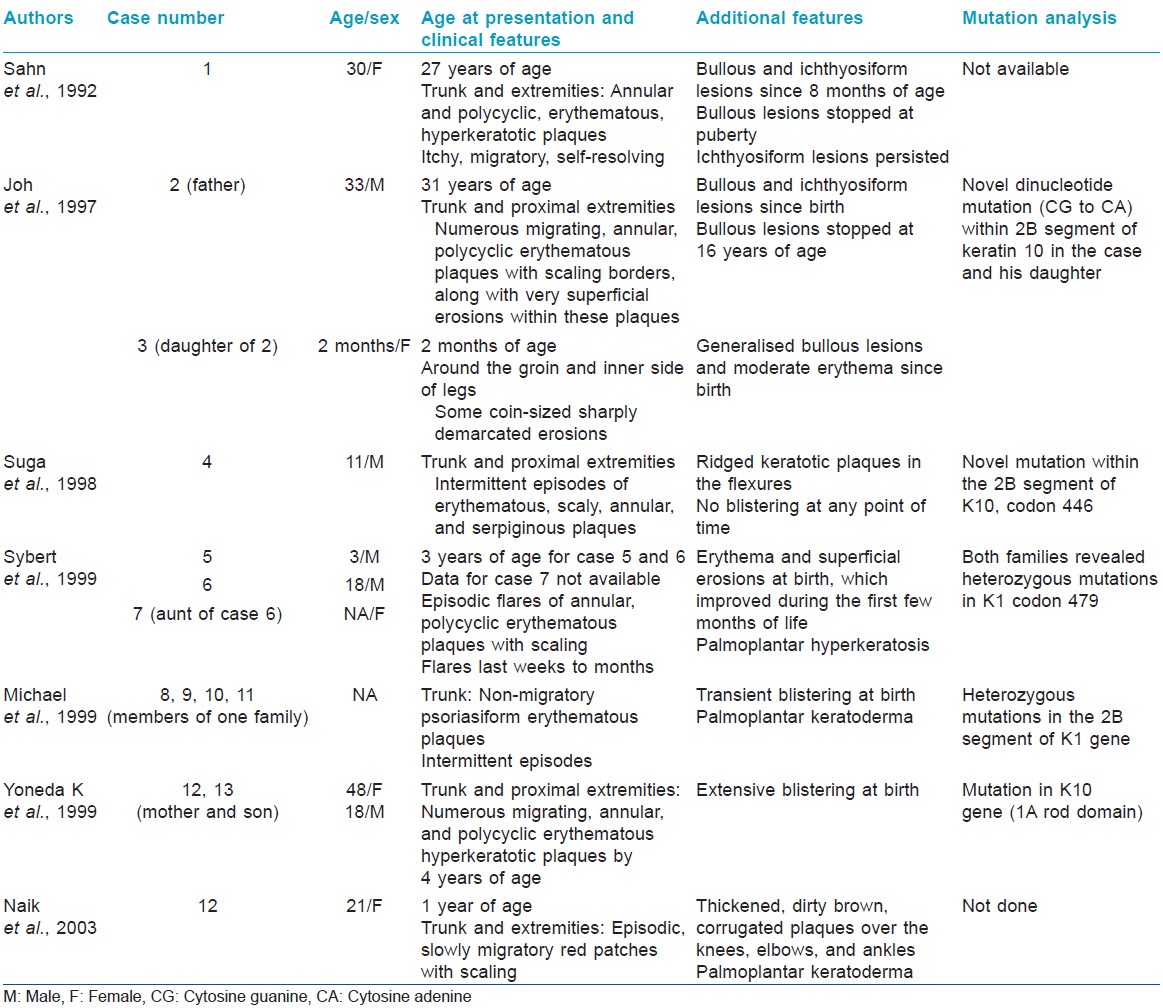 The molecular mechanisms underlying this particular phenotype of epidermolytic ichthyosis caused by mutations in K1 and K10 are unclear. We were not able to perform the mutation analysis in our patient because the facility was not available in our setting.