Transverse nasal groove (TNG) was first described in 1951 by Cornbleet, as a minor cutaneous defect and has been referred to as transverse nasal strip, stria nasi transversa and transverse nasal line. [1],[2] They are well-demarcated grooves of 1-3-mm width and about 1-mm depth that extends transversely across the dorsum of nose, at the junction of upper two-third and lower one-third of the nose, just proximal to alae nasi. [3] They are more prominent in children and tend to improve spontaneously overtime during third and fourth decade of life and becomes less apparent and shallower; [3] finally by the end of fifth decade only a faint band of pigment may remain. [4] TNG seems to be more common than indicated, but because of its asymptomatic nature, only a few case reports have been published. [2],[3],[4],[5],[6] Sometimes the affected individuals may develop large patulous follicles, severe acne and scales within the groove. [4]

With increased aesthetic awareness among the general population, it is not infrequent that a dermatologist gets a patient with this concern. In addition to the classical description of this entity, we came across variations in its presentation which was not described in literature. Hence, we took up this study to appraise our knowledge regarding this interesting entity and its association with other dermatoses.

We conducted this prospective clinicoepidemiological observational study between January 2010 and May 2011 at our rural tertiary care center after ethical board approval. All patients attending the dermatology outpatient department were observed and screened for well-demarcated lesions present transversely across the nasal bridge proximal to alae nasi. Detailed pertinent history with respect to the onset, progression of the lesion, any associated dermatosis on the lesion or elsewhere, any treatment taken for the same was noted and thorough clinical examination was done. Duration of lesion and family history were given special emphasis. Signs of any disease or other dermatoses, if any, were noted and patient was evaluated and treated for the dermatosis, for which he/she had actually visited the dermatology clinic.

Transverse nasal lesions were closely observed and various morphological patterns were noted and classified as groove, line, strip or ridge [Table - 1]. Histopathological examination was not performed due to aesthetic concerns. 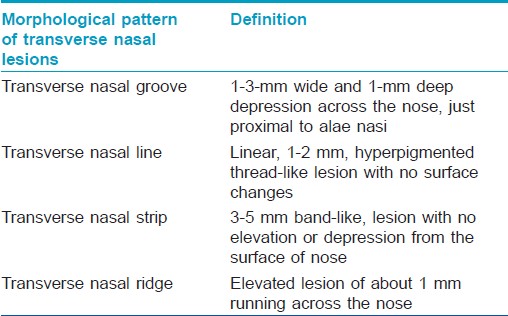 During January 2010 to May 2011, 30552 cases were screened. A total of 100 consecutive patients with transverse nasal skin lesions were recruited in the study after informed consent (incidence 0.33%). TNG was found to be more common in females (80%). Study subjects were divided into five age groups and majority belonged to 15-30 years age group (42%), followed by 30-45 years (28%). Only one case presented in the age group of 60-75 years. Fifteen patients (15%) had family members with similar condition.

Majority of patients presented with classical TNG (39%) [Figure - 1]. An equal number of cases presented as transverse nasal line (28%) [Figure - 2] and transverse nasal strip (28%) [Figure - 3]. Four patients (4%) presented with transverse nasal ridge. The ridge was smooth in all patients but one, who had a beaded appearance [Figure - 4]. The beaded appearance was due to presence of patulous open comedones over the ridge. Lastly, in one case [Table - 2], in addition to the classical transverse nasal grove, we observed a loop-like groove which had its origin and end point in the nasolabial fold with its apex over the dorsal nasal bridge; thus forming a triangular area between the two grooves [Figure - 5]. Various other dermatological conditions observed in these patients were seborrheic diathesis, dermatosis papulosa nigra, seborrheic keratosis, ichthyosis, atopic dermatitis, acne vulgaris, milia and psoriasis [Table - 3]. Patients with seborrheic diathesis included those having seborrhea or seborrheic dermatitis or dandruff. 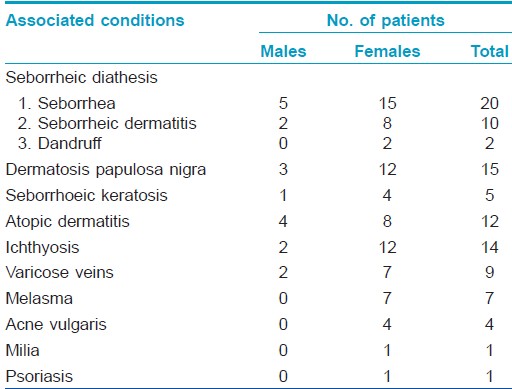 TNG is rare cutaneous disorder, for which patients seldom presents to a dermatologist for its treatment. The incidence of transverse nasal lesions was 0.33% in our study group. It is totally asymptomatic and rarely bothersome to the patient. It has a higher preponderance for females over males (4:1). It occurs sporadically in general population. Familial cases have been reported. [3] In our study, we found 15% of positive family history which is quite significant.

Wimmershoff et al., reported two cases of TNG and both of his patients had onset of TNG since birth. [6] However, none of our patients gave similar history. In contrast to a higher incidence of TNG reported in children in previous western studies, [1],[3] we observed it to be more common in 15-45 year (70%) age group; this implies that this is a condition of adolescents and adults. This observation is in concordance with report of Pavithran. [4] We also observed a lower prevalence in older age groups, correlating with the previous studies. [4]

The location of an additional loop-like groove, mentioned above, can be related with the site of attachment of nasal bone and the two upper lateral cartilages which are attached together by fibrous septa, similar to the junction of two cartilages present below.

In one case, multiple transverse groove-like lesions were present over the nose. These lesions are basically wrinkles seen in old age or photoaging [Figure - 6]. In contrary to TNG, on stretching the skin between thumb and index finger, these lines become less prominent or flatten. In addition, these lesions were short, not extending to the full breadth of the nose, were multiple in numbers and also present over other areas of face. Two reports of multiple, short wrinkles or crease over the nose which disappear on stretching has been described with allergic rhinitis. [3],[7] TNG remains prominent even after skin is stretched.

The various morphological presentations of this entity were observed. Previously only a groove had been described. We, in our study observed lesions in the form of a line, strip, ridge and a loop in addition to the groove which was the most common presentation. This implies that, TNG is not a single entity but a subset of transverse nasal lesions.

In all, TNG is an interesting cutaneous defect and forms a subset of transverse nasal lesions which comprises of groove, line, strip, ridge and a loop. The site and morphology of the lesion could vary in different individuals relating to above discussed factors. So far, only few studies have been reported worldwide, including one from India. Considering its idiopathic origin and increasing cosmetic concerns, we look forward to larger studies including the histopathological findings to further enlighten our knowledge over this condition.

The authors would like to thank the patients for providing consent to use patients photographs in this article.