Onychomycosis comprises a major burden of clinical disease caused by dermatophytes, with a reported prevalence of human onychomycosis ranging from 2% to 8% worldwide.[1] In India, 0.5%–5% of onychomycosis has been reported in general population, with a 5-year study confirming its prevalence in 45% of patients analyzed from North India.[2],[3]

The choice of systemic antifungals is influenced by the clinical severity of the disease, response to previous therapy, and cost of treatment. However, in recent years, clinical failure has been reported in upto 25%–40% cases. In toenail onychomycosis, a 10% relapse has been reported 12–16 weeks after cessation of therapy.[4],[5] Our study involved 30 clinically diagnosed and laboratory-confirmed [by potassium hydroxide mount (KOH) and culture] patients suffering from dermatophytosis of nail, who attended the dermatology out-patient department of University College of Medical Sciences and Guru Teg Bahadur Hospital, Delhi, India (a tertiary care hospital). The study was conducted from August 2014 to December 2015. Toenail onychomycosis was present in 16 (53.3%) and fingernail onychomycosis in 11 (36.7%) patients (the most common type being distal lateral subungal onychomycosis). Three (10%) cases had involvement of both fingernails and toenails. [Table - 1]. The cultured isolates included Trichophyton rubrum (n = 10) and Trichophyton mentagrophytes (n = 20) as obtained from the nail samples cultured on Sabouraud's dextrose agar with antibiotics chloramphenicol (0.05 g/L), gentamicin (20 mg/L), and cycloheximide (0.5 g/L), incubated at 25°C.In vitro antifungal susceptibility testing of the isolates as per Clinical and Laboratory Standards Institute (CLSI: M38-A2) demonstrated a minimum inhibitory concentration (MIC) in the range of 0.5–4 μg/mL to fluconazole, 0.0313–1 μg/mL to itraconazole, and 0.0313–1 μg/mL for terbinafine in 80% of T. rubrum and T. mentagrophytes isolates.[6] 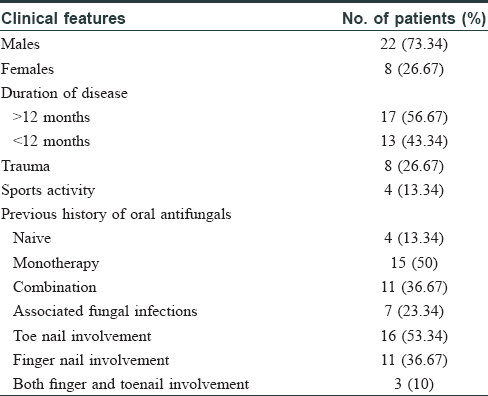 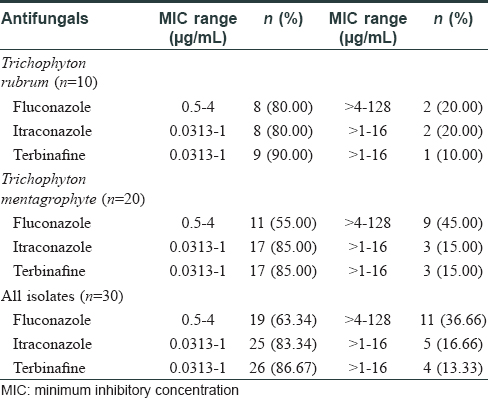 Table 2: In vitro susceptibility of Trichophyton rubrum and Trichophyton mentagrophytes to fluconazole, itraconazole, and terbinafine

We observed that antifungal resistance has emerged as an intense and distressing issue, with an alarming rise in clinical and mycological failure. The high MIC depicts a poor susceptibility to the antifungals which may either be intrinsic or the strains may have acquired with prior exposure to antifungals.[7],[8] Most of our patients were previously on various antifungals for prolonged durations.

We also observed a geographical preponderance of T. mentagrophytes over T. rubrum as the causative agent of onychomycosis. Taking advantage of their anthropophillic adaptation, the former is able to successfully establish a chronic infection.

Itraconazole and terbinafine showed low MICs in the range of 0.25–0.5 μg/mL, which were observed in 40% and 23.3% isolates, respectively. This indicates that a large proportion of dermatophytes are still susceptible, therefore these drugs should be used with caution in selected patients to avoid further development of resistance. More often than not, suboptimal or raised MIC levels allow the dermatophytes to adapt to stress, which may promote their survival and dissemination of the mutants in the community. Due to toxicity, escalating the dosage of a drug to overcome MIC may not always be a feasible option. Herein, post-treatment follow-up and mycological assessment can therefore become an important tool to monitor treatment failures and relapses. Moreover, as the susceptibility cut-offs are yet to be defined for dermatophytes, the correlation ofin vitro MIC values with clinical cure may provide valuable guidance to ascertain the dosage and treatment strategies for onychomycosis. Molecular determination of drug resistant genes would also facilitate in determining the clinical failures, in future. Clinicians must also remember that therapeutic outcome may vary with respect to the dermatophyte species isolated versus non-dermatophyte mould, which does not often respond to conventional anti-dermatophyte drugs. The limitations of our study are (1) interpretation of MIC values in dermatophyte isolates was difficult owing to the absence of well-defined cut-off values and (2) post-treatment follow-up and its correlation with MIC values were found wanting.

In conclusion, our study could demonstrate significantly lower mean MIC values for terbinafine and itraconazole when compared with fluconazole, reaffirming their potential use and still the preferred drugs of choice for treatment of onychomycosis.[5] With a paucity of systemic antifungals, the time is ripe for clinicians to consider the underlying host factors as reasons for delay in response, prescribe appropriate antifungals, and allow the drug to reach peak concentration for its action which may prevent development of chronicity of the disease, and resistance.

The study was supported by the intramural funding from the University College of Medical Sciences (University of Delhi) and Guru Teg Bahadur Hospital, Delhi, India.