Atopic dermatitis is a chronic, relapsing, intensely pruritic, inflammatory skin condition with a significant socioeconomic importance and a negative impact on quality of life.[1] Usually, there is an early onset but it can start at any age.[2] The worldwide prevalence of childhood atopic eczema varies between 3% and 20.5% while in India it is between 2.4% and 6%.[3]

Although the diagnosis of atopic dermatitis is mainly clinical as per the criteria of Hanifin and Rajka,[4] it is best understood as a chronic inflammatory condition with both IgE and non-IgE-mediated immune dysregulation.[5] The skin shows a poor barrier function, likely due to a filaggrin mutation, allowing the entry of allergens; hypersensitivity to these allergens worsens atopic dermatitis.[6] Conversely, avoidance of these allergens leads to an improvement. Both food and aeroallergens are considered to have a role, and they can be evaluated based on the history of exposure along with laboratory tests.

Two types of hypersensitivity reactions are involved in atopic dermatitis:

The pioneers of the atopy patch test were Rostenberg and Sulzberger who in 1937 used aeroallergens in patch testing.[8] However, it was not until 1982 that the patch test was performed specifically in atopic dermatitis patients by Mitchell.[9] Ring coined the term “atopy patch test” in 1989.[10] At present, the most widely followed protocol is that of the European Task Force on Atopic Dermatitis.[11]

Internationally, a few commercial kits are available – ALK-Abello, Diallertest and Stallergenes. Different allergens used include prick test solutions on filter paper, purified allergens in hydrogel or in petrolatum and native food. In India, patch test solutions are aqueous allergens (supplied by Creative Drug Industries, Navi Mumbai) which are loaded in aluminum patch test chambers with filter paper using the dropper provided by the manufacturer (Systopic Laboratories, New Delhi).[12] Some of the antigens used in India are listed in [Table - 2]. Others include corn, potato, peanut, soy, chicken, beef, pork, fish, cockroach antigens and tree pollen.[13] Isotonic saline solution or petrolatum can be used as the negative control. Best results are obtained with purified allergens with a known protein content. Allergen strengths are expressed in protein nitrogen units for aeroallergens and 1% weight by volume for food allergens. Protein nitrogen unit between 5 and 7 is ideal. Allergen concentration needs to be higher for atopy patch test than skin prick test.[7] 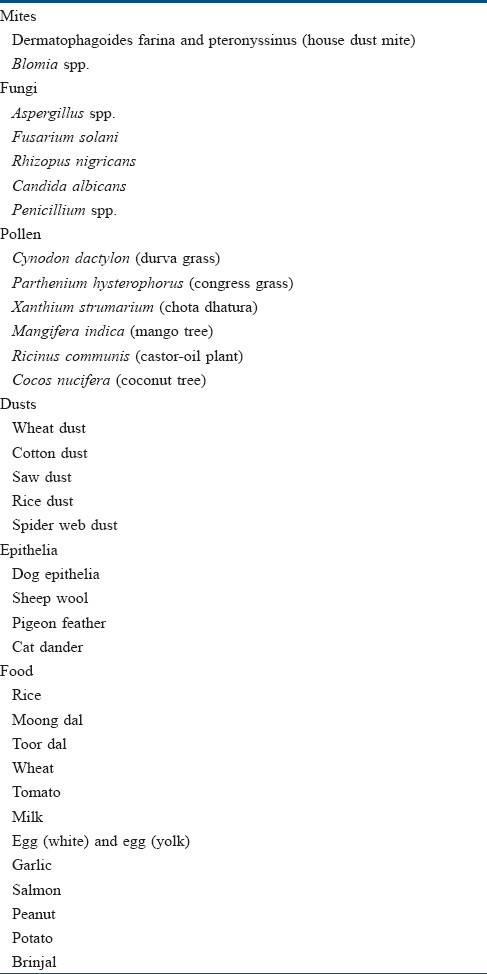 Table 2: List of some allergens available for use in atopy patch test in India

Using a dropper, the allergen extracts are placed on a filter paper loaded individually into 12-mm aluminum test cups. These are then placed on the skin of the back using an adhesive tape. Patient is asked to avoid activities such as vigorous exercise and sweating that may lead to the dislodgement of cups. The test chambers are removed after 48 hours when the first reading is done. Final reading is at 72 hours.[15],[16]

Readings are based on the European Task Force on Atopic Dermatitis key shown in [Table - 3]. This is roughly similar to the International Contact Dermatitis Research Group reading key used for conventional patch testing.[11]

Important food allergens, known to cause not only atopic flares but also gastrointestinal disturbances, include cow's milk, egg, wheat proteins, soy, peanuts, seafood and rice. Food allergy depends upon the child's age and the eating traditions of the family and the nation. Milk, soy and egg were the most common allergens causing positive atopy patch test.[19],[20]

The importance here lies in the fact that patients showing positive atopy patch test to food allergens have relief from atopic flares and gastrointestinal complaints on eliminating the offending food from the diet.[21],[22] Food allergens were found to be less significant compared to the aeroallergens in an Indian study.[13] Atopy patch test has also been performed with food additives, implicating carmine in the evolution of atopic dermatitis in some patients.[23]

Atopy patch test helps to determine the patients in whom atopic flares are related to extrinsic allergen exposure, and these patients can be counselled to avoid these triggers as far as possible. Although it is not possible to completely eliminate house dust mites, a few changes can help minimize the exposure such as:

Narrowing down the allergens to a select few, especially in the case of food allergens, can avoid unnecessary elimination of large food groups from the diet.

While double-blind placebo-controlled food challenge is still the gold standard for diagnosing food allergy, the procedure involves repeated food administration over a period of few hours and carries the risk of dangerous anaphylaxis in a few patients.[24] Atopy patch tests can be used as a substitute here. In one study, atopy patch test predicted the results of oral food challenge in 28 out of 33 cases. There was 100% negative predictive value for atopy patch test.[25] Another study showed that positive predictive value was best for skin prick test (0.91) followed by radioallergosorbent test (RAST) (0.82) followed by atopy patch test (0.63).[26] Atopy patch test can be a useful tool to study the pathomechanisms of atopic dermatitis.

However, atopy patch test is not suitable for diagnosing immediate food allergies. It is expensive, time-consuming and cumbersome. It may be difficult to interpret in cases of “angry back syndrome” where a strong positive patch test could cause hyperreactivity to other patch tests. Being prone to skin irritations, atopic patients may show higher degree of false positive reactions. Different results may be obtained with variations in allergen (whole mite vs mite extract), allergen concentration, vehicle, site of testing, skin condition at the time of testing and reading time. There can be local flares of eczema, irritation to the adhesive used and urticarial reactions to allergens such as egg and soy.

Atopy patch test is generally not considered in isolation. It can be thought of as another arrow in the quiver available for the diagnosis of atopic dermatitis. It should be used in addition to a good history, clinical examination and skin prick test and serum-specific IgE. A combination of all these tools helps in a better understanding of atopic dermatitis.