Atrichia congenita with papular lesions (APL) represents a complex and heterogenous group of genodermatoses characterized clinically by complete and irreversible hair loss shortly after birth, and is associated with the development of keratin-filled cysts over the body resulting from homozygous mutations in the hairless gene (HR). [1]

A 38-year-old lady presented with complete loss of hair on the body. She had scanty scalp hair at birth which was gradually lost. At 1 year of age, she developed multiple skin colored lesions on the face and body, which progressively increased in number. By the age of 2 years, she had complete loss of scalp and body hair. Her alopecia was unresponsive to therapy [Figure - 1]. She did not give a history of delayed milestones, decreased sweating, dimness of vision, decreased hearing, seizures, atopy, or bone pains. She was born of a second degree consanguineous marriage. Her siblings were asymptomatic. None of her family members had similar complaints.

On examination, she had complete absence of hair on the body and scalp. Multiple skin colored smooth papules and nodules of size 0.5-2 cm were present on the entire body. Suture lines on the scalp were hypopigmented. She had no abnormalities related to her mucosae, nails, teeth and sweat glands. Her palms and soles were normal. She had no bony abnormalities, dysmorphic features or systemic involvement.

A skin biopsy from a nodule on the right forearm revealed multiple dermal cysts containing keratinous material. No normal hair follicles were visualized. There was no evidence of inflammation [Figure - 2].

Based on the clinical presentation and histopathology, a diagnosis of APL was made.

APL is a rare, autosomal recessive form of total alopecia of the scalp, eyebrows, eyelashes, axillary and pubic hair, characterized by hair loss soon after birth and the development of keratin-filled cysts over extensive areas of the body. The patients have normal development, hearing, teeth and nails. There are no abnormalities of sweating. Heterozygous individuals have normal hair and are clinically indistinguishable from genotypically normal persons. [2] This condition has been noted for decades among gypsies known as Irish Travelers, who have existed as a distinct indigenous ethnic minority within Ireland. It was first referred to as congenital atrichia by Ahmad et al. [3]

The hair matrix cells in APL appear to undergo a premature and massive apoptosis, together with a concomitant decline in Bcl-2 expression, a loss of Neural Cell Adhesion Molecule (NCAM) positivity, and a disconnection from the overlying epithelial sheath essential for the movement of the dermal papilla. As a consequence, the hair bulbs and dermal papillae remain stranded in the dermis, and indispensable messages between the dermal papillae and stem cells in the bulge are not transmitted, so no further hair growth occurs. [2]

Miller et al. [4] reported a patient with Vitamin D resistant rickets type IIA, a compound heterozygote for mutations in the Vitamin D receptor gene (VDR) in which the phenotype of atrichia with papular lesions was identical to that seen in patients carrying mutations in the HR gene. It is hypothesized that the VDR and HR genes, which are both zinc-finger proteins, may be in the same genetic pathway that controls postnatal cycling of the hair follicle. [4]

Yip et al. [5] proposed revised clinical criteria for APL based on their personal observation and have made a retrospective analysis of cases described in literature. These features are listed in [Table - 1]. 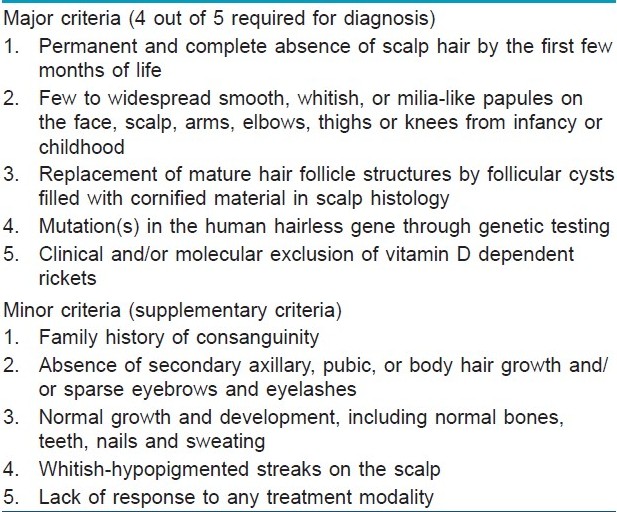 Published estimates of the prevalence of APL remain surprisingly low, considering that pathogenetic mutations in HR have been found in distinct populations around the world. [2] APL is more common than previously thought and is often mistaken for the putative autoimmune form of alopecia universalis. [5]

We would like to acknowledge the contributions of Dr. Priva Aley Joseph MD, Dr. Joyce Ponnaiya MD and Dr. Mary Jacob DVD MNAMS.