Botryomycosis is a chronic granulomatous reaction to bacterial infections. The lesions are characterized by multiple abscesses, sinus formation, fistulas and skin ulceration, mostly caused by Staphylococcus aureus. Appropriate antibiotics, surgical drainage and excision are common methods that are employed to treat botryomycosis.

A 40-year-old female presented to the Dermatology Outpatient Department of a tertiary care hospital, with a history of severely pruritic skin lesions over the upper and lower extremities and abdomen since 3 months. Lesions initially started over the left ankle as intensely pruritic red papules. Later, lesions appeared on the right leg and abdomen within a few days. There was history of serous discharge in a few lesions following scratching. No constitutional symptoms were present. There was no history of prior insect bite, trauma, gastrointestinal disturbances, diabetes or any chronic illness.

On physical examination, multiple erythematous excoriated papules, and few crusted lesions were seen in a bilaterally symmetrical distribution on the extensor aspect of forearms, lower legs, abdomen, buttocks and upper back. [Figure - 1]. There were no lesions in the web spaces or over the genitalia and no family history of similar lesions. The diagnosis of scabies was ruled out and a provisional diagnosis of dermatitis herpetiformis was considered. Findings from routine blood investigations such as a hemogram, blood sugar profile, liver function and kidney function tests were all found to be within normal limits. Serological tests for HIV, HbsAg and hepatitis C virus antibodies were found negative. Histopathological examination from an excoriated papule on the ankle revealed a grain in the center of suppurative neutrophilic inflammation, in the mid-reticular dermis, with a mild surrounding lympho-histiocytic infiltrate. The granule was composed of clumped non-filamentous cocci with a peripheral eosinophilic rim (hematoxylin and eosin, ×400). Periodic acid–Schiff staining was negative [Figure - 2]a and [Figure - 2]b.

Direct immunofluorescence was negative for IgG and IgA. Microbiological examination of the punch biopsy specimen showed no growth on culture. A diagnosis of cutaneous botryomycosis was made. The patient was continued on oral erythromycin and antihistamines for three more weeks along with topical fusidic acid and bland emollients, following which all the skin lesions healed with post-inflammatory hyperpigmentation [Figure - 3].

Botryomycosis is caused by Staphylococcal aureus, but several other organisms such as Pseudomonas aeruginosa, Escherichia coli, Proteus, Propionibacterium acnes, alpha-hemolytic streptococci, peptostreptococci, Actinobacillus lignieresii and Moraxella nonliquefaciens species have been isolated singly or in combination.[1],[2],[3],[4] The proposed pathogenesis states that it could be the symbiosis of low virulence of inoculated microorganism with impaired host immunity. Predisposing factors are trauma, alcoholism, diabetes, renal disease, liver disorders, malnutrition, cystic fibrosis and immunosuppression such as in HIV.[3]

There are two forms of the disease, cutaneous and visceral. Visceral involvement occurs commonly in the lungs, although involvement of the brain, kidney, spleen and liver have been described.[5] Usually, the lesions are predominantly cutaneous and subcutaneous nodules which ulcerate, suppurate and form plaques, ulcers and sinuses, which heal slowly, and leave atrophic scars. In immunocompetent patients, lesions are found primarily on the extremities, especially in agricultural workers who do not wear footwear, and are thus subjected to repeated trauma.[6] 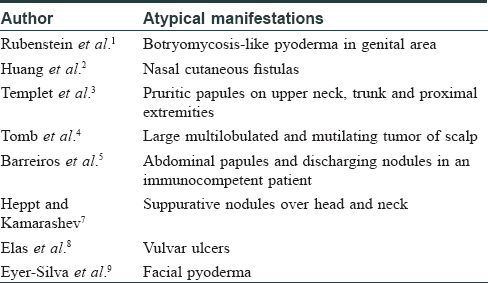 There is a paucity of literature on botryomycosis presenting as disseminated, itchy excoriated papules involving the trunk and extremities, which misled us in the beginning. Proper history and biopsy are warranted in patients presenting with such lesions for early diagnosis and effective treatment.

The authors certify that they have obtained all appropriate patient consent forms. In the form, the patient has given her consent for her images and other clinical information to be reported in the journal. The patient understand that name and initials will not be published and due efforts will be made to conceal identity, but anonymity cannot be guaranteed.[9]