Author's reply: Significance of seropositivity for syphilis in asymptomatic individuals

We thank the author for his interest in our article entitled "Syphilis among sexually transmitted infections (STIs) clinic attendees in a tertiary care institution: A retrospective data analysis" and for raising certain valid points. [1] Except in the early stage of infection where dark ground microscopy can aid in the detection of causative treponems in material collected from the lesion, serology remains the mainstay of diagnosis in syphilis.

In our institution all patients attending the STIs clinic are offered Venereal Disease Research Laboratory (VDRL) test screening for syphilis with a repeat testing (irrespective of the initial titer) after 3 weeks to detect any rise in titers. Dark ground microscopic examination is carried out wherever indicated.

Patients who manifest a VDRL titer equal to or more than 1:4 with no clinical evidence of syphilis are routinely advised confirmation by Treponema pallidum hemagglutination (TPHA) test as per the recommendations of World Health Organization (WHO). [2] Though some consider a VDRL titer of 1:8 or more as true reactive, [3] it has been documented that VDRL titer below 1:8 should not be taken as negative if confirmed by a positive TPHA. [4],[5]

A positive TPHA with non-reactive or weekly reactive VDRL may be seen in treated patients or in late stages of syphilis. [6] Persistence of positive serology in the treated (serofast reaction) poses a problem in distinguishing between untreated late latent syphilis patients from those showing serofast reaction. Centers for Disease Control and Prevention (CDC) recommends that the decision on such instances should be taken on the basis of history of adequate treatment. [6]

All clinically or serologically diagnosed syphilis cases attending our STI clinic were assessed for any ophthalmologic or central nervous system manifestations of syphilis. Those with central nervous system or ophthalmologic manifestations of syphilis and those with co-existing human immunodeficiency virus (HIV) infection were recommended cerebrospinal fluid (CSF) analysis to rule out neurosyphilis. The two neurosyphilis cases in our study were detected following CSF study performed in patients with syphilis of unknown duration who complained of dimness of vision and headache, respectively. All the late syphilis cases were evaluated with electrocardiography and echocardiogram with the help of a cardiologist to rule out cardiovascular syphilis. None of our study population were found to have this complication.

We tried to avoid misdiagnosis of serofast reactions as syphilis of unknown duration by enquiring about previous treatment. But we cannot rule out the possibility of false positive reactions in at least some of our patients. Though not as common as with VDRL, false positive results can occur with TPHA. [7] CDC recommends that Treponema pallidum particle agglutination assay (TP-PA) should be used as the confirmatory test in doubtful cases. [6],[8] But this was not possible in our set up due to financial constraints. Hence we managed these patients as late latent syphilis (after ruling out cardiovascular and neurosyphilis) so as to avoid complications of untreated disease.

Nearly 50% of our patients were referred to us following positive serology for syphilis detected during mandatory medical checkup for going abroad, which was not surprising as they underwent both VDRL and TPHA testing, unlike in our STI clinic where TPHA test is offered only to those with VDRL reactivity 1:4 or more. This might lead to missing detection of some of the late latent syphilis cases. Recently some centers have opted for using treponemal test as the initial screening test to detect all the late latent cases and subsequent non-treponemal test to assess disease activity (reverse sequence screening). [6]

The reduction noted in the number of patients attending our institution with STIs during the past decade was not reflected in syphilis cases. A reduction in the early years of the decade was followed by a gradual increase in syphilis cases in the latter half [Table - 1]. In fact, the rise in total syphilis cases in the past couple of years was due to an increase in early stage disease as seven of the eight early syphilis cases were diagnosed in the last 3 years. The number of cases with syphilis of unknown duration has remained more or less the same over the past 6 years. A similar observation has been made by others. [9] We believe this to be a disturbing finding pointing to the rise in active disease transmission in the community since for each infective stage disease seen in a tertiary centre there will be several hidden cases in the community. Many such patients may either get partial treatment due to the widespread use of penicillins and cephalosporins nowadays for several common ailments or go untreated and remain in asymptomatic latency. 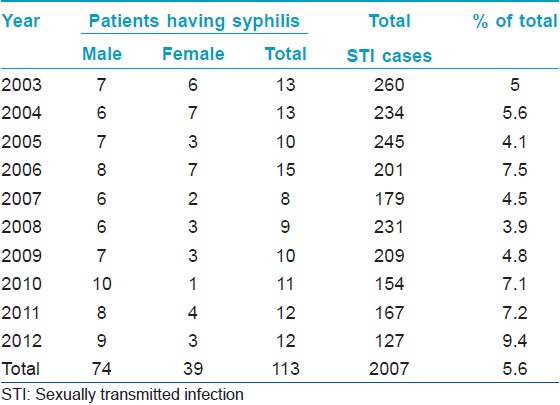 ′Prenatal syphilis′ is used to denote syphilis transmitted to the fetus in utero by the infected mother and is considered to be a better terminology than congenital syphilis. [10],[11]

We suggest that all STI patients should be offered screening for syphilis with both VDRL and TPHA tests so as to detect all late latent syphilis cases.