In recent years, there has been a paucity of data from northern India on the bacteriological profile and antimicrobial susceptibility patterns of isolates from cases of pyoderma and the incidence of community-acquired MRSA from pyodermas. We tried to correlate the clinical and bacteriological profile of community-acquired pyodermas, and establish the isolation rate of methicillin resistant Staphylococcus aureus (MRSA).

One hundred patients of all ages and both sexes attending the outpatient Department of Dermatology at Lok Nayak Hospital (LNH) presenting with infection of the skin and soft tissue (both primary and secondary) with no history of hospitalization in the preceding one year and no history of intake of any antimicrobial therapy during the previous month were enrolled in this case series. Clinical and bacteriological profiles were studied using standard techniques. The minimum inhibitory concentration (MICs) of oxacillin, vancomycin, fusidic acid(range; 0.016-256 ug/ml) and mupirocin(Range; 0.064-1024 ug/ml) were determined by the E test (AB - Biodisk Solna, Sweden). Staphylococcus aureus ATCC 25923 reference strain was included as control.

The age of the patients varied from 6 months to 60 years. The peak incidence of pyoderma was observed in the first decade with no significant predominance of either sex. There were 88 cases of primary pyoderma and 12 cases of secondary pyoderma, maximum incidence being of impetigo contagiosa(42) similar to other Indian reports. [1] In all, 96 cases yielded growth and from these, a total of one hundred bacterial isolates were obtained.[Table - 1]. Similar to various other studies, [1],[2],[3] in this study also Staphylococcus aureus was a predominant pathogen, isolated as the sole pathogen in 79% of the cases while beta-hemolytic streptococci were isolated as the sole pathogen in 9% of the cases similar to the findings of other workers. [1],[2],[3] A total of 13 isolates of beta- hemolytic streptococci were isolated among which 12 were group A streptococci while one isolate was group B streptococci, confirmed by serogrouping using a commercially available latex test kit for serogrouping (Plasmatec Laboratory Products Ltd.)

A total of 83 strains of Staphylococcus aureus were tested for sixteen antimicrobial agents by disc diffusion method employing the Stokes technique. All the strains (100%) were resistant to penicillin. The resistance seen to most other antimicrobials was fairly low. All the strains appeared to be sensitive to amikacin, fusidic acid, vancomycin, teicoplanin, linezolid, quinpristin - dalfopristin [Table - 2]. 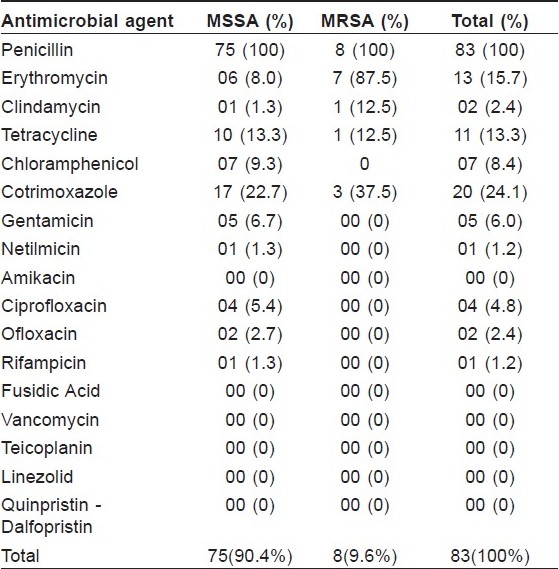 Seventy five of the total of 83 strains(90.4%) of Staphylococcus aureus were sensitive to methicillin (MSSA) and eight strains appeared to be resistant to methicillin (MRSA). MRSA identification was done by three methods namely oxacillin agar screening technique, MIC of oxacillin by the E test and cefoxitin disc diffusion technique.

Although MRSA infections are acquired primarily in hospital setting, of late it is felt that probably MRSA is circulating in the community as well. In 2004, Nagaraju et al,[3] reported an isolation rate of MRSA as 10.9% from community acquired infections in India, similar to our study(9.6%) indicating that the prevalence of MRSA in the community has remained constant. The susceptibility of the eight strains of MRSA was determined against 16 antimicrobials. In 1991, Gosbell et al[4] coined the term NORSA to denote non-multi resistant oxacillin resistant Staphylococcus aureus which tested resistant to methicillin or oxacillin and were either sensitive to erythromycin or resistant to erythromycin and sensitive to ciprofloxacin or tetracycline. All eight strains fulfilled the definition of non-multiresistant MRSA (NORSA).

The MIC of the Community MRSA isolates was done by the E test. It was interesting to note that all the eight strains showed MIC values of >256 μg/ml for oxacillin. All eight strains were confirmed as MRSA by both the agar screening test and the cefoxitin disc diffusion method. In the latter, none of the strains showed any zone of inhibition, further strengthening the confirmation that all these strains had MICs of >256 μg/ml for oxacillin.

The results of disc diffusion that were performed for vancomycin were in total agreement with the MIC results, i.e., all the strains appeared sensitive to vancomycin by both the disc diffusion method and the MIC determination by the E test (an MIC 90 value of 2.0 μg/ml) as it is well known that the widely used disc diffusion technique does not differentiate strains with reduced susceptibility to vancomycin from susceptible strains. [5] All the MRSA strains also appeared sensitive to both fusidic acid and mupirocin by the E test. To the best of our knowledge, there are no published reports about the MIC values of community MRSA to these agents used commonly in dermatological practice. We observed 100% sensitivity to fusidic acid among all the strains of Staphylococcus aureus including MRSA by the disc diffusion method and the E test, done for the eight strains of MRSA showed an MIC range of 0.016-0.047 μg/ml for fusidic acid [Table - 2] and [Table - 3]. None of our strains of MRSA appeared resistance to mupirocin. While the MIC range for mupirocin ranged between <0.064 and 0.125 μg/ml, the MIC 90 value itself was quite low at 0.125 μg/ml [Table - 3].

Table 3 : MICs of MRSA strains to various antimicrobials by the E test

To conclude, MRSA as a cause of pyodermas is a reality albeit with very low incidence rate (9.6%). It was heartening to note that, all the MRSA from the community appeared to be NORSA leaving the therapeutic options to the treating clinician wide open. All the strains were uniformly sensitive to two important antimicrobials used in dermatological practice, viz, fusidic acid and mupirocin and the MICs to both these agents was very low.