A 19-year-old woman presented with asymptomatic reddish eruptions on the right upper limb for 6 years. The eruption started on the right arm and gradually progressed downward in a linear fashion to involve the right forearm as well. There was no history of trauma, contact allergy or bleeding from any site. Past history and family history were non-contributory.

Examination revealed multiple minute brightly erythematous grouped macules and irregular patches arranged in a serpiginous pattern extending from the right arm to right mid-forearm in a Blaschkoid distribution [Figure - 1]a and [Figure - 1]b, [Figure - 2]a,[Figure - 2]b,[Figure - 2]c,[Figure - 2]d. Lesions were non-blanchable on diascopy [Figure - 3]a. Mucocutaneous and systemic examination was unremarkable. Ophthalmological examination did not reveal any abnormality.

Laboratory investigations including complete hemogram and serum biochemistry profiles were within normal limits. On dermoscopy, multiple well-demarcated red lagoons were found [Figure - 3]b and [Figure - 3]c. Skin biopsy from the erythematous macules showed dilated capillaries in the dermal papillae and upper dermis. No inflammatory infiltrate or extravasation of red cells was observed [Figure - 4]a and [Figure - 4]b.

Based on the clinical features, diascopy, dermoscopy and histopathological findings, a diagnosis of angioma serpiginosum was made. The patient was counseled regarding the benign nature of the condition and was advised pulse-dye laser therapy as she was cosmetically concerned.

Angioma serpiginosum was first described by Hutchinson in 1889 and was named by Crocker in 1894.[1] Clinically, lesions of angioma serpiginosum are characterized by multiple, minute copper-colored to bright red angiomatous puncta occurring in small clusters and sheets. The arrangement and extension of the lesions may produce a serpiginous pattern.

Although it affects both sexes at all ages, 90% occur in girls under the age of 16. Predominant sites of involvement are the lower extremities and buttocks though atypical sites such as breast and soles may also be involved. Extensive involvement has also been reported.[2],[3],[4] It is usually sporadic but familial occurrence has also been reported. Though the condition is limited mainly to skin, the ocular and nervous systems may also be involved.[5]

Incomplete blanching occurs with pressure, but lesions are not purpuric.[7] The puncta represent dilated non-inflamed capillaries in the dermal papillae. These can be seen with dermoscopy.[7] Dermoscopy shows numerous small, relatively well-demarcated, round to oval red lagoons.[8]

Histopathology reveals dilated, thin-walled capillaries in some of the dermal papillae and the upper dermis. Epidermal changes and extravasation of red blood cells do not occur. 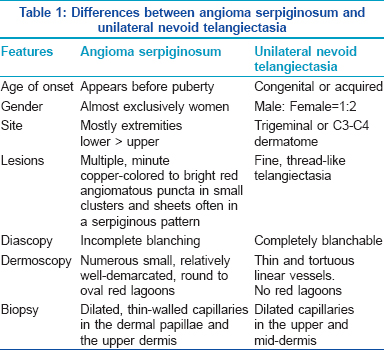 Angioma serpiginosum is slowly progressive and chronic. Spontaneous involution may occur but is never complete. Treatment with a pulsed dye laser may improve or eliminate such lesions. Early diagnosis of angioma serpiginosum may avoid unnecessary hematological work-up as the condition simulates purpura.

Linear or Blaschko-linear angioma serpiginosum appears to be a rare condition and we were able to find only a few previously published reports.[9],[10],[11],[12]