The incidence of pulmonary tuberculosis with leprosy varies from 2.5-7.7% in India to 13.4% in South America. [1] However, the simultaneous occurrence of leprosy and cutaneous tuberculosis is uncommon.

A 70-year-old male presented to us with complaints of pain and limitation of movement of the right shoulder joint for two years. A few months ago, he noticed a single non-healing sinus with yellowish colored discharge in the middle of the right arm.

On dermatological examination, a single sinus with puckered scarring overlying a hypoaesthetic macule of size 5 Χ 7 cm was noted on the lateral aspect of the right midarm [Figure - 1]a. No regional lymphadenopathy was observed. On further examination, multiple well- to ill-defined hypopigmented macules were observed on the trunk and extremities [Figure - 1]b with ill-defined borders, dry surface and sparseness of hair. The sensations of temperature, pin prick and superficial touch were impaired over these lesions. Movement of the right shoulder joint was limited beyond 30 degrees of abduction. The ulnar nerves were firm, non-tender and enlarged on both sides.

All hematological and biochemical investigations were within normal limits except the erythrocyte sedimentation rate which was 26 mm at the end of the first hour. Slit skin smear from the hypopigmented, hypoesthetic macules did not show any acid-fast bacilli. Mantoux test reading was 26 mm induration after 48 hours. Radiological examination of chest was normal, whereas X-ray of the right shoulder joint showed a lytic lesion in the head of humerus with an overlying cortical breach [Figure - 2]a. Sinogram obtained by injecting radio opaque dye through the opening of the cutaneous sinus delineated a communicating path between the skin lesion and the underlying bone [Figure - 2]b.

Histopathological examination from the hypopigmented lesion below the discharging sinus revealed an epithelioid cell granuloma with lymphocytic infiltrate [Figure - 3]a. Fite Faraco stain did not show acid-fast bacilli. Histopathological evaluation from the wall of the sinus tract revealed a granuloma in the mid-dermis composed of epithelioid giant cells, lymphocytes and plasma cells with evidence of suppuration [Figure - 3]b. However, tissue polymerase chain reaction and culture for Mycobacterium tuberculosis were negative. Bone biopsy from the lytic lesion in the humerus revealed a tuberculoid granuloma with caseous necrosis [Figure - 3]c. No acid-fast bacilli were found in the wall of the sinus on Ziehl Neelsen staining.

Based on the clinical and histopathological findings, a diagnosis of borderline tuberculoid leprosy with scrofuloderma was made. World Health Organisation Directly Observed Therapy- Short course (DOTS) Category I anti-tubercular therapy along with multibacillary multidrug therapy (MB-MDT) for leprosy (except the monthly supervised dose of rifampicin) was prescribed for a duration of one year.

The relationship of leprosy and tuberculosis is enigmatic. The simultaneous occurrence of the two infections has been argued against due to a number of reasons. Firstly, both the diseases share many similarities in that both are caused by gram positive, acid fast mycobacteria and are characterized histopathologically by a granulomatous inflammatory response. The 65 kilodalton antigens of M. leprae, M. tuberculosis and M. bovis display greater than 95% homology in amino acid sequence as evidenced by conversion of both lepromin and tuberculin intradermal test after injection of bacillus Calmette-Guerin (BCG). [2] Lastly, the higher reproductive rate of the tubercular bacilli as compared to lepra bacilli does not allow both infections to occur simultaneously. [3] However, a few case reports [Table - 1] [4],[5],[6],[7] including the present one clearly illustrate that if at all there exists cross immunity between the two bacilli, it is only partial and the two bacilli can co-exist by eliciting specific cell mediated immunity mediated by different sub-populations of CD4/CD8 cells. [7] 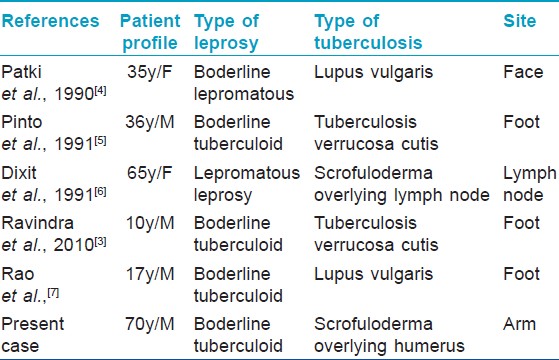 Table 1: Reports of concurrent occurrence of cutaneous tuberculosis with leprosy

Dixit et al., [6] reported a 65-year-old woman with borderline lepromatous leprosy who developed multiple discharging tubercular sinuses while on steroid therapy for type 1 reaction. This case emphasizes the need to recognize both infections because steroid therapy for reaction in leprosy may exacerbate underlying tuberculosis. In addition, monthly dosing of rifampicin in leprosy may contribute to acquired drug resistance and reduced effectiveness if there is concurrent tuberculosis.

Our case of dual infection with M. leprae and M. tuberculosis is of particular interest because the lesion of one disease presented directly over the lesion of the other.