Bullous pemphigoid and antecedent neurological diseases: An association with dementia

Bullous pemphigoid typically affects the elderly, accounting for 88% of all the cases of subepidermal immunobullous disorders at our center.[1],[2] In Singapore, the annual incidence rate of bullous pemphigoid is approximately, 7.6 cases per million population with a mean age at diagnosis of 77 years.[2]

In this retrospective case–control study, the study population consisted of all inpatients with a confirmed diagnosis of bullous pemphigoid who were referred to the dermatology service at the Tan Tock Seng Hospital, Singapore between January 2010 and May 2015. The diagnosis of bullous pemphigoid was based on the presence of all of the following criteria: (1) Typical clinical features of subepidermal blisters affecting various parts of the body, as assessed by dermatologists, and consistent findings on (2) histology and (3) direct immunofluorescence. Age- and sex-matched controls in a 1:1 ratio were randomly selected from inpatients with other dermatological conditions admitted during the same period. Patients who had other autoimmune bullous skin conditions (such as pemphigus vulgaris and pemphigus foliaceus) and autoimmune connective tissue diseases (such as lupus and dermatomyositis) were excluded from the study.

Records of all patients and controls were evaluated for a past medical history of any neurological diseases when they were first diagnosed with bullous pemphigoid. Neurological diseases evaluated included dementia, stroke, Parkinson disease, epilepsy and psychiatric disorders. Confirmation of the neurological diagnoses was made using the International Classification of Disease diagnosis codes in the patients' medical records, as well as appropriate medications being prescribed for the respective neurological conditions. The diagnoses were made by geriatricians and neurologists based on clinical features, evidence of impairments in daily living and education-adjusted mini–mental state examinations, after exclusion of secondary causes.

Variables included in the analysis as possible confounding factors were age, gender, racial group, functional disability and medications prescribed for neuro-psychiatric diseases. Other comorbidities previously reported to be associated with bullous pemphigoid, such as ischemic heart disease, diabetes mellitus and internal malignancies, were also included in the analysis. Racial groups were categorized into “Chinese,” “Malay,” “Indians,” “Caucasians” and “other races.” Functional status was categorized into “independent,” “assisted,” “wheelchair-bound” or “bed-bound.” Comorbid conditions were determined based on the International Classification of Disease diagnosis codes in the patients' medical records.

The relationship between bullous pemphigoid and a medical history of neurological diseases was analyzed using the Chi-square or Fisher's exact tests. Multivariate logistic regression analysis was performed with bullous pemphigoid as the dependent variable, and age, gender, racial groups, functional status, neuro-psychiatric medications (such as anti-Parkinsonian, antiepileptic, antidepressant and antipsychotic drugs), ischemic heart disease, diabetes mellitus and internal malignancies as the independent variables. Multicollinearity between the independent variables was assessed using the variation inflation factor.

The Statistical Package for Social Sciences (IBM SPSS Statistics for Windows, Version 22.0. Armonk, NY: IBM Corp.) was utilized for the analysis of the above-mentioned variables to evaluate statistical significance. Odds ratio, 95% confidence interval and P values were calculated to test the null hypotheses of the association between bullous pemphigoid with a history of neurological diseases. A two-sided P< 0.05 was considered statistically significant. The study was approved by our institution's Ethics Review Board.

A total of 3015 inpatients were referred to the dermatology service during the study period. of which 103 cases of bullous pemphigoid and they 103 age and sex-matched controls were included in the study. The demographic characteristics and comorbidities of cases and controls are shown in [Table - 1] and [Table - 2]. Their mean age was 78.2 ± 11.4 years, and there was a slight female predominance of 51.0%. The majority of the patients were Chinese (84.0%), followed by Indians (4.4%). While most patients (35%) were functionally independent, a significant proportion (28.6%) of the patients was bed-bound. Bullous pemphigoid patients were about five times more likely to be bed-bound compared to controls (odds ratio: 5.26; 95% confidence interval: 2.49–11.15; P< 0.001). Eighty three (36%) patients had diabetes mellitus, 40 (22%) had a history of ischemic heart disease while 17 (16.5%) had a history of internal malignancies. Mean age, gender, race, risk of ischemic heart disease, diabetes mellitus and malignancies were similar between the two groups. 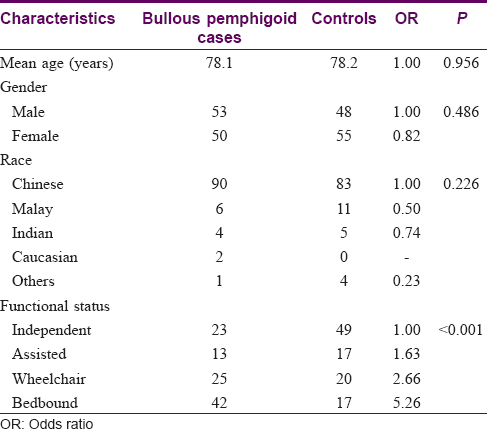 Table 1: Comparison of characteristics between bullous pemphigoid cases and controls 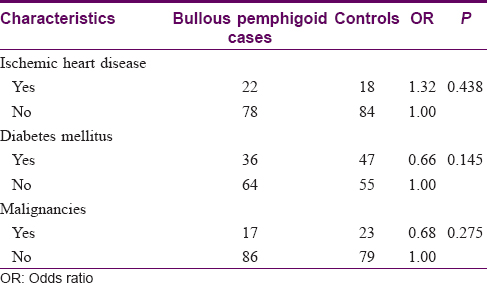 Table 2: Distribution of co-morbidities among bullous pemphigoid cases and controls

After adjusting for age, gender, race, functional status and any prescribed relevant neurological medications, there was a statistically significant increase in risk only for neurological diseases as a whole and dementia. Among those diagnosed with dementia, 10 (29.7%) had vascular dementia, 2 (5.4%) had mixed dementia and 25 (64.8%) had Alzheimer's dementia. The adjusted risks of Parkinson disease and psychiatric disorders remained higher among bullous pemphigoid patients, but these were not statistically significant. In the multivariate logistic regression model, the risks of being bed-bound among patients with bullous pemphigoid remained significantly higher compared to controls (odds ratio: 6.02; 95% confidence interval: 2.33–15.60; P< 0.001). Sensitivity analysis using different logistic regression analysis models yielded similar results. There was no evidence of mutli-collinearity between the independent variables in the models.

Some observational studies have evaluated physical trauma, decubital lesions or paralysis as risk factors for the onset of bullous pemphigoid.[3],[4],[5],[21],[22] The results were however, not conclusive. A hypothesis is that damage to the subepidermis from chronic pressure and subsequent antigen exposure can lead to an immune reaction triggering the onset of bullous pemphigoid.[20] Our study has similarly found an increasing level of functional dependency in bullous pemphigoid cases compared to controls [Table - 1]; however, this may be secondary to the increased prevalence of neurological diseases among the cases.

Bullous pemphigoid not uncommonly presents first with pruritus or non-specific erythematous patches and urticarial lesions in the early stages, while tense blisters develop weeks to months later.[23],[24],[25],[26] In a Swiss population study, 20% of 160 patients diagnosed with bullous pemphigoid did not have any primary skin lesions.[9] This implies that the diagnosis of bullous pemphigoid may often be missed in the early stages, during which treatment could have significantly reduced the morbidity of the disease. From our study's results, we opine that when patients present with early BP, during which the clinical signs are not uncommonly non-specific, the presence of neurological diseases as a risk factor serve to increase physicians' index of suspicion for the disease and closer monitoring for the evolution of the rashes into blisters can be instituted. Early intervention and treatment of bullous pemphigoid may significantly reduce the morbidity associated with the disease.

This is a matched case–control study with respect to age and gender with a logistical regression model being used to adjust for multiple confounding factors. However, there are some limitations in this study. There could be potential referral and selection bias since our study population consisted of inpatients in a general hospital. The control population may have a higher prevalence of neurological diseases or other comorbidities, and this could have a bias toward the null. While the diagnoses of bullous pemphigoid among our cases were made with typical clinical features assessed by dermatologists and further confirmed by histology and direct immunofluorescence findings, the diagnoses of neurological disease were made from medical records based on diagnosis codes and typical neurological medications. This could have led to misclassification. Our study did not have adequate numbers to evaluate the effect of some specific medications such as spironolactone as their chronic use has previously been reported to be associated with bullous pemphigoid.[22]

We found an association between the occurrence of bullous pemphigoid and antecedent neurological diseases, specifically dementia. When elderly patients present with nonspecific dermatological signs suspicious of early bullous pemphigoid, a history of neurological disease raises the index of suspicion, and serological tests can be performed to enable expedient diagnosis of the disease.