Calciphylaxis is a rare life-threatening syndrome characterized by progressive and painful skin ulcerations associated with calcification of medium-size and small cutaneous arteries. The term calciphylaxis was coined in 1962 by Selye.[1] It is also known as calcific uremic arteriopathy and “vascular calcification–cutaneous necrosis syndrome.”[2]

It mostly affects end-stage renal disease patients on dialysis. Incidence is in the range of 1:1000 to 1:1500 cases in patients on chronic renal replacement therapy.[3] Exceptions have been reported in patients with normal renal function and in association with chronic inflammatory disease, malignancy or primary hyperparathyroidism. Secondary infection of necrotic skin lesions and subsequent sepsis can cause high mortality of up to 80%.

A 24-year-old female with no known comorbidities presented with 10 days history of extreme pain on outer aspect of both thighs. Patient was unable to walk due to severe pain in the thighs. There was no history of loss of appetite, nausea, vomiting, constipation, abdominal pain, increased thirst, frequent urination, fatigue, weakness, muscle pain, confusion, disorientation, headache and depression. There was no history of drug intake, calcium or vitamin D supplementation in the past. The patient denied consuming alcohol or smoking and did not give any history suggestive of a connective tissue disease. On examination, our patient was thin, had low-grade fever, tachycardia and pallor. Dermatological examination revealed irregularly shaped, well-defined, indurated erythematous, and tender plaques measuring approximately 8 cm × 5 cm over lateral aspect of upper one-third of both thighs. These lesions increased in size and number over a span of 1 week [Figure - 1]a.

Investigations revealed anemia, leukocytosis, elevated serum calcium, alkaline phosphatase, parathyroid hormone, serum cortisol, serum prolactin and insufficient vitamin D3 as depicted serially in [Table - 1]. Technetium (99m Tc) SestaMIBI (sestamethoxyisobutylisonitrile) scan revealed left inferior parathyroid adenoma. A possibility of multiple endocrine neoplasia was kept but magnetic resonance imaging of brain was deferred due to nonavailability of this facility at our center at that time. The same was done later during follow-up and was found to be normal. Histopathology of lesion showed ulcerated epidermis with calcification and intimal hyperplasia in the small-sized cutaneous arterioles in hematoxylin and eosin stain. Calcium was demonstrated in cutaneous arteriole by Von Kossa stain [Figure - 2]. 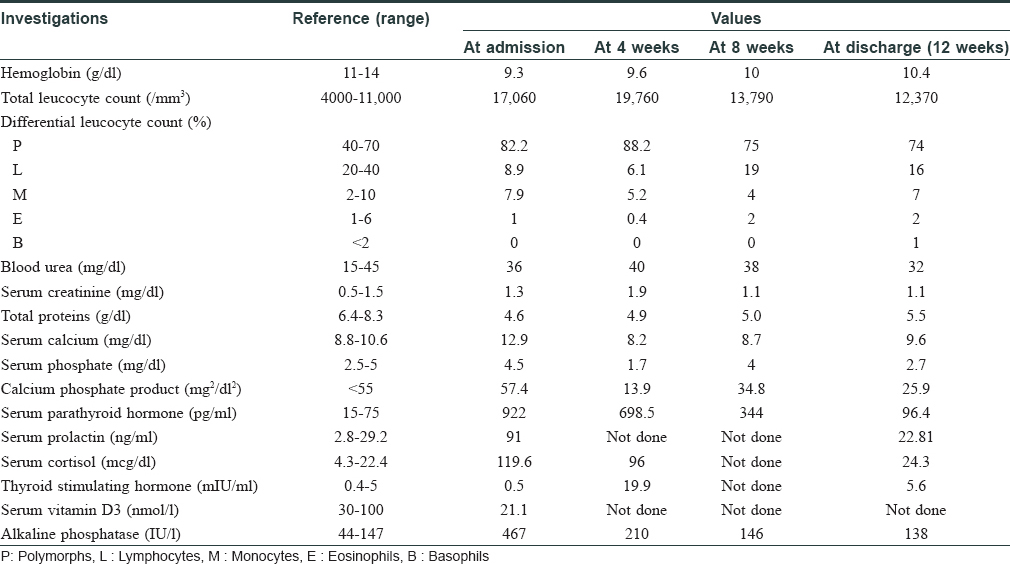 A diagnosis of calciphylaxis with hyperparathyroidism was made clinically and histopathologically. The patient was given symptomatic and supportive care initially in the form of intravenous fluids, normal saline at the rate of 100 ml/h and intravenous antibiotics – linezolid 600 mg 12 hourly, piperacillin with tazobactam 2.25 g 8 hourly, intravenous pantoprazole 40 mg 12 hourly along with high protein diet and hematinics. However, serum calcium continued to rise (max 15.8 mg/dl) and the patient also developed facial edema. Elective parathyroidectomy was undertaken at this point (2 weeks from admission) to stabilize calcium levels. Intravenous frusemide 40 mg 12 hourly was added. Postoperative period showed a decline in serum calcium levels and increased levels of thyroid stimulating hormone (89.91 IU/ml). Resection of a small portion of thyroid gland was done during parathyroidectomy due to its nonspecific location and this led to iatrogenic hypothyroidism. Thyroxine 100 μg per day was initiated to treat the iatrogenic hypothyroidism. The skin lesions had evolved into hemorrhagic infarcts and necrotic eschar with involvement of bilateral gluteal regions [Figure - 1]b. A wide local excision and wound debridement followed by vacuum-assisted closure dressing was undertaken after 2 weeks. Intravenous antibiotics were changed to meropenem 1 g 12 hourly; and clindamycin 600 mg 12 hourly and intravenous tramadol 50 mg 12 hourly were also added to the treatment regime. One week after wound debridement, hyperbaric oxygen therapy was introduced at 2.5 atmospheric pressure absolute for 90 min, 5 days a week for three consecutive weeks. It led to marked improvement in the size of lesions [Figure - 1]c, pain and general condition of patient along with improvement in lab parameters. Elevated levels of prolactin and cortisol can occur during acute stress response of body and they gradually normalize as the crisis settles, as was seen in this case. Healthy granulation tissue at 4 weeks from initiation of hyperbaric oxygen therapy enabled primary suturing of lesions. The patient is presently on regular follow-up [Figure - 1]d and doing well. Calciphylaxis is described as a systemic medial calcification of the arteries and occurs often in patients with end-stage renal disease or after kidney transplantation. Other risk factors include dialysis, hyperphosphatemia, hypercalcemia, hyperparathyroidism, diabetes mellitus and female gender. However, none of them are individually responsible for causing calciphylaxis.[4]

The pathogenesis of calciphylaxis is poorly understood.[5] It frequently develops in the lower extremities and is often misdiagnosed as vasculitis, diabetic ulceration or cholesterol emboli. Ulceration is rapid and covers large skin areas as in our case, accompanied by impaired wound healing. Histopathologically, there is pathognomonic arteriolar calcification confirmed by staining based on silver nitrate.[3]

Management is challenging and involves multidisciplinary approach with special emphasis on wound care, as was done in our case with the help of vacuum-assisted closure dressing. Negative pressure dressing with surgical excision and conservative treatment have been previously utilized successfully.[6]

Data are also available on the use of agents such as sodium thiosulfate and bisphosphonates in treatment of calciphylaxis.[7],[8] A noncalcium, nonaluminium phosphate binder can be used as an adjunctive therapy. Systemic corticosteroids have also been used, but may cause calcium and phosphorous abnormalities.[9] Cinacalcet is used to lower parathyroid levels as well as improve calcium–phosphorus homeostasis.[10]

We did not use any of these in this case, due to improvement noticed after the surgical excision and the wound care measures in the form of vacuum-assisted closure dressing and hyperbaric oxygen therapy.

Hyperbaric oxygen therapy is a newer therapeutic modality. The patient breathes 100% oxygen at a pressure higher than ambient atmospheric pressure inside a sealed treatment chamber. The possible mechanism of action is that it increases the amount of oxygen in diseased tissue, thereby promoting wound healing. Hyperbaric oxygen at 2.5 atmospheric pressure absolute has been used for 90 min, 5 days per week for 5–7 consecutive weeks with benefit in reported cases of calciphylaxis.[11],[12],[13] The role of parathyroidectomy is considered controversial, but has been found to be helpful in patients with primary hyperparathyroidism [14] as in our case.

The authors certify that they have obtained all appropriate patient consent forms. In the form, the patient has given her consent for the images and other clinical information to be reported in the journal. The patient understands that name and initials will not be published and due efforts will be made to conceal identity, but anonymity cannot be guaranteed.