Carbamazepine - The commonest cause of toxic epidermal necrolysis and Stevens-Johnson syndrome: A study of 7 years

Background : Toxic epidermal necrolysis (TEN) and Stevens-Johnson syndrome (SJS) are a group of severe life threatening drug reactions. The drugs commonly implicated as the cause of these drug reactions vary depending on host factors and the prescription pattern of drugs in that particular area. Aim : The aim of the study was to find the drugs implicated as the cause of SJS/TEN in the patients admitted in the dermatology ward at the Medical College, Thrissur and to find the clinical outcome. Methods : It was a retrospective study of 7 years from 1997 to 2004. The case records of all patients with a clinical diagnosis of TEN or SJS were studied in detail regarding the drugs implicated as the cause, the management and the clinical outcome. Results : During the study period, 41 patients in the age group ranging from 12 to 72 years were treated as inpatients, of which 20 were males and 21 were females. The commonest drug implicated as the cause of SJS/TEN was carbamazepine (44%). The indication for carbamazepine was control of pain in more than 50% of the cases. Presence of a major systemic disease before the onset of SJS/TEN was associated with a bad prognosis. Conclusion : The increased use of carbamazepine, especially for control of pain, may be the reason for the increased incidence of SJS/TEN due to the same drug. Awareness about the drugs implicated in life threatening drug reactions will help physicians in preventing them by judicious use of the drugs. 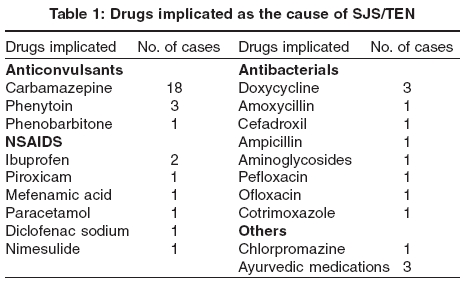 Toxic epidermal necrolysis and Stevens-Johnson syndrome are severe, episodic, acute mucocutaneous reactions that are most often elicited by drugs and occasionally by infections. They are now considered to be differing only in the extent of body surface area involved.[1] The drugs commonly implicated as the cause of SJS/TEN are anticonvulsants, sulfonamides, non-steroidal anti-inflammatory drugs and antibiotics. [2],[3],[4],The drugs implicated as the cause of drug reactions in a particular area will vary according to the prescription pattern of medications. A retrospective study was planned to find the common drugs implicated as the cause of SJS/TEN in our hospital and to evaluate the clinical outcome.

A retrospective study of all inpatients diagnosed as TEN or SJS was done for a period of 7 years [June 1997 to May 2004] in the Department of Dermatology and Venereology, Medical College, Thrissur. The diagnosis of TEN or SJS was based on clinical features such as acute onset of rapidly expanding erythematous macules that coalesced to form dusky erythema, necrosis and detachment of epidermis along with erythema, erosions and crusting of more than one mucosal surface.[1] Case records of all inpatients diagnosed as SJS/TEN were studied in detail regarding the drugs implicated as the cause of the reaction, their course in the hospital, the management and the clinical outcome. For the purpose of this study, no attempt at differentiation was made between the cases of SJS and TEN .

Forty-one patients, 20 males and 21 females, with a diagnosis of SJS/TEN were treated as inpatients in the Department of Dermatology and Venereology, Medical College, Thrissur from June 1997 to May 2004. The youngest patient was 12 years old and the oldest one was aged 72 years (mean age 38 years). The majority of patients (28/41; 68%) were in the age group of 20 to 50 years. There were five patients aged less than 20 years and eight patients aged above 50 years.

In 22 [53%] patients, anticonvulsants were implicated as the cause of SJS/TEN, most commonly (18/22) carbamazepine. Carbamazepine was also the most common drug implicated (44% of the total number of cases). The other classes of drugs implicated were NSAIDS, antibiotics, antibacterials and Ayurvedic medications [Table - 1].

In seven patients, carbamazepine was given for seizure disorders, and in the others [11/18], to control pain in conditions such as post-herpetic neuralgia, cervicobrachial neuralgia, vague aches, and pain of the extremities and back without a definite diagnosis. Phenobarbitone and phenytoin were the other anticonvulsants incriminated.

The duration of ingestion of the implicated drug before the onset of symptoms was less than 1 week in 44% of cases, between 1 and 2 weeks in 32% of cases, and between 2 and 3 weeks in the remaining 24% of cases.

Out of the 41 patients, 36 were treated with systemic dexamethasone 4-12 mg/day in divided doses parenterally within 2- 3 days of onset of symptoms for a period of two weeks in tapering doses, along with an antibiotic, generally erythromycin. The dosage varied empirically. The cause for variation in the dose could not be assessed, as this was a retrospective study. All patients were given intravenous fluids and other supportive medications.

Thirty three [81%] patients recovered completely without any major sequelae, five [12%] died, and three were discharged at request within 1 to 2 days of admission and were lost for follow up. None of the patients who recovered had any major systemic disease before the onset of SJS/TEN, but three of the five patients who died had a serious underlying systemic disease such as non-Hodgkin′s lymphoma, head injury with coma, and chronic alcoholism with liver damage. Three patients died within 1 day of hospitalization and the remaining two patients within 5 days. The cause of death was either acute respiratory distress syndrome or septicemia. The drugs implicated in these patients were anticonvulsants (carbamazepine, phenytion and phenobarbitone) in four cases and amoxycillin, NSAIDs or chlorpromazine in one case. All the patients who had a complete recovery were hospitalized for 1 to 3 weeks.

As SJS and TEN are now considered as a spectrum of the same disease process, varying only in the area of involvement of skin surface, the two conditions were considered together in this study.[1]

Adverse reactions to drugs are reported to increase with age.[5] Kaur et al recorded a peak incidence of TEN in the fourth to sixth decades.[6] In our study, the majority of patients (70.7%) with SJS/TEN were aged between 20 and 50 years. The increased incidence of adverse drug reactions in the elderly is considered to be due to increased use of medications and altered drug metabolism.[7] However, in contrast, as seen in this study, the occurrence of SJS/TEN is reduced in the elderly, probably due to reduced immunologic competence in the elderly.[7] The absence of children in our study may be because they were admitted and treated in the paediatric ward.

SJS/TEN is reported to affect females more frequently than males,[8] but an Indian study showed a slight male preponderance.[6] We found males and females to be affected almost equally.

Drugs are considered to be the commonest cause of SJS/TEN. SJS/TEN is considered as a cytotoxic immune reaction causing destruction of keratinocytes expressing drug related antigens. TNF-a derived from macrophages and keratinocytes may play an important role in the pathogenesis by inducing apoptosis of epidermal cells or by attracting cytotoxic effector cells or both. Drug metabolites such as hydroxylamines and arene oxides derived from sulfonamides and aromatic anticonvulsants respectively, bind to cell constituents if they are not rapidly detoxified by epoxide hydrolase. These metabolites act as haptens and render the keratinocytes antigenic by binding to them. A defect in the detoxification system may be the cause of the drug eruption.[1]

In our study, the most common [53%] group of drugs implicated as the cause of SJS/TEN was anticonvulsants. Among anticonvulsants, the majority of cases [81%] were due to carbamazepine. In a study conducted in France during 1981-1985, the majority of cases of TEN were due to NSAIDS [33.3%] and antibacterials [29%], mainly sulfonamides; anticonvulsants were implicated in 14.5% of cases and the majority of cases were due to phenobarbitone.[2] In a study of erythema multiforme [EM], Chan et al reported antibacterials such as aminopenicillins, sulfamethoxazole and trimethoprim as the commonest causative drugs for SJS and TEN.[3] Nanda and Kaur observed that developing countries have a higher incidence of TEN due to antituberculous drugs, thiacetazone and isoniazid being the most frequent offenders.[9] In a study from Malaysia, Kamaliah et al have reported carbamazepine as the commonest cause of EM, SJS and TEN.[4] Roujeau has reported that the relative risk for anticonvulsants such as phenytoin, phenobarbitone and carbamazepine to cause SJS/TEN is 11 to 15.[10] Carbamazepine caused SJS/TEN in a frequency of 14 per 100000 users.[11] In a prospective study conducted in 335 children on treatment with carbamazepine, the incidence of TEN was 0.6%.[12] In our study, sulfonamide [cotrimoxazole] was implicated in only one case and NSAIDs in 16% of cases. Antituberculous drugs were not implicated. The variation in the pattern of drugs inducing SJS/TEN may be due to differences in the prescription pattern and in the genetic make up in different populations.

In 60% of patients who developed SJS/TEN in our study, the indication for carbamazepine was control of pain. Apart from control of seizures, carbamazepine is being increasingly prescribed for control of pain and this may be a reason for the increased incidence of SJS/TEN due to carbamazepine in our study. Decreased use of sulfonamides and thiacetazone due to the advent of newer antibiotics and antituberculous drugs may be the reason for the reduced incidence of SJS/TEN due to these drugs. Ayurvedic drugs were implicated in three patients [7.5%]. There are other reports of herbal medicines causing SJS/TEN.[13]

The incubation period was less than 3 weeks in all our patients. This is in conformity with previous reports.[8] Ninety percent of our patients were treated with systemic steroids along with antibiotics and supportive measures. Death occurred in 12% of patients. The reported mortality rates for SJS and TEN vary from 5% to 70%.[14],[15],[16] Three out of the five patients who died had a major underlying systemic disease such as lymphoma and head injury with coma before the onset of TEN. The absence of major systemic illness in patients who completely recovered may indicate that the presence of a severe systemic illness before the onset of SJS/TEN is a bad prognostic factor.

Mucosal scarring, especially in the eyes, frequently follows SJS/TEN, but this was not seen in any of our patients, probably due to early control of inflammation by treatment with systemic steroids and appropriate topical care of the eroded areas. Complete recovery of patients not having any major underlying systemic disease also indicates the effectiveness of early treatment with systemic steroids in SJS/TEN.

To conclude, we found that carbamazepine was the most commonly implicated drug responsible for SJS/TEN. The increased number of prescriptions of carbamazepine for the control of pain may be the reason for the increased frequency of SJS/TEN due to carbamazepine. Prospective studies to determine the incidence of SJS/TEN in patients on treatment with carbamazepine may help our understanding the risk associated with its use. Awareness about drugs causing serious drug reactions such as SJS/TEN will help doctors prevent such reactions by judicious use of drugs and manage them with the minimum mortality and morbidity.