Drug reactions in dermatology are an enigma and the tough part is to identify the culprit drug in the current era of poly-pharmacy. We report an interesting case of oral cetirizine-induced urticarial eruption in a patient complaining of intolerance to multiple drugs.

A 39-year-old woman complainted of evanescent skin eruptions following the intake of several oral medications. During each episode, the patient had taken drugs and developed a generalized eruption of itchy wheals within 8-10 h of drug intake, not associated with angioedema. She had six such episodes over the previous 8 months. For the first episode, she was treated with intramuscular injections of chlorpheniramine maleate and dexamethasone with which the rash subsided in 2-3 h. On other occasions, the rash subsided spontaneously within 3-5 h. The list of drugs that she had received prior to the onset of symptoms on various occasions included cetirizine, levocetirizine, hydroxyzine, fexofenadine, ebastine, cyproheptadine, paracetamol, omeprazole, esomeprazole, cefixime, ivermectin, escitalopram and clonazepam. Consequently, the patient had developed drug phobia and was moderately distressed. There was no history of spontaneous urticaria or angioedema, systemic symptoms, atopy or any other drug allergies. Clinical examination was within normal limits. Her baseline complete blood counts, liver and kidney function tests, antinuclear antibody level, urine and stool examination were all within normal limits. Her chest X-ray and abdomino-pelvic ultrasonography did not reveal any abnormality.

We admitted her to the inpatient department and carried out a supervised, patient blinded, placebo-controlled oral drug provocation test by standard methods [Table - 1]. [1] Four hours after taking a tablet of cetirizine 10 mg, she developed generalized discrete to confluent wheals (associated with pruritus but not angioedema) which subsided spontaneously after 7-8 h [Figure - 1] and [Figure - 2]. She developed a few wheals after taking a tablet of diclofenac, 25 mg and mild pruritus following intake of a tablet of fexofenadine, 120 mg [Table - 1]. Oral levocetirizine provocation could not be performed as she declined any further oral drug provocation. Intradermal testing done with injections pheniramine maleate (22.75 mg/ml) and hydroxyzine hydrochloride (25 mg/ml) was negative. An injectable formulation of cetirizine was not available and was hence not tested. 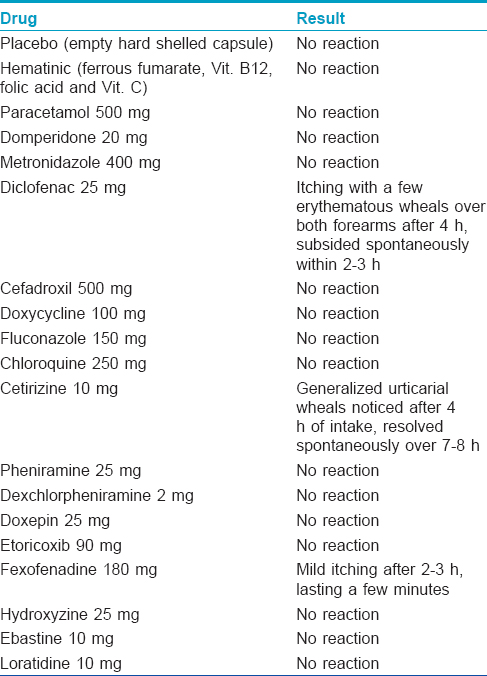 Table 1: Schedule of oral drug provocation testing and the results

The patient was relieved of her drug phobia when the results were conveyed to her. On repeat interviewing, it was revealed that all her 6 episodes of urticaria had been preceded by cetirizine intake and fexofenadine had been taken prior to one of the episodes. Cetirizine had been taken (in combination with several drugs listed above) twice for itching, twice for fever with exanthemata, once for urinary tract infection and genital burning, and once for abdominal pain. Diclofenac had not been taken by the patient in the past 8 months. She was advised to avoid cetirizine in the future and to take diclofenac and fexofenadine with caution, if required. Till date, over an 18-month follow up, the patient has been avoiding cetirizine and levocetirizine, has taken fexofenadine on and off for non-dermatological indications and does not report any recurrence of urticarial lesions. She also remains free of any drug phobia.

Multiple drug hypersensitivity or intolerance syndrome was initially defined as intolerance to two or more chemically unrelated, mainly antibiotic drugs [2] but Schiavino et al. defined it as intolerance to 3 or more unrelated medications. [3] It often culminates in patients getting anxious and being wary of medications. Ramam et al. conducted oral drug provocation testing on self-reported multiple drug reactors and did not find any patient qualifying as a multiple drug reactor. They concluded that such patients possibly suffer from drug phobia rather than true allergies. [4]

Cetirizine is considered safe and commonly used as a first line drug in many allergic disorders including urticarias, but quite ironically it has been documented to cause or aggravate urticaria. [5],[6],[7],[8] Although the exact mechanism behind cetirizine-induced urticaria is unknown, suggested mechanisms include a non-immunological response, non-specific mast cell or alternate complement pathway activation. [5],[6],[7] Chang et al. found urticarial reactions to both cetirizine and hydroxyzine but not to levocetirizine. A probable role of the dextrocetirizine enantiomer in causing urticaria and the structural similarity between cetirizine and hydroxyzine were suggested as explanations. [7] However, hydroxyzine did not produce urticaria in our case, which may be due to the relatively stable hydroxyl group on hydroxyzine (vis-a-vis the acidic carboxyl group on cetirizine).

Non-steroidal anti-inflammatory drugs non-specifically increase histamine release from basophils and are known to aggravate or cause urticaria by decreasing prostaglandin E 2 (PGE 2) levels. [9] This may have been the reason for positive provocation to diclofenac in our patient. Since it was not historically relevant, our patient could not be labeled as a case of multiple drug intolerance syndrome even though she developed urticaria to more than 1 drug during the testing process.

We therefore conclude that drug provocation testing may be the only way to resolve the issue of suspected multi-drug allergy and that cetirizine, among other H1 antihistaminic drugs, should also be kept in the list of suspected drugs whenever relevant.