Background: Approximately 18% of infantile hemangiomas are segmental. These are larger than other infantile hemangiomas, associated with higher rate of complications and developmental anomalies, and often require treatment. They follow nonrandom patterns on the head and neck as well as extremities which are probably related to embryologic development.
Aims: Our study aimed to describe segmental patterns of infantile hemangiomas in Indian children, with associated anatomical abnormalities if any.
Methods: Over a 9-year period, 59 infants presenting with lesions classified as segmental infantile hemangiomas were evaluated and analyzed. Associated developmental anomalies were assessed and recorded. In addition, patterns of “indeterminate” infantile hemangiomas in another 43 patients were analyzed.
Results: There were 14 male and 45 female infants with an average birth weight of 2.7 ± 0.726 kg in our study; the average age at onset was 1 ± 1.25 months with most (50.8%) lesions localized to the head and neck area. Mapping of lesions showed that the most common facial segments involved were mandibular (33%) and maxillary (30%). However, additional repetitive patterns not previously described (such as an “inverted comma” pattern on the chest, bilateral neck involvement and unilateral labium involvement) were seen in our patients. Common local complications were ulceration (27%), amblyopia and nasal obstruction (3% each). Mapping of the additional 43 patients with indeterminate infantile hemangiomas also showed repetitive though incomplete patterns.
Limitations: Relatively small number of patients.
Conclusion: Segmental infantile hemangiomas present as large, distinctively patterned lesions, even on the trunk and genitalia. These patterns are probably based on embryologic developmental patterns. In addition, indeterminate lesions also showed distinctive repetitive patterns. Our study suggests that additional segments may need to be defined, particularly on the trunk and genital area.

Infantile hemangiomas are the most common vascular tumors in infants.[1] They are hypothesized to originate from dysregulated stem cells arrested at an immature stage, prompting expression of genes for vasculogenesis and tumorigenesis.[2] The trigger could be localized tissue hypoxia leading to “compensatory” overgrowth after birth.[3],[4] Infantile hemangiomas evolve predictably with sequential proliferation and involution. Most require no treatment, though some lesions, impairing vital functions or causing significant disfigurement, need therapy. Infantile hemangiomas are classified on the basis of depth of involvement (superficial, deep, mixed) or morphology (localized, multifocal, segmental or indeterminate).[5],[6]

Segmental infantile hemangiomas are plaque-type lesions involving a defined cutaneous segment. They constitute almost 18% of infantile hemangioma lesions, are usually large, have a higher rate of associated developmental anomalies and require treatment more frequently.[7],[8] There is a rising interest in this subset because of the need for prompt management.

This was a retrospective case record analysis of infants with segmental infantile hemangiomas seen over a 9-year period. Case records of hemangiomas along with photographic data at presentation were analyzed. Lesions were classified as segmental, focal, multifocal or indeterminate [Figure - 1] by two dermatologists independently. Focal hemangiomas were defined as lesions which were localized without any apparent pattern [Figure - 1]a. Multifocal hemangiomas were defined as more than five lesions in a child.[7],[11] Those hemangiomas whose distribution corresponded to recognizable developmental segments were classified as segmental infantile hemangiomas [Figure - 1]b. Hemangiomas which could not be classified convincingly as either focal or segmental were deemed indeterminate [Figure - 1]c. Hemangioma morphology, local complications, pertinent history and associated developmental anomalies were noted. In case of head and neck segmental infantile hemangiomas, ophthalmological and otorhinolaryngological assessments were also done. Imaging studies viz. contrast-enhanced computed tomography of the brain and echocardiography were performed in those with a suspicion of associated developmental abnormalities, especially the large segmental hemangiomas of the face (fronto-temporal and mandibular) as they carry a high risk of associated anomalies. Ultrasonography was done for cases with a suspected deeper component, suggested by a bluish hue or swelling underneath the hemangioma. 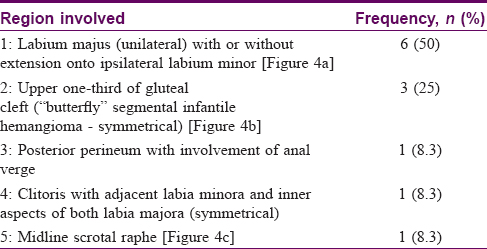 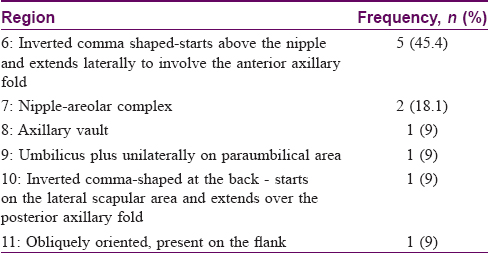 Indeterminate infantile hemangiomas were diagnosed in 43 infants. Of these, 25.5% had more than one lesion (nine infants having two lesions each and two infants having three lesions each) yielding a total of 56 hemangiomas in these patients. The head and neck region was the commonest site involved in 28 (50%) lesions, followed by 18 (32.1%) upper limb lesions, 6 (10.7%) lower limb lesions and 4 (7.1%) trunk lesions. Ulceration occurred in 20 (35.7%) indeterminate lesions. The body distribution of indeterminate segmental infantile hemangiomas is pictorially represented and detailed in [Table - 4]. Several truncal and upper limb indeterminate lesions had a mushroom-like globular growth (9/56; 16%) and were all ulcerated. 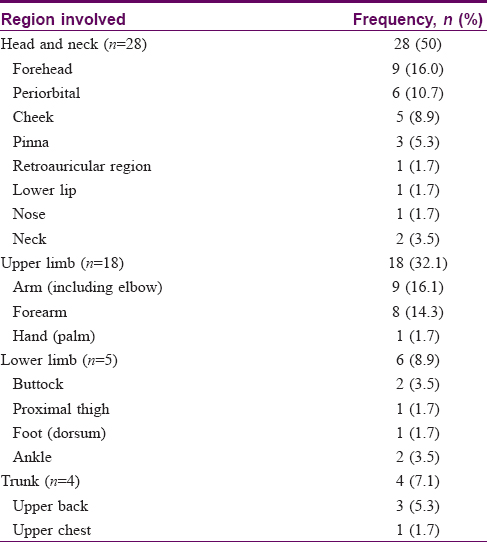 In line with previous reports, the majority of our study population comprised female infants (M/F ratio of 1:3.2), and the head and neck region was the most common site affected (50.8%).[1],[11],[12],[13],[14] However, we found around half of the segmental infantile hemangiomas in areas other than the head and neck.

Clinical patterns for segmental infantile hemangiomas of the anogenital area have not been delineated earlier. We observed unilateral labial involvement (50%) [Figure - 4]a; or involvement of the scrotum [Figure - 4]b commonly. The next most common pattern was a butterfly-shaped, bilaterally symmetrical lesion on the upper third of the gluteal cleft (25%) [Figure - 4]c. Embryological development of the external genitalia could explain this. An indifferent external genital organ developing from the cloacal folds is discernible at the third week; from this, the genital tubercle, urethral folds and anal folds are formed. A second pair of swellings (genital folds) gives rise to the labia majora in the female and scrotum in males (the latter by fusion). Development is completed by the sixth week, suggesting that unilateral lesions may be due to a hypoxic insult between 3 and 6 weeks of intrauterine life.[16]

We also observed distinctive patterns in truncal segmental infantile hemangiomas, the commonest being an inverted comma-like lesion. These involved the upper chest (sparing the nipple) extending upwards and laterally up to the anterior axillary fold. Fetal upper limb development begins on the 24th day of life, with small bulges appearing at the lower cervical region. By day 33, the rudimentary shoulder, arm, forearm and hand plate can be distinguished.[17] The “inverted comma” segmental infantile hemangioma (extending from upper chest onto the anterior part of shoulder) hints at a hypoxic event probably around the time of appearance of upper limb buds.

Superficial segmental infantile hemangiomas comprised the majority (74.5%); the remaining were of the mixed type. This was similar to earlier reports, where the superficial type contributed to >50% of infantile hemangiomas, though some reports have found the mixed subtype to be most common.[7],[18] As in our study, ulceration is by far the most commonly reported complication in literature.[14],[15],[18],[19] In contrast to the present study, parotid gland involvement as high as 39% was recorded by Bradling-Bennett et al. This large difference is probably attributable to the higher number of deep infantile hemangiomas included in their study.[15] Our findings suggest that although segmental infantile hemangiomas can indicate associated underlying abnormalities, only a minority are found to have associated anomalies on investigation.

Indeterminate infantile hemangiomas are considered an incomplete or abortive form of segmental infantile hemangiomas. This was partially supported by our study findings as these too tended to follow repetitive patterns. Further mapping may help gain clarity and possibly better classify them as segmental lesions.

Genital and truncal segmental infantile hemangiomas were found to be next in order of frequency to head and neck lesions. Novel repetitive patterns such as a truncal “inverted comma” pattern and unilateral genital lesions should be looked for. Even indeterminate lesions share patterns similar to segmental lesions. Future evaluation of more patients could refine classification, perhaps offering further insights into hemangioma pathogenesis.

The authors certify that they have obtained all appropriate patient consent forms. In the form, the patients have given their consent for their images and other clinical information to be reported in the journal. The patients understand that names and initials will not be published and due efforts will be made to conceal identity, but anonymity cannot be guaranteed.