Cholinergic urticaria is a relatively rare variant of physical urticaria that is characterized by pinpoint highly pruritic wheals caused by an increase in core body temperature.[1] Despite being first described many years ago, its epidemiology and various clinical characteristics remain elusive. A relative scarcity of reports regarding cholinergic urticaria from India intrigued us to evaluate its prevalence and clinical characteristics among our urticaria patients.

We conducted a retrospective study in the urticaria clinic of the Department of Dermatology of Postgraduate Institute of Medical Education and Research, Chandigarh, India, which is a tertiary care referral center. A retrospective analysis of files of all urticaria patients seen between January 2011 and December 2015 was done and all patients of cholinergic urticaria were shortlisted. Patients with a history suggestive of inducible urticaria due to any cause other than cholinergic urticaria and those with chronic spontaneous urticaria were excluded from the study. Selected patients were weaned off antihistamines for at least 2 weeks before performing diagnostic tests. The diagnosis of cholinergic urticaria was confirmed by asking the patients to climb 48 stairs or walk briskly around the outpatient corridor until the patient started sweating. The disease severity was classified as mild (urticaria episodes occurring less than once daily, with no effect on quality of life), moderate (daily occurrence of wheals or associated depression affecting quality of life) and severe (anaphylaxis and severe depression). A total of 1728 urticaria patients were screened of whom only 30 (1.7%) had cholinergic urticaria, among which, 23 were males with a male to female ratio (M:F) of 3.3:1. The mean age of males was 19 years and that of females was 36.25 years. Disease onset in most patients was during the second decade of life [Figure - 1]. Nearly equal number of patients had mild (n = 14) and moderately severe disease (n = 16), while none of the patients had a severe disease with anaphylaxis. Various clinical characteristics of the study cohort are summarized in [Table - 1]. 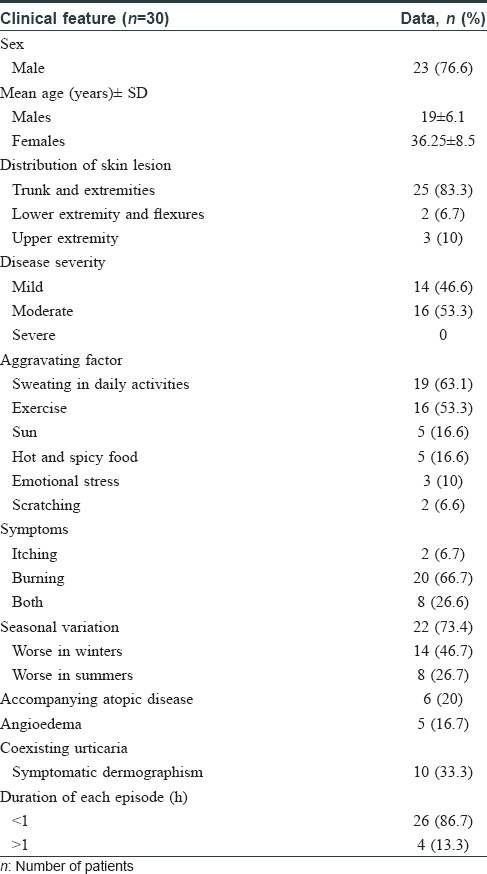 Follow-up of patients in our study ranged between 3 and 5 years. Twenty-six (86.6%) patients on desloratadine were lesion free by 3 months of regular treatment and later required only occasional doses (once in a fortnight to once a month) along with avoidance of excessive sweating. The remaining four patients required more frequent doses of antihistamines. No particular risk factor could be identified in such patients.

The characteristic small and pruritic wheals in cholinergic urticaria appear following any stimulus that induces sweating, including elevation of body temperature, physical exercise, intake of spicy food and emotional stress. Cholinergic urticaria has been found to account for 30% of inducible urticaria and around 5%–7% of total urticaria cases in previous srudies.[2] However, in our study, its prevalence was only 1.7%, similar to an Indian study by Godse et al., who also found a lower prevalence of 4.16%.[3] Majority (9/30; 47%) of our patients were in their second decade of life or had an onset of disease in the second decade (13;68.7%). This is in concordance with previous reports, wherein a prevalence of 11% was noted in young adults and adolescents with up to 80% patients reporting onset of disease in adolescence.[4],[5] The mean duration of illness in our patients was 46 months, similar to that observed by Kim et al.[5] and Silpa-archa et al.[6] who reported that half of their patients achieved remission by 5 years from the onset of illness. However, one of our patients had cholinergic urticaria for 15 years which is exceptional.

As in previous studies, we observed seasonal variation in symptomatology in 22 (73.4%) cases.[5],[7] A previous study by Ramam et al., had also found symptoms limited to winter months (from October to January) in 62.5% patients, with 12.5% patients having increased frequency and severity of episodes during winters.[7] In our study, coexistent atopy was found in six (20%) patients only. Although some earlier studies mention a higher prevalence of atopy in such patients, it has been speculated that this higher association could be misleading as symptoms of itching and stinging experienced by atopics on exposure to hot water baths could have been misinterpreted as cholinergic urticaria. Thus, this association needs further confirmation. [Table - 2] summarizes the results of various studies on cholinergic urticaria.

Cholinergic urticaria can be severely disabling at times as most provoking factors are integral to daily activities. Performing appropriate provocation tests to establish its etiology can be greatly rewarding. This study highlights that the prevalence of cholinergic urticaria in India is lesser as compared to western countries. Whether this is due to genetic constitution, environmental factors or less frequent reporting to a health-care setup due to easy availability of over-the-counter antihistamines needs further studies. Furthermore, it remains to be studied if desloratadine has an additional influence on sweating or sweat sensitivity that could probably explain its better efficacy in controlling cholinergic urticaria.