Background: We are reporting 35 new cases of Chromoblastomycosis from Central Kerala. A majority of the cases from India are reported from the Sub Himalayan belt and South India. The disease scenario in India and abroad is briefly reviewed. Aims: To study chromoblastomycosis in Central Kerala including the demographic and clinico- investigative profile. Methods: This report is a retrospective record analysis of 35 cases of chromoblastomycosis who presented to the Dermatology Outpatient department of our tertiary center from January 2003 to July 2010 after obtaining Institutional Review Board approval. Results: The disease was found to be more common among male agriculturists. The majority of cases were from the central districts of Kerala in and around the Western Ghats. The lower extremity (60%) was more affected with 40% of the subjects remembering a prior history of trauma. Sclerotic bodies were demonstrable in scrapings from black dots in 42.8%. The characteristic mixed mycotic granuloma was demonstrable in 77.1% of cases. The most common species isolated was Fonsecaea pedrosoi. Conclusions: Chromoblastomycosis is very common in Central Kerala. The disease mainly affects male agriculturists especially those employed in rubber plantations. The most common organism is F. pedrosoi.
Keywords: Chromoblastomycosis, Fonsecaea pedrosoi, mixed mycotic granuloma, sclerotic body

Chromoblastomycosis is a chronic fungal infection caused by different species of dematiaceous fungi such as Fonsecaea pedrosoi, Phialophora verrucosa, Fonsecaea compacta, Cladophialophora carrionii and other species. The disease is characterized by the presence of thick walled, brownish, septate sclerotic bodies in the tissues. A majority of cases have been reported from the tropics and subtropics. We herein report 35 cases of chromoblastomycosis from a tertiary care institution in Central Kerala, India.

This report is a retrospective record analysis of 35 cases of chromoblastomycosis who presented to the Dermatology Outpatient department of our tertiary center from January 2003 to July 2010 after obtaining Institutional Review Board approval. A detailed history including demographic data, occupation, and history of trauma were recorded. Cutaneous and systemic examinations were performed and the findings were noted. Microscopic examination of scrapings from the surface black dots was performed using 10% potassium hydroxide. A skin biopsy was taken from the lesions and subjected to histopathologic examination with routine Hematoxylin and Eosin stain. No special stains were used. A separate skin tissue sample was sent for fungal culture using Sabouraud′s dextrose agar and also AFB culture. Other co-morbidities like diabetes mellitus were noted. Our experience with treating 10 of the cases with Saturated Potassium iodide solution is included.

The youngest patient was 25 years of age and the oldest was 69. There were 30 males and 5 females. Twenty-one were employed in various agricultural tasks including rubber tapping. The cases were from central Kerala, majority from our district (28) and the rest from adjoining districts (7). Twenty cases were from the Western Ghats and its premises [Table - 1]. The rest were from the immediate adjoining zones and midlands. Twenty-one cases had lower limb lesions, 11 had upper limb lesions, and the remaining 3 had truncal lesions. Fourteen of them recalled a history of trauma including penetrating injury (4), abrasion (4), laceration (4), and burns (4). Twenty-four were asymptomatic while the remaining 11 experienced symptoms including itching, pain, or both. All the patients presented with plaques of varying morphology with sizes ranging from 12 × 8 cm to 3 × 2 cm [Table - 2]. Extracutaneous involvement was not seen in any of the cases. Scrapings from black dots gave positive results for sclerotic bodies in 15 of the cases. All of the cases were histopathologically proven with the characteristic brownish thick-walled sclerotic bodies being demonstrable in all the cases either within or outside the giant cells [Table - 3].

Table 5: Our experience with potassium iodide therapy for chromoblastomycosis

Chromoblastomycosis was originally reported from Brazil. It was first reported from India in 1957 by Thomas et al. [1] Other than India and Brazil, Chromoblastomycosis has been reported from Madagascar, Sri Lanka, West Central Africa, Japan, Mexico, Cuba, Dominican Republic, Nepal, Australia, and Venezuela. [2],[3],[4],[5],[6],[7],[8],[9],[10],[11],[12],[13],[14] According to one report, Madagascar represents the most important focus of this fungal disease. [7] Brazil is another country reporting large number of cases. [2],[3],[4],[5],[6] In most of these reports, chromoblastomycosis is seen to be a disease of rural male agriculturists and the commonest etiological agent is F. pedrosoi.

In India, Thomas et al first reported two cases of chromoblastomycosis from Assam. [1] Since then, there has been several case reports from the Sub-Himalayan belt, Western and Eastern coasts. Rajendran et al in 1997 reviewed 30 cases till then from all over India and reported 4 new cases including 2 cases from Jammu and Kashmir and Bihar. [15] Sharma et al in 1999 also reviewed the Indian scenario and reported four more cases. [16] Kumar et al reported two cases in 2000 and Sharma A reported four cases from Assam in 2010. [17],[18] All these areas have warm and humid climatic conditions and it is seen that the Central and North Western arid zones of the country are free of the disease. [16] Among the previously reported cases, 18 were from South India [Andhra Pradesh (5), Karnataka (5), Tamil Nadu (4), Kerala (3), Pondicherry (1)] [Table 6]. [15] 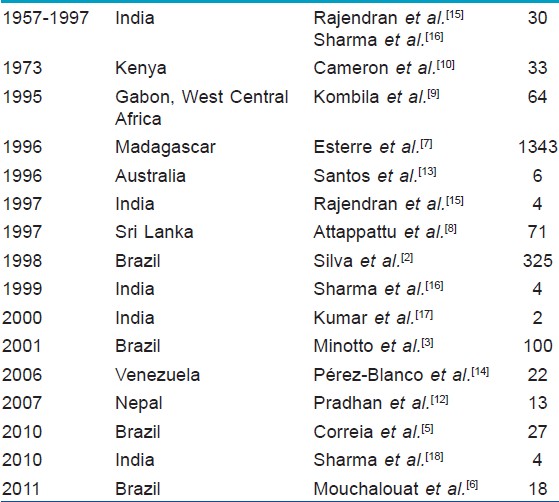 Table 6: A few case series from india and abroad

We herein report 35 cases of chromoblastomycosis from central Kerala. Our cases were from the foothills of Western Ghats and adjoining midland areas. The foothill areas of Western Ghats and the adjoining areas are well known for their rubber plantations where there is plenty of decaying vegetative matter. Such an environment could be favorable for the growth of the fungus. The etiological agents of chromoblastomycosis have been discovered from soil, wood, vegetable debris, and similar substances. [19] Most of our patients were employed in various agricultural tasks including rubber tapping. Rural males from an agricultural background were commonly affected which is the common pattern of the disease worldwide. [3],[8],[9],[12] The relationship with trauma correlates well with the predominant involvement of extremities among agriculturists. The most common species of fungus isolated was F. pedrosoi. F. pedrosoi is the most common organism causing Chromoblastomycosis worldwide and is also the most common isolate in humid tropical climates. [2],[3],[4],[5],[6],[9]

Potassium iodide is considered to be an effective drug for chromoblastomycosis. [22] The therapeutic response to Itraconazole and Terbinafine are thought to be better if the causative agent is C. carrionii. [23] Our most common isolate was F. pedrosoi. We tried potassium iodide in some of our patients and found it to be cost effective, especially in a setting like ours.