Background: Chronic actinic dermatitis (CAD), one of the immune mediated photo-dermatoses, comprises a spectrum of conditions including persistent light reactivity, photosensitive eczema and actinic reticuloid. Diagnostic criteria were laid down about 20 years back, but clinical features are the mainstay in diagnosis. In addition to extreme sensitivity to UVB, UVA and/or visible light, about three quarters of patients exhibit contact sensitivity to several allergens, which may contribute to the etiopathogenesis of CAD. This study was undertaken to examine the clinical features of CAD in India and to evaluate the relevance of patch testing and photo-aggravation testing in the diagnosis of CAD. Methods: The clinical data of nine patients with CAD were analyzed. Histopathology, patch testing and photo-aggravation testing were also performed. Results: All the patients were males. The average age of onset was 57 years. The first episode was usually noticed in the beginning of summer. Later the disease gradually tended to be perennial, without any seasonal variations. The areas affected were mainly the photo-exposed areas in all patients, and the back in three patients. Erythroderma was the presenting feature in two patients. The palms and soles were involved in five patients. Patch testing was positive in seven of nine patients. Conclusions: The diagnosis of CAD mainly depended upon the history and clinical features. The incidence of erythroderma and palmoplantar eczema was high in our series. Occupation seems to play a role in the etiopathogenesis of CAD. 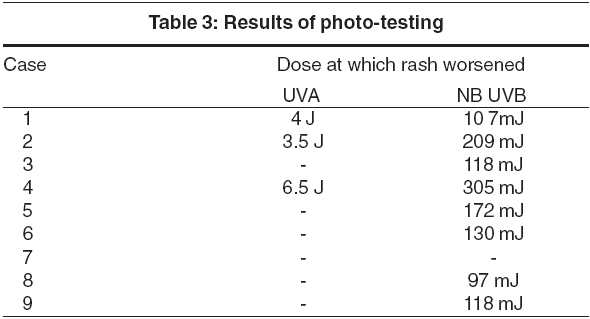 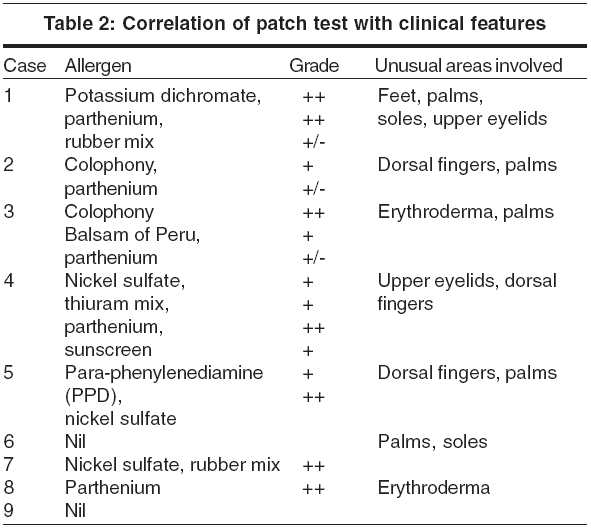 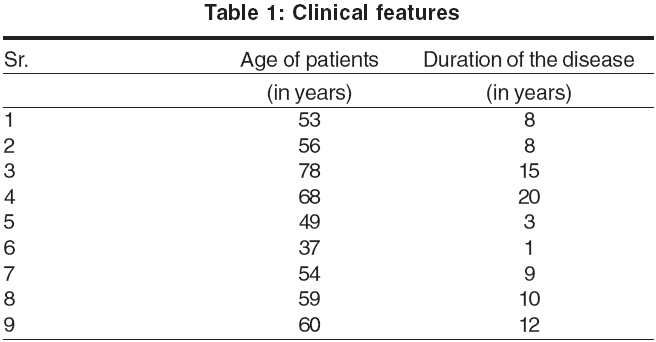 2.Histopathology consistent with chronic eczema with or without lymphoma like changes, and

3.Reduction in the minimal erythema dose (MED) to both UVB and UVA.

Allergic contact dermatitis (ACD) commonly coexists with CAD, often preceding the onset of any photosensitivity,[3] reactivity to one or more allergens occurring in 75% of CAD patients. Sesquiterpene lactone extracts from Compositae plants are implicated most commonly, but contact allergy to fragrances, colophony, rubber and sunscreens are also frequently seen in CAD patients.

CAD predominantly affects sun-exposed sites but shaded areas may also be affected. Involvement of shaded sites, e.g., eyelids, may point to an associated ACD. Eczematous patches, which later become confluent, occur on exposed areas like back of the hands, face, scalp, neck, etc. Progression to erythroderma has been reported. The palms and soles may show eczematous changes. Since facilities for photo-testing or photopatch testing are not freely available and since the histopathology is non-specific, the clinical features remain the most important tool in the diagnosis of CAD.

This study was undertaken to examine the clinical features of CAD in India and to evaluate the relevance of patch testing and photo-aggravation testing in the diagnosis of CAD.

We conducted this study at Hyderabad and nine cases of CAD seen over a period of ten months (April 2004 to January 2005) were selected for the study. The diagnosis was suggested by: a) the typical eczematous eruption over the exposed areas, b) histological features of dermatitis, and c) history of extreme sensitivity to solar radiation. Investigations like anti-nuclear antibodies, anti-SSA, anti-SSB antibodies, examination of urine/feces for porphyrin determination, complete blood count, blood urea, liver function tests, IgE levels and HIV (ELISA) tests were done in all the cases. Patients with other photosensitivity dermatoses were excluded. Skin biopsy, photo-testing and patch testing were done in all the cases.

Patch test: Patch tests were done with the Indian Standard battery, as approved by the Contact and Occupational Dermatoses Forum of India (CODFI), and supplied by M/s Systopic Laboratories. Additionally, two sunscreen lotions were used for patch testing, and in one patient, streptomycin solution (since he gave a history of administering streptomycin injections daily for about 13 years). Patch test units containing aluminium chambers were used. The allergens were placed in the chambers and the units were applied to the backs of the patients. The patches were removed after 48 hours (day 2), and read after 30 minutes. A second reading was taken after 96 hours (day 4). The reactions were graded as negative (-), doubtful positive (+/-) when there was erythema but no palpable rash, positive (+) when there was a clear palpable erythema, and strong positive (++) when the reaction was beyond the chamber margins.

The MED to both UVA and UVB could not be assessed as all the patients had type V skin in the Fitzpatrick classification. Patch testing was performed to common contact allergens, especially fragrances, rubber, colophony, sunscreens and the Compositae group of plants, to confirm any associated contact sensitivity.

Photo-aggravation testing: The patients were exposed to NB-UVB in Daavlin whole body chamber, in a serially increasing dosage starting from 80 mJ. The test was done thrice weekly with a 10% increment at every subsequent visit. The dosage at which the rash worsened was noted. After about 2 weeks of strict avoidance of sunlight, and use of antihistamines and emollients, when the rash relatively subsided, patients were exposed to UVA in serially increasing doses starting from 0.5 J/cm2, with 0.5 J increments at every visit. Testing was done thrice weekly.

All the nine patients in our study were men, with ages ranging from 37 years to 78 years. The mean age of onset was 47.5 years (range, 36 years to 63 years). The duration of the disease ranged from 1 year to 20 years and the mean duration was 9.5 years [Table - 1]. All the patients in our series were involved in occupations that involved outdoor work.

Clinical features: Pruritus was a feature in all the patients. It was quite severe and often interfered with the patients′ sleep pattern. In the initial stages, the rash used to appear during summer only, but later the seasonal variation disappeared and the eruption became severe and perennial. The rash first appeared on the face [Figure - 1] in all but one patient, who gave a history of forearm involvement before the face was affected. The mid-forehead was spared in all patients initially. But later, especially in erythrodermic patients and in advanced stages, this feature was gradually obliterated. The rash later spread to other exposed areas like the hands, forearms, scalp [Figure - 2], ears, ′V′ area of the neck, back of the neck, etc. Two patients presented with erythroderma. Three patients had severe, recurrent hand eczema involving the dorsal aspect of the terminal phalanges. Three patients also showed involvement of palms [Figure - 3] and two had palmoplantar involvement with dry patchy hyperkeratotic eczema.

Histopathology showed an eczematous picture with spongiosis, acanthosis and a dermal, predominantly perivascular lymphocytic infiltrate and hyperkeratosis in chronic stages. On patch testing, 7 out of 9 patients showed positive reactions to one or more contact allergens [Table - 2]. Eight out of 9 patients experienced worsening of the rash on photo-testing. Five tested positive to UVB, 3 to both UVB and UVA. The dosage of UVB responsible for aggravation of the dermatitis ranged from 97 mJ to 305 mJ and UVA ranged from 3.5 to 6.5 J/cm2 [Table - 3].

The treatment taken in the past was symptomatic and included avoidance of sunlight, sunscreens, antihistamines and topical steroids. One patient [Table - 1], patient 4 was started on azathioprine 100 mg daily for 8 weeks. It was discontinued after the dermatitis settled. After 3 months the patient again experienced a relapse.

Chronic actinic dermatitis is characterized by a persistent eczematous eruption, occasionally associated with infiltrated papules and plaques predominantly affecting exposed skin and to a lesser extent, covered skin, in response to UVR and rarely to visible light. It usually affects the middle aged or elderly, with approximately 90% of patients being male.[4] A new subgroup affecting young men and women with associated atopic dermatitis has been identified. [5],[6],[7],[8]This variant was previously thought to be photo-aggravated atopic dermatitis.

CAD can mimic very closely air-borne contact dermatitis (ABCD), photo-aggravated ACD, atopic dermatitis or drug photosensitivity. Increased IgE or family or personal history of atopy, onset at an early age, would differentiate atopic dermatitis from CAD. Drug photosensitivity is generally linked to an inducing substance and the eruption is generally not eczematous. In photo-aggravated contact allergy, there may be a history of contact and the rash beginning in an area with a localized eczematous response followed by photo-aggravation, mimicking CAD. Clinically ABCD mimics CAD most closely. In ABCD generally the whole face is involved, whereas in CAD there is usually sparing of skin creases, the upper eyelids, the area under the earlobe, nose and the lower lip, under the chin, and the finger webs. Flexural involvement is seen frequently in ABCD in contrast to CAD.

In our series two patients had erythroderma, five patients showed palmar/palmoplantar eczema and three had frank ACD involving the dorsal fingers. The incidence of these associated features was quite high in our study population.

The mid-forehead was spared in all our patients initially. The reason for this could be linked to the anatomy of that area; the lateral forehead is comparatively bossed, getting more exposed to radiation initially than the central mildly depressed area. This could be akin to the involvement of the lateral forehead in many Indians with seborrheic melanosis rather than the central partially "protected" mid-forehead. Later, as the disease progresses, this feature is obliterated as the amount of UV radiation sufficient to cause dermatitis reaches the optimum in the mid-forehead.

The histological and immunohistochemical features of CAD, along with increased ICAM-1 expression mimic persistent ACD.[9],[10] The dermal infiltrate consists predominantly of T lymphocytes with a trend towards lower CD4+/CD8+ ratios in patients with more florid histology, again features seen in persistent and pseudolymphomatous forms of ACD.

CAD may also represent a T cell mediated disease that begins as photoallergic dermatitis. An interesting theory[3] proposes that during the initial localized photoallergic reaction, a normal skin constituent is altered to become antigenic. The induction of a local response begins with UVA dependent covalent binding of hapten to an endogenous protein, and is followed by an eczematous delayed type hypersensitivity response. As the disease progresses to CAD, UVB + UVA alone may trigger the immune response at any site, without the hapten, by continuing formation of antigenic photoproduct from the omnipresent endogenous carrier protein.

Allergic contact dermatitis commonly coexists with CAD, often preceding the onset of any photosensitivity.[11] Reactivity to one or more allergens occurs in 75% of CAD patients.[12],[13] Sesquiterpene lactone extracts from Compositae plants are implicated most commonly, but other allergens may include fragrance, colophony, rubber and sunscreens. Phototoxic responses following exposure to contact allergens might alter endothelial proteins to antigenic forms leading to CAD. Patch testing was positive in 7 of 9 patients (78%).

Eight out of our nine patients (89%) had outdoor jobs and the remaining patient was exposed to chemical fumes. Perhaps chronic cutaneous immunostimulation from constant exposure to both airborne allergens (plants or chemical fumes) and UV exposure may help the cutaneous immune recognition of the putative endogenous photoallergen.

The limitations of our study include the small number of patients and the inability to do the MED photo-testing. Without photo-testing, it is difficult to diagnose CAD with conviction. However, because of practical difficulties, when MED cannot be performed in suspected patients of CAD, clinical features offer the only significant clue to the diagnosis.

To conclude, erythroderma and palmar eczema was found with greater frequency in our patients. Dorsal finger eczema and upper eyelid involvement may predict an associated allergic contact dermatitis. Sparing of the mid-forehead seems to be a feature of initial CAD in our patients. Occupations involving outdoor presence with chronic sun exposure seem to precipitate CAD. Patch testing is very relevant and is important for both the diagnosis and treatment of CAD.