Background: Chronic idiopathic urticaria (CIU), in its extremely severe form, can pose a therapeutic challenge to the treating physician. It has been noted that in one third of such patients, autoantibodies against the IgE receptor are seen and such patients have more severe and unremitting urticaria. Aim: To compare clinical features of autoimmune urticaria with those of other CIU patients. Methods: We conducted a prospective study in an attempt to correlate the clinical features with autoantibodies, indirectly detected via the autologous serum skin test (ASST), which is the simplest and the best in vivo clinical test for detection of basophil histamine-releasing activity. Discussion: Out of 100 patients with chronic idiopathic urticaria, 34 showed a positive reaction to the autologous serum skin test and it was found that the frequency and severity of attacks was higher in these patients. Conclusion: ASST may be used as a simple and cost-effective test for the classification of chronic urticaria, which has proven to be a therapeutic challenge to the treating physician.
Keywords: Autologous serum skin test, Chronic idiopathic urticaria, Histamine 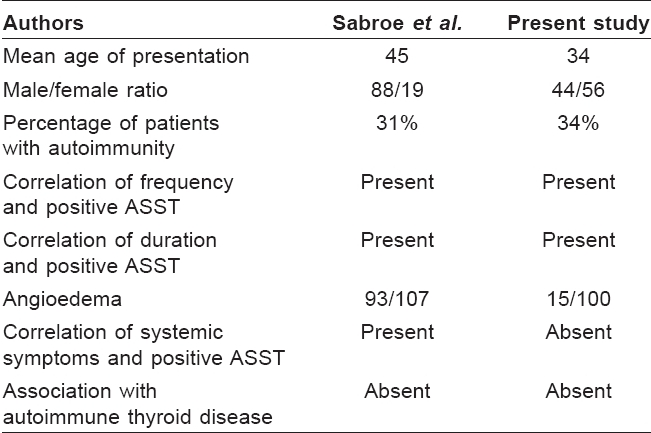 Table 3: Comparison of our study with previous study

Table 3: Comparison of our study with previous study

Chronic idiopathic urticaria (CIU) is manifested as widespread, short-lived (lasting less than 24 hours) weals occurring daily or almost daily for at least 6 weeks and where a predominant physical cause has been excluded. CIU is extremely disabling in its severe form and can be difficult to treat. Mast cell degranulation is of central importance in the pathogenesis of CIU. Recent reports have indicated the presence of autoantibodies in about one third of all patients with CIU. These histamine-releasing autoantibodies are directed against the ∝ subunit of the high affinity IgE receptor, F ceR 1∝. Patients with autoantibodies in their sera have no distinctive diagnostic clinical features though they do tend to have more severe and unremitting urticaria. [1],[2],[3]

The basophil histamine release assay is currently the gold standard for detecting these functional autoantibodies in the serum of patients with chronic urticaria. However, this bioassay is difficult to standardize because it requires fresh basophils from healthy donors, is time-consuming and it remains confined to research centers. Western analysis, enzyme-linked immunosorbent assays (ELISA) and flow cytometry may be useful for screening in the future but they need to be validated.

Autologous serum skin test (ASST) is the simplest and the best in vivo clinical test for the detection of basophil histamine-releasing activity. ASST has a sensitivity of approximately 70% and a specificity of 80% when read at 30 min as a pink serum-induced weal ≥1.5 mm bigger than the adjacent normal saline control injection site. It may be used as a reasonably predictive clinical test to indicate the presence of functional circulating autoantibodies. [4] We studied clinical features of CIU and corrected them with results of ASST.

Samples of 5 ml of venous blood were collected in sterile Vacutainers without a clotting accelerator and allowed to clot at room temperature for 30 min. Serum was sent to a clinical laboratory for centrifugation at 2000 rpm for 15 min. Samples of 0.05 ml of autologous serum and 0.9% sterile normal saline were separately injected intradermally into the volar aspect of the right forearm with a gap of 5 cm between injection sites. About 0.05 ml of histamine (10 µg/ml) was injected into volar aspect of the left forearm as a positive control. Weal and flare response was measured at 30 min. ASST was deemed to be positive if a serum-induced weal which was both red and had a diameter bigger than a saline-induced response by ≥1.5 mm was seen at 30 min.

Descriptive statistics was used to summarize data for comparison between ASST-positive and ASST-negative groups. Chi Square test was used for categorical variables and the nonparametric test (Mann-Whitney test) was used for other variables as they were not distributed normally.

Out of 100 patients, 34 patients (34%) showed a positive reaction to the autologous serum test in the form of a weal and flare response, which was 1.5 mm bigger than the saline control read at 30 min [Figure - 1].

Patients were categorized into two groups (ASST-positive and -negative) based on ASST, for evaluation of clinical features.

There was no significant difference in age distribution among patients with and without autoantibodies at the time of assessment [Table - 1]. Of a total of 100 patients, 56 were females and 44 males. Eighteen out of the 34 ASST-positive patients (52.94%) and 38 out of the 66 ASST-negative patients (57.58%) were female.

The present study has evaluated patients with chronic idiopathic urticaria (CIU) by autologous serum skin testing and compared the clinical features of patients with positive and negative ASST results. The proportion of patients with CIU who showed a positive reaction to ASST was 34%, which is comparable with earlier reports [Table - 3].

In the present study, the same investigator has recruited the patients and done the test. Thus, there is a possibility of bias due to lack of blinding. However, since the test interpretation was clear-cut and unambiguous, we feel this would not significantly affect the results. Sabroe et al. compared clinical features of patients with and without autoantibodies and concluded that patients with autoantibodies in their sera have more severe and unremitting urticaria.

A study done by Sabroe et al. [5] concluded that patients with autoantibodies in their sera have more severe attacks according to several parameters including frequency, duration of individual episodes and sites involved. This is in concordance with our study, which noted frequent long-lasting episodes in ASST-positive patients.

There was no significant difference between ASST-positive or -negative patients regarding sites affected or diurnal variation. Majority of patients (90%) had generalized lesions involving the trunk and extremities.

Of the total 100 patients, 32 patients showed a positive challenge test for dermographism. Dermographism occurred more frequently in 29/32 ASST-negative patients than in those (3/32) who were ASST-positive ( P < 0.001). Dermographic subjects comprise a special group. They do not have autoantibodies according to in vitro tests but manipulation of skin while injecting the sample may cause a weal and flare response regardless of the substance injected and may be taken as false positive responses. [4]

ASST-positive patients had significantly more systemic symptoms in a study by Juhlin. [9] In particular, gastrointestinal symptoms and flushing occur more frequently in patients with autoantibodies. [9] Our study failed to reveal such associations.

In our study, out of ten patients tested, ANA was positive in one patient who also had positive ASST. Although a higher frequency of autoimmune disease has been reported in patients with autoimmune urticaria by O′ Donnel et al. [10] we did not find an increased incidence of other autoimmune diseases in our clinical study.

Abnormal TFT values were detected in three ASST-positive patients. The association of chronic urticaria with thyroid autoimmunity has been studied by Leznoff et al. [11] and it has been postulated that thyroid autoimmunity may play a role in the pathogenesis of chronic urticaria and angioedema. However, in contrast with previous studies, [11] we did not find any difference in the incidence of thyroid disease. This is likely to be because an insufficient number of patients was included for the study of a disease of low incidence (thyroid autoimmunity) or because TFT and thyroid autoantibodies were not routinely measured for all patients. Thus, TFT alone is not enough to rule out thyroid disease and the thyroid antibody test should be carried out in all CIU patients. Hence, patients with autoimmune urticaria have no distinctive, diagnostic clinical or histopathological features, which differentiate them from nonautoimmune cases although they tend to have more severe urticaria.

In our setting, ASST is the only available test for the diagnosis of autoimmune urticaria. It is a simple, inexpensive, semiinvasive and easy-to-perform test which can be done and recorded by the dermatologist himself to determine whether the patient′s CIU is autoimmune in origin. As conventional approaches of management may be unsuccessful, ASST is especially important from the therapeutic point of view as it can help the dermatologist to commit himself to initiate immunosuppressive therapy in such patients.

We are thankful to Mrs. Meera B and Mr. Dinesh P, our laboratory technicians, who helped us with ASST.