Facial pigmentary demarcation lines (PDL) were described by Malakar and Dhar in Indian population [1] and are classified into 3 types F, G, and H. [2] Increased incidence of PDL in females and type B PDL in pregnancy suggests that increased female sex hormones may cause PDL. [3] Hence, a cross-sectional study was conducted on consecutive patients of facial PDL to evaluate the hormonal profile. Patients with facial PDL presenting to the authors in the Dermatology Outpatient Department of Safdarjung Hospital from July 2009 to January 2010 were recruited. PDL was diagnosed clinically by two authors independently and was classified as: F: ′V′ shape on lateral aspect of face between malar prominence and temple, G: ′W′ shape on lateral aspect of face between malar prominence and temple, and H: Linear band of hyperpigmentation from angle of mouth to lateral aspect of chin. Blood sample (5 ml) was taken after informed consent for serum levels of estradiol, progesterone, follicle stimulating hormone (FSH), leutinizing hormone (LH), and prolactin on 4 th day of menstrual cycle. Twenty-seven patients (26 females, 1 male) were recruited, out of which 18 got hormonal levels done. The demographic and clinical details are summarized in [Table - 1]. The mean age of onset was 24.4 years (10-50 years), and mean duration of the disease was 4.89 years (2 months to 22 years). One was a field worker, 18 (66.6%) had indoor job, and 8 (29.6%) were housewives with average 1.4 hours sun exposure daily. Sunscreen was regularly used by 12 (44.4%) and physical barriers of photoprotection by 10 (37%). Family history of facial PDL was present in 6 (22.2%). Menstrual cycle was regular in 20 (74%), irregular in 4 (14.8%), and menopause was present in 1 (3.7%). None had used oral contraceptive pills or any other hormonal drugs. Two had onset of PDL in first pregnancy. Nine patients had taken prior treatment such as hydroquinone, steroids, and retinoids with minimal response in 3. 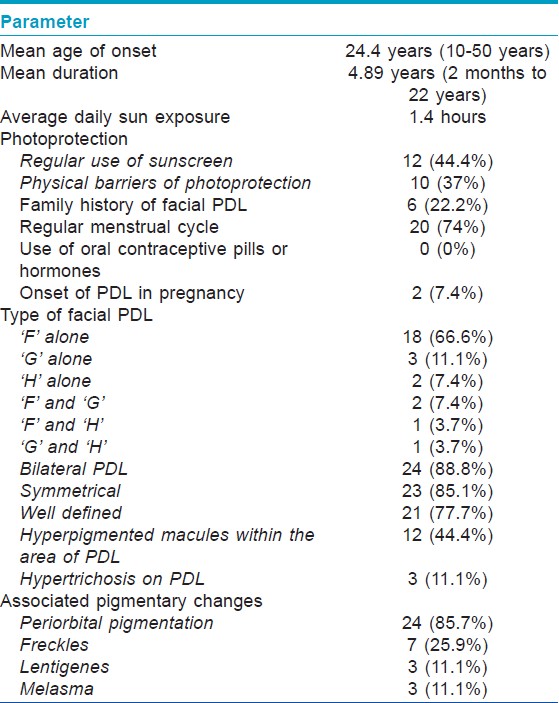 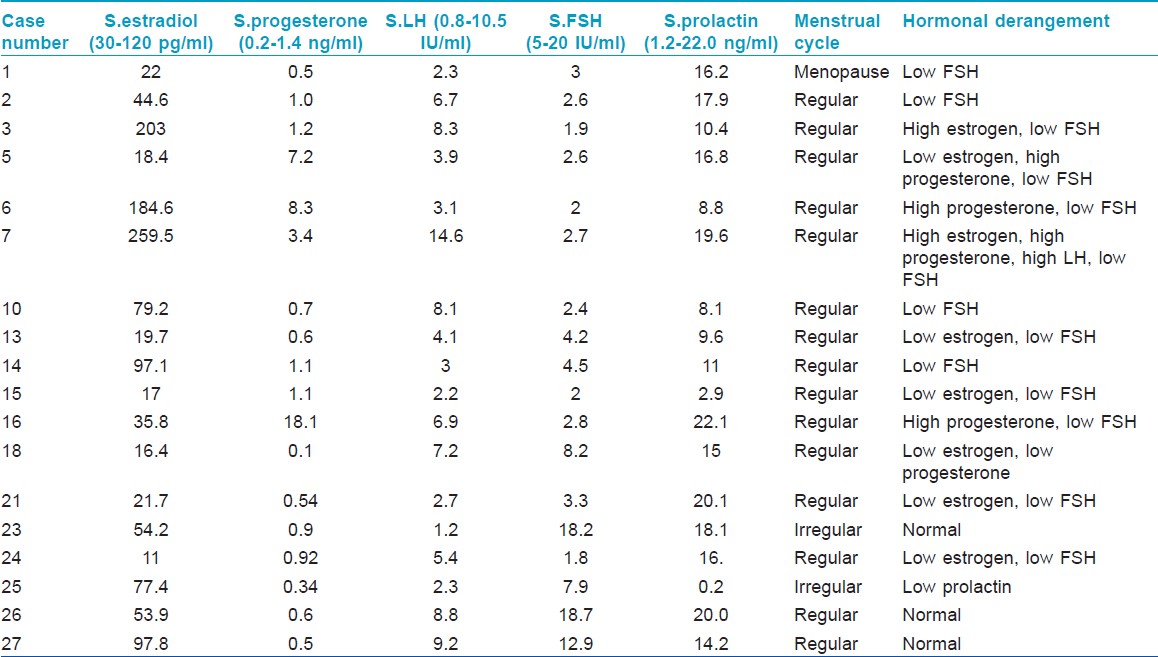 Higher female preponderance in this study maybe due to increased cosmetic awareness in females. The onset of facial PDL is in puberty, [2] but in our study, onset was in young adulthood and onset in pregnancy was in only 7.4%, diminishing the role of increased female sex hormones as a cause of PDL.

Family history of PDL in 22.2% suggests strong genetic predisposition. Bilaterality, symmetry, definition, and speckling are important morphological features of PDL. The speckling (hyperpigmented macules) is different from lentigenes as they remain confined to the hyperpigmented area of PDL. Periorbital melanosis is considered as an extension of type ′F′ PDL, [5] but we observed it with all types of PDL. A horizontal line of demarcation between hyperpigmented and normally pigmented skin suggestive of PDL was noted on the forehead in 37% patients, and we propose that it should be considered separately as type ′I′ PDL.

The limitations of this study were small number of patients, lack of control group to compare hormonal changes in other pigmentary diseases and normal population, lack of follow up and that patients did not give free consent for performing biopsies. It is proposed that more studies should be conducted on larger group of patients with recent onset of facial PDL so that a temporal correlation between hormonal abnormalities and pathogenesis of PDL can be ascertained.