Twenty patients who were treated surgically at our clinic for acquired ungual fibrokeratomas from 2003 to 2014 were included. We analysed patient charts, clinical pictures and patient records (which included sex, age, duration of illness, trauma history and history of previous treatment). Cases with tuberous sclerosis were not included. Acquired ungual fibrokeratomas were classified into four morphological types: Rod-shaped, dome-shaped, flat and branching [Figure - 1]. They were also classified based on location as periungual, subungual and intraungual (”dissecting ungual”) [Figure - 2]. All patients were treated by complete surgical excision and the diagnosis confirmed by histopathologic examination of all excised lesions. 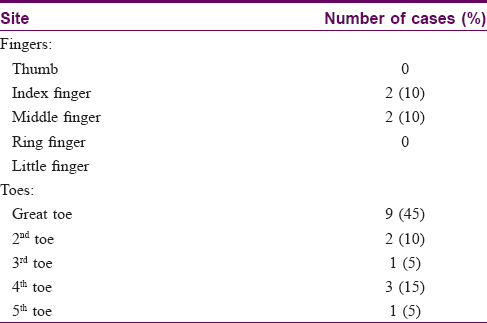 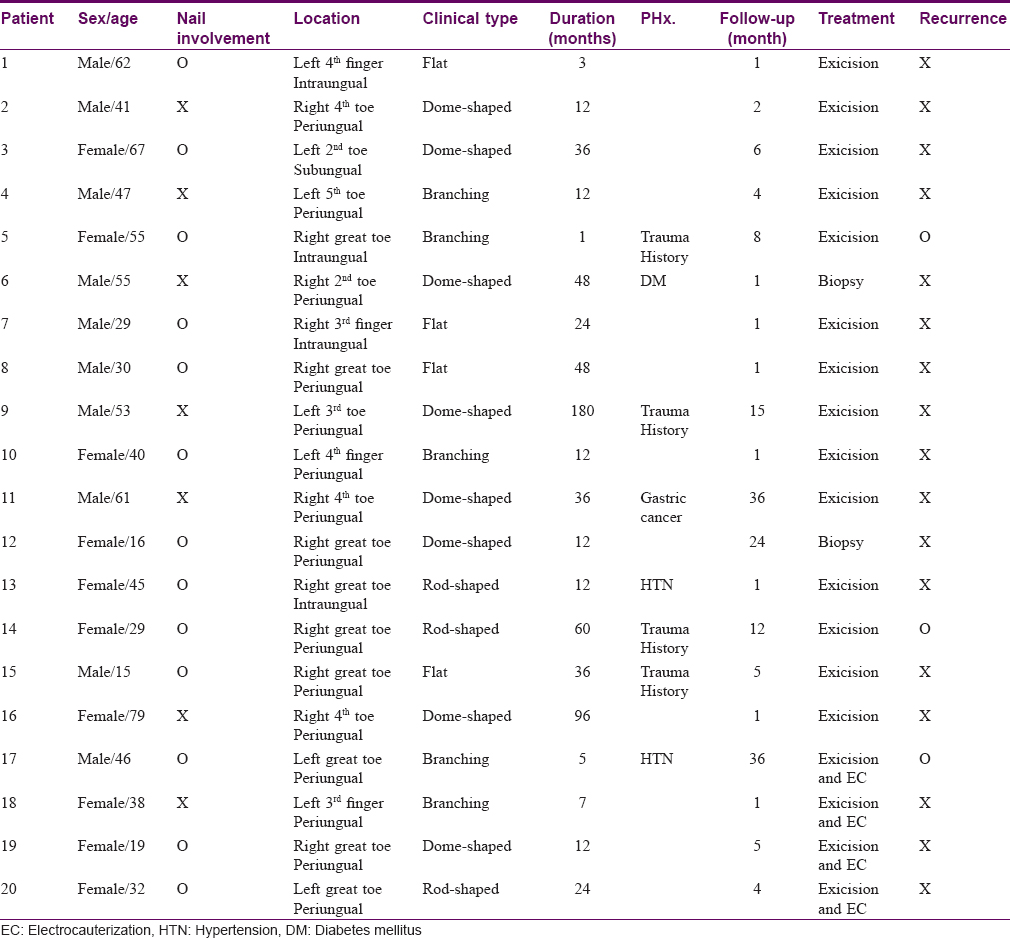 The patients ranged in age from 15 to 79 years with a mean of 41.2 years. The male to female ratio was 10:10. Almost all patients (17/20) remembered when the lesion first appeared. The average delay for seeking medical advice was 28 months. Symptom duration was 40.4 months on average. A high proportion of patients were in their 40s (5/20). Three patients had lesion onset in childhood. Associated diseases observed included hypertension (2/20), diabetes mellitus (1/20) and gastric cancer (1/20). Four patients (20%) had a history of trauma with the lesion developing 2.5 years later on average.

The histopathological findings in our cases are summarized in [Table - 3]. 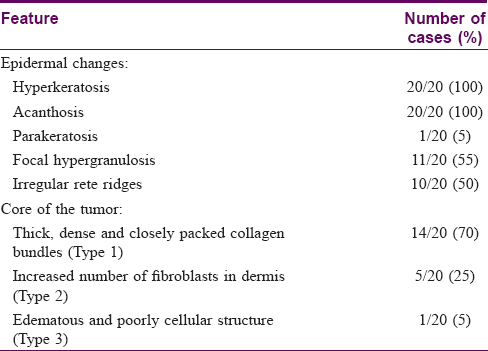 All patients were treated by surgical excision [Figure 5a], [Figure 5b], [Figure 5c], [Figure 5d]. The mean post-excision follow-up period was 8.6 months. After excision, recurrence occurred in three cases, all of whom gave a history of trauma preceding the appearance of the tumors. During follow-up, only one patient had residual scarring around the proximal nail fold and almost all patients were satisfied with the postoperative result as they regained normal nail contours.

Including the word “acquired” in the terminology of this unusual tumor leads one to believe that there is a precipitating factor. However, the etiology of acquired ungual fibrokeratoma is still unknown. Hare and Smith proposed that trauma is involved, while Nemeth and Penneys reported that factor XIIIa-positive dermal dendritic cells play an important role in the regulation of collagen synthesis.[7],[8],[9],[10] A traumatic origin has been suggested because acquired ungual fibrokeratomas occur most frequently on the fingers and toes.[11] However, a history of injury is usually present in only a few cases and in only four of our patients, although other patients might not have noticed minor trauma. In our study too, the middle and ring fingernails as well as the great and fourth toenails were more commonly affected and these are sites likely to be exposed to trauma or infection, supporting the above hypothesis.[7],[8] Trauma may be a trigger due to damage to the nail matrix but further research is needed.

The histopathologic appearance of an acquired ungual fibrokeratoma is distinct. Histopathologic findings include hyperkeratosis, acanthosis, focal hypergranulosis and irregular rete ridge elongation in the epidermis. The core of the tumor consists of thickened collagen in the dermis oriented parallel to the long axis of the lesion [Figure - 6].[1] In 1985, Kint et al. classified acquired digital fibrokeratomas into three histologic subtypes.[14] In all three, the epidermis is acanthotic and hyperkeratotic. In the first variant, tumor cores are composed of thick, dense, closely packed and irregularly arranged collagen bundles. The second variant shows an increase in grouped fibroblasts and reduced elastic fibers. The third variant is composed of a poorly cellular and edematous structure with completely absent elastic tissue. When this classification was applied to our patients, the first variant was found to be the most common (70%) followed by the second (25%) and third (5%) variants [Table - 3], consistent with the above report by Kint et al.

Acquired ungual fibrokeratomas do not spontaneously regress.[12] They should be excised when they cause symptoms or significant cosmetic problems. The preferred treatment is total excision because superficial removal usually results in recurrence.[16] Various surgical techniques can be used to resect these tumors depending on their size and location. Usually, the tumor is incised around its base and dissected from the bone. If a lesion is beneath the nail plate, partial or total removal of the nail is required first. Lesions above the nail plate however, can be removed by shaving followed by phenolization, carbon-dioxide laser vaporization or surgical resection after lifting the proximal nail fold as a banner flap.[17],[18],[19] During the procedure, the germinal matrix should be preserved by careful dissection along the undersurface of the tumor and the tumor should be completely excised with its basal attachment.[20],[21] To minimize the risk of recurrence, we recommend careful elevation of the nail plate and retraction of the proximal nail fold to expose the whole tumor and surrounding nail matrix, avoiding additional injury to the nail matrix.

Our study had some limitations. Apart from being a retrospective study with inevitable biases, we only had a limited number of patients. Further studies are needed to look into the etiology of acquired ungual fibrokeratomas.

This study was supported by the Basic Science Research Program and Creative Materials Discovery Program through the National Research Foundation of Korea (NRF) which is funded by the Ministry of Education, Science and Technology and the Ministry of Science, Information and Communications Technologies (ICT) and Future Planning (2015R1C1A2A01055073, 2016M3D1A1021387).