Clinical efficacy of rituximab in the treatment of pemphigus: A retrospective study

Background: Pulsed corticosteroids have been used successfully for the management of pemphigus. However, prolonged use of glucocorticoids may be associated with adverse effects and some patients show a poor response to conventional therapy. Biologics have shown a promising role in such cases; however, there is limited data from the Indian subcontinent. Objective: The primary objective was to assess the efficacy and adverse effects of rituximab in pemphigus. The secondary objective was to measure the cumulative doses of corticosteroids required for these patients. Methods: We undertook a retrospective review of records of 25 pemphigus patients (pemphigus vulgaris: 21, pemphigus foliaceus: 4) who had received rituximab infusion (rheumatoid arthritis protocol in 21 patients, modified in 4). Oral prednisolone was administered in dosages up to 0.5 mg/kg of body weight and tapered over the next 3–4 months according to the disease activity. However, other immunosuppressive agents such as cyclophosphamide and azathioprine were continued for one year after clinical remission was achieved. Results: Complete remission was observed in 22 (88%) patients. The mean time to disease control and complete remission was 1.10 and 4.36 months, respectively. Four (16%) patients experienced relapse after a mean duration of 11.75 months. The mean total dose of oral steroids administered was equivalent to 3535.64 mg of prednisolone. Exacerbation of disease was noted in two patients after the first dose of rituximab and infectious complications, pneumonia and cellulitis, developed in one patient each. Limitations: A small sample size, the retrospective nature of the study and unavailability of follow-up anti-desmoglein autoantibodies levels were limitations. Conclusion: Rituximab is an effective agent in the treatment of pemphigus. The use of rituximab enabled use of a lower initial dose of oral prednisolone in pemphigus and hence reduced its total cumulative dose. Severe side effects were rare.
Keywords: Clinical efficacy, pemphigus, rituximab

Systemic glucocorticoids are still the most effective therapeutic agent for pemphigus.[2] Immunosuppressive agents such as cyclophosphamide, methotrexate, cyclosporine, mycophenolate mofetil and azathioprine are used in pemphigus for their steroid-sparing effect. Rituximab is a chimeric monoclonal antibody that targets the CD20 molecule on B-cells.[3] It is a US Food and Drug Administration approved drug for lymphoma, rheumatoid arthritis, chronic lymphocytic leukemia and Wegener's granulomatosis but has been also used off-label in severe and refractory pemphigus since 2002.[4]

The primary objective of this retrospective study was to assess the efficacy and adverse effects of rituximab in the treatment of pemphigus patients, most of whom were refractory to conventional therapy. The secondary objective was to measure the cumulative dose of corticosteroids required in these patients.

We reviewed the records of 25 patients with pemphigus who were treated with rituximab infusion in our department from March 2012 to January 2014. All patients were from the central, Northern and Eastern parts of India. Twentyone patients were recalcitrant to other immunosuppressive agents but in four patients, rituximab was used as first line therapy.

Skin biopsy, Tzanck smear, direct immunofluorescence and serum anti-desmoglein autoantibody levels [MESACUP desmoglein test Dsg1 and Dsg3 ELISA kits (RG-7880EC-D and RG-7880EC-D), MBL international corporation,≥20U/ml=positive] were done at baseline. A Mantoux test, viral markers for hepatitis B surface antigen, anti-hepatitis C virus, enzyme-linked immunosorbent assay for human immunodeficiency virus and routine biochemical investigations were also performed. After premedication (100 mg of hydrocortisone intravenously, 22.75 mg of pheniramine maleate intravenously and 500 mg of paracetamol orally), rituximab infusion was given under strict monitoring over 5–6 hours. The rate of infusion was initially 50 ml/hour, escalated by 50 ml/hour every 30 min upto a maximum infusion rate of 400 ml/hour. Twenty one patients received two doses of 1 gm of rituximab, 2 weeks apart. One patient received three doses of a 500 mg infusion at intervals of 2 weeks, four such doses were given to two other patients and one patient received four doses of 640 mg at intervals of 2 weeks. Oral prednisolone was administered at a dosage up to 0.5 mg/kg of body weight and tapered over the next 3–4 months according to the disease activity. However, other immunosuppressive agents such as cyclophosphamide and azathioprine, were continued for one more year after clinical remission and the stoppage of oral prednisolone.

The early endpoint was time to disease control which was defined as the time at which new lesions ceased to form and established lesions began to heal.

Among the late endpoints, complete remission was defined as the absence of new or established lesions for at least 2 months. Partial remission was defined by the presence of transient new lesions that healed within 1 week with or without minimal therapy, including topical steroids. Relapse was characterized by the appearance of 3 or more new lesions in a month that did not heal spontaneously within 1 week or by the extension of established lesions, in a patient who had achieved disease control.[5]

There were 25 patients with pemphigus comprising 17 men and 8 women with a mean age of 44.47 years (23–72 years); the duration of disease ranged from 3 months to 13 years (mean duration: 41.99 months). Only cutaneous involvement was present in four patients while in 21 patients, both the skin and oral mucosa were involved. The mean body surface area involved was 7.05%. Based on the histological, immunofluorescence findings and anti-desmoglein autoantibody levels (n = 15), a diagnosis of pemphigus vulgaris was made in 21 patients, and pemphigus foliaceus in four [Table - 1]. 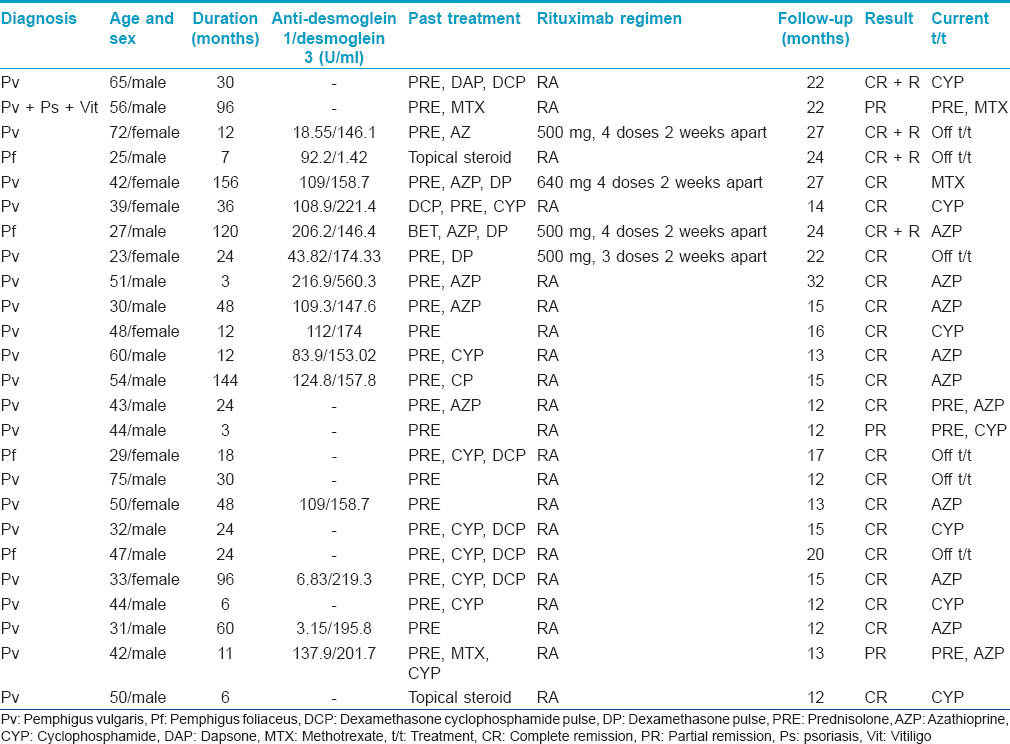 Table 1: Description of cases in our study

The follow-up period after the last rituximab infusion ranged from 12 to 32 months (mean: 17.51 months). Complete remission was seen in 22 (88%) out of 25 patients [Figure - 1] and [Figure - 2]. A partial response was noted in 3 (12%) patients including one patient who had associated chronic plaque psoriasis and vitiligo vulgaris. The mean time to disease control was 1.10 months and time to complete remission was 4.36 months. The mean duration of follow-up for the 21 recalcitrant cases was 48.6 months (range: 12–132). Fifteen patients had already received several cycles of monthly dexamethasone or dexamethasone cyclophosphamide pulse therapy (range: 12–72, mean: 19.8 cycles) while another five patients had received high doses of oral steroids and other immunosuppressive agents such as azathioprine, cyclophosphamide and methotrexate for periods greater than a year. Ten out of 15 patients who had received intravenous pulsed therapy had complete remission with this initial treatment but all of them relapsed after a mean duration of 9.5 months (range: 2–24 months); the other five patients could only achieve a partial remission.

Four (16%) patients experienced relapse after a mean duration of 11.75 months from the last rituximab infusion. Three of these relapses were in previously recalcitrant cases and the relapse occurred within 1 month of the discontinuation of oral prednisolone. One new patient was not on any other medication prior to relapse. Relapses were mild in all the patients and resolved within 1 month without the need for additional medication, except for 50 mg of azathioprine twice daily in one patient who was not on any immunosuppressive agent. Of 23 patients (19 recalcitrant, 4 new), who were on oral prednisolone at the time of rituximab infusion, discontinuation of prednisolone was possible in 19 patients (16 recalcitrant, 3 new), with tapering of doses in the four patients. The mean total dose of oral prednisolone after rituximab infusion was 3535.64 mg (range 465–12,000 mg).

No immediate complications were seen. Exacerbation of the disease was noted in two patients after the first dose of rituximab and no specific predisposing or precipitating factor could be found in either of these two patients. The antibody titers could not be repeated during this period. However, the exacerbation was mild and required only an increase in the dose of oral steroids in one patient and an additional dexamethasone pulse therapy cycle in the other. These patients responded well to the second dose of rituximab. Pneumonia leading to acute respiratory distress syndrome and cellulitis developed in one patient each, but resolved with oral and intravenous antibiotics over the following 2 weeks.

Rituximab has been found effective in the treatment of recalcitrant pemphigus vulgaris. The two most common dosing protocols described for rituximab are the lymphoma and rheumatoid arthritis protocols. The lymphoma protocol comprises four weekly infusions of 375 mg/m2 whereas two infusions of 1000 mg, 2 weeks apart are given in the rheumatoid arthritis protocol.[6],[7],[8],[9],[10],[11] A mixed protocol has also been used in some studies [Table - 2]. 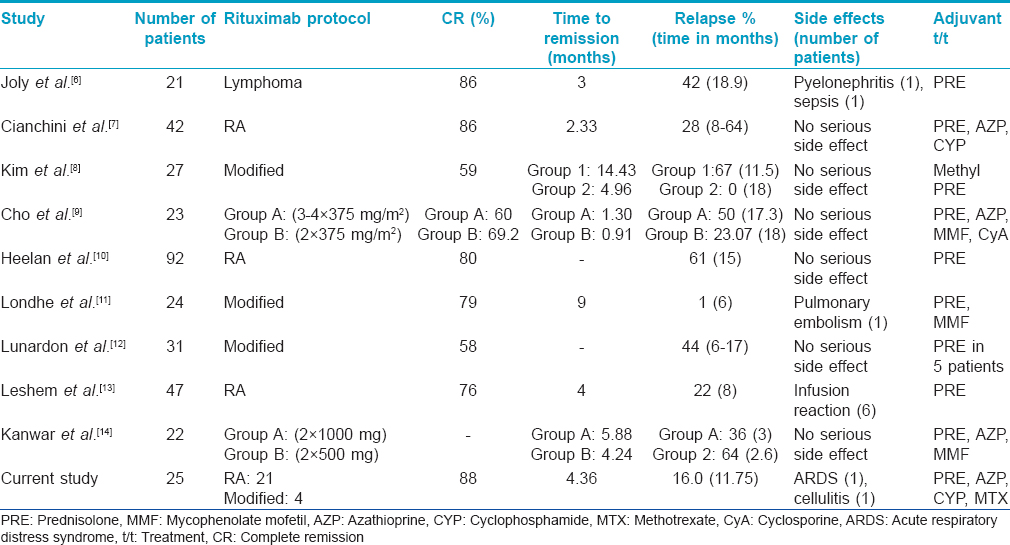 Concerns about rituximab safety stem from multiple studies because serious fatal side effects such as sepsis, pyelonephritis, infusion reactions and other systemic infections have been noted.[8],[13] Mild self-limiting side effects have also been noted in a few other studies which include influenza-like symptoms, gastrointestinal upset, herpes zoster and tachycardia with chest pain.[8] In our study, 10.5% of the patients developed serious infections after rituximab infusion which is lower than the 15.2% reported in a review of the rheumatoid arthritis protocol.[15] We noticed a paradoxical exacerbation of disease activity after the first rituximab infusion in two patients, a feature that has also been observed previously.[13] No specific mechanism can be postulated for this phenomenon but the initial destruction of protective antibodies by rituximab in some genetically predisposed individuals can be considered as a possible explanation. These two patients had good improvement in disease activity after their subsequent rituximab infusions. The major limitations of our study were the small sample size, retrospective nature of the study, lack of a validated severity score, unavailability of follow-up anti-desmoglein auto-antibodies levels and B cell markers.

Our experience shows that rituximab is an effective form of therapy for pemphigus. We found it useful in long-standing as well as early disease. Severe side effects are rare but careful monitoring should be done in all patients to avoid complications. Further larger studies and randomized controlled trials would be valuable to determine the safety and efficacy of this drug as a first-line agent in pemphigus.