Adalimumab is a recombinant human immunoglobulin monoclonal antibody, which inhibits tumor necrosis factor-alpha (TNFα). It is approved for use in moderate-to-severe psoriasis vulgaris and psoriatic arthritis by the United States Food and Drug Administration.

Randomized control trials (RCTs) have shown that adalimumab is efficacious and well-tolerated, with efficacy maintained over more than 5 years of treatment.[1] However, conducted RCTs have strict inclusion, exclusion, and predefined continuation and discontinuation criteria, making it difficult to extrapolate the data for use in real-world daily practice. This retrospective study aims to examine the safety and efficacy of adalimumab in daily practice over its 10-year use in psoriasis patients in a tertiary dermatology centre.

Patients with chronic plaque psoriasis and generalized pustular psoriasis were studied. Patients with pure psoriatic arthritis were not included. Treatment aim was to improve moderate to severe chronic plaque psoriasis. Biologics were indicated for patients with moderate-to-severe plaque psoriasis (PASI >10 or BSA >10%) who failed to respond or had contraindications to standard systemic therapy or phototherapy. Adalimumab was dosed at 80 mg subcutaneously at week 0, followed by 40 mg at week 1, and 40 mg every-other-week. This study was approved by the local institutional ethics review committee.

The primary efficacy was determined at 16 weeks, in line with other studies comparing efficacy; further progress and adverse events were monitored in patient follow-up through their electronic medical records.[2] Efficacy assessments included the proportion of patients achieving at least 75% reduction in PASI (PASI75) compared to baseline at week 16. PASI and BSA were not uniformly recorded after 16 weeks of treatment.

Fourty-five patients were enrolled, and background characteristics and demographics are summarized in [Table - 1]. Mean treatment duration was 46.1 weeks. Thirty-three patients (73.3%) were no longer on adalimumab at the time of data collection, with 14 patients (42.4%) citing cost as the reason for stopping treatment. 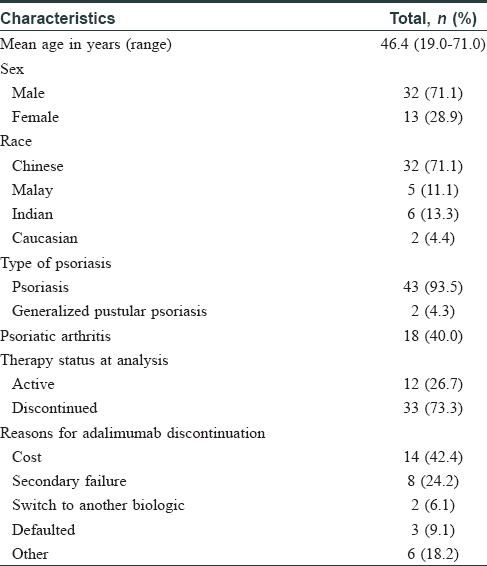 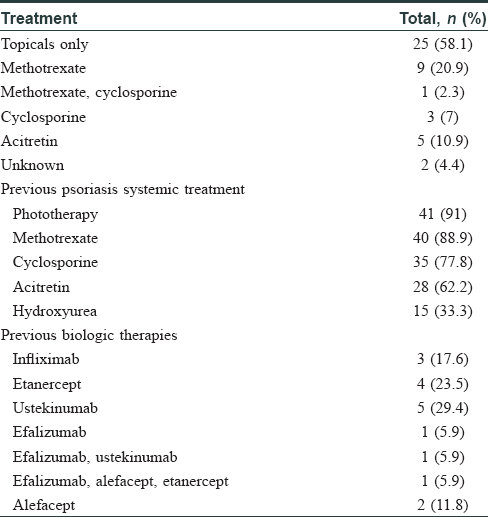 Table 2: Concurrent and prior treatment before adalimumab (n=45)

Five patients (11.1%) stopped treatment due to side effects: these include urinary sepsis, transaminitis, pulmonary tuberculosis (TB), and pneumonia [Table - 3]; of note, two patients developed TB. Both patients were self-funded on adalimumab, one being an Indian male who restarted adalimumab after 6 months of anti-TB treatment, and the other a Chinese female who discontinued adalimumab after anti-TB treatment. Three patients had reactive T-SPOT.TB test (after initial negative test) after treatment with adalimumab and were treated with isoniazid for latent tuberculosis infection. It is important to screen for TB, especially in South-East Asia, where TB risk is high with an estimated incidence of 36.9 per 100,000 population.[3] Compared to other biologics in our centre (unpublished data), 2 out of 10 patients were treated for latent tuberculosis infection prior to initiation of infliximab, and 11 out of 99 patients were treated for latent tuberculosis infection prior to treatment with ustekinumab. None of these patients developed pulmonary TB while on respective biologic treatment. As part of our biologic guidelines, we screen all patients on biologics annually with an interferon gamma release assay such as T-SPOT.TB blood test. 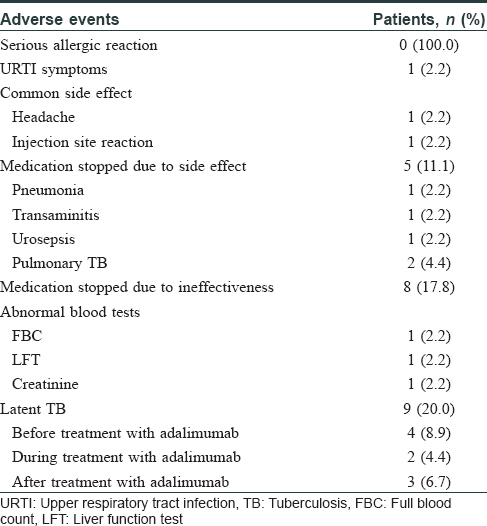 We were unable to find any previous reports reviewing the safety and efficacy of adalimumab in the treatment of psoriasis patients in Singapore. Our results show that 77.8% of the patients achieved PASI75 at week 16 of therapy, which is similar to other published reports.[2] One patient has been receiving adalimumab for 7.9 years, and is currently still on adalimumab with good response.

Overall, adalimumab proved to be relatively safe and generally well tolerated. It is important to screen for TB, especially in South-East Asia. All patients in our centre are screened annually with an interferon gamma release assay test.

Two of our patients with generalized pustular psoriasis who failed conventional therapy were treated successfully with adalimumab. Anti-TNFα therapy in psoriasis has been associated with worsening of psoriasis, erythrodermic flare, and development of palmoplantar pustulosis, but this was not observed in our study.[4]

Eight (15.6%) patients stopped adalimumab due to lack of efficacy, and the mean treatment duration was 24 weeks for nonresponders. These rates are similar to other randomized as well as open-label studies.[5]

Limitations to this study include its retrospective nature, no control group, and small study cohort. The PASI score was not uniformly recorded at every subsequent visit, and therefore, we were unable to compare efficacy with prolonged treatment. Adalimumab antibodies were not studied.

In conclusion, we demonstrate that adalimumab is effective and safe in the treatment of psoriasis and suggest important parameters to screen and monitor for in our population.