Clinical profile and impact on quality of life: Seven years experience with patients of alopecia areata

Background: Alopecia areata (AA) is the most common cause of localized, non-scarring alopecia. Stress and other psychological factors have been implicated in the causation of the disease, and it is also found to alter the course of the disease process. Unfortunately no one has studied the impact of AA on the quality of life, which includes the social life of the patients. Aim: To study the clinical profile and impact of alopecia areata on the quality of life, including the social life of adult patients with severe forms of the disease. Methods: The present study determined the clinical pattern of AA and its impact on the quality of life (QOL) in all the patients with severe forms of alopecia areata attending the Dermatology Outpatient Department. Results: The male : female ratio was 1.86 : 1. Most (58.03%) of the patients were between 21 and 40 years of age. Almost 40% of the patients had associated systemic disease or other dermatological disorders. A family history of AA was found in 593 (20.02%) of the patients. Nail changes were observed in 297 (10%) of the patients. There were significant differences between the mean Dermatology Life Quality Index (DLQI) score in cases with severe forms of AA and controls ( p0 < 0.001). Conclusions: Severe forms of alopecia areata had a major impact on the psychosocial well-being of the patients. These individuals had to be treated early, and they required more than just prescription drugs. Educational and psychological support in addition to medical therapy for AA could improve their long-term physical outcomes.
Keywords: Alopecia areata, associated diseases, quality of life, questionnaire

Alopecia areata is a common disease with an incidence of 2-3% among the dermatoses and 0.1% in the population at large. [1] This disorder occurs in both the sexes, at all ages, [2] and is characterized by the sudden appearance of areas of hair loss on the scalp and other hair-bearing areas. Alopecia areata in its severe form is a refractory condition to treat. About 10-42% of AA patients have a positive family history of the disease and it may be associated with autoimmune diseases, [3],[4],[5] atopy, Down syndrome, emotional stress, and focal points of sepsis. Hence, it is suspected to be an autoimmune disease having a genetic predisposition, and being influenced by environmental and ethnic factors. Despite recent advances in therapeutics, there is no evidence to suggest that drug-induced remission alters the ultimate course of the disease. [6]

Epidemiological studies of AA are available from USA, Japan, and European countries. [7],[8],[9] However, there is a paucity of data from the Arabian Gulf area, with only one published study [10] from Kuwait, done in the pediatric age group. However, AA is most commonly seen between the third and fourth decades of life.

Although AA is a medically benign condition, it can cause great emotional distress to the affected patients, and even their families. [11],[12] Despite the prevalence of AA and the general impression of the dermatologists, it can have severe psychological impact on the patients. [13] There are almost no studies available in the literature on the impact of the disease on the QOL of the patient. Also, little is known about how the QOL of AA patients varies with the disease severity.

In this study, we have studied the profile of patients with alopecia areata, its association with various systemic diseases, and its impact on the quality of life of new patients, with severe forms of AA, attending Dermatology Outpatient Department (OPD) over a period of seven years. The findings of the DLQI were then compared with the control group constituted by healthy volunteers of similar age and sex.

All the new patients with alopecia areata seen in our department between August 2002 and July 2009 were enrolled in this study. The study was approved by the hospital ethics committee, and conformed to the provisions of the Declaration of Helsinki. All the subjects enrolled in this study gave their informed consent. The diagnosis of alopecia areata was made by a qualified dermatologist on a clinical basis. Investigations like potassium hydroxide (KOH) scrapings, biopsy, and so on, were done in cases where the diagnosis was not straightforward. The clinical details including age, nationality, sex, age of onset, duration of the disease, family history of AA, site of onset, sites affected, precipitating / aggravating factors, associated diseases with special reference to atopic disorders, thyroid disease, or any other significant disease were recorded for all the patients. All the patients were examined, to determine the sites affected, the morphological pattern, extent and severity of the disease, and nail involvement. Screening was also done for autoimmune, cutaneous and endocrine disorders by history and clinical examination. According to the severity of affection the patients were classified into circumscribed and severe forms. The severe form included alopecia universalis (AU), alopecia totalis (AT), and extensive alopecia areata [more than 10 patches scattered all over the body, in addition to the scalp (> 40%) affection]. Routine investigations (including hemoglobin level, total and differential leukocyte counts, erythrocyte sedimentation rate, peripheral smear, and blood sugar) were conducted on all the patients. On their first visit, patients with severe forms of AA, of age ≥ 21 years, were given the Dermatology Life Quality Index (DLQI) questionnaire to fill up.

The Dermatology Life Quality Index questionnaire given by Finlay et al., [14] was used, which had a total of 10 questions related to symptoms, feelings, friendships, sports activities, family activities, clothing pattern, work, studies, sexual activities, and treatment. All the questions referred to the preceding week. Each question was answered by ′not at all′, ′only a little′, ′quite a lot′ or ′very much′. The maximum score for each of the 10 questions was 3, making a maximum possible score of 30. The validated DLQI score bandings used were: 0-1, ′no effect on QOL′; 2-5, ′small effect′; 6-10, ′moderate effect′; 11-20, ′very large effect′; and 21-30,′extremely large effect′. The mean total score of each questionnaire in patients with severe AA was compared with the mean total score of the control group by t test. The control group comprised of age- and sex-matched healthy volunteers, with no known chronic skin disease. The relation between the DLQI findings and the severity of AA was evaluated by the Pearson correlation test.

Out of the 2962 new patients with AA, there were 1926 (65.02%) males and 1036 (34.97%) females with a male to female ratio of 1.86 : 1. A majority (58.03%) of patients were between 21 and 40 years of age. The duration of the disease was found to be extremely variable. It varied from two weeks to several years [Table - 1]. More than two-third of the patients were greatly concerned about their disease and reported early (within six months of noticing the lesions). With most of them consulting within two weeks of developing the lesions, the scalp was found to be the most commonly affected site (68.6% of all the patients), followed by the face (22.34%). Ninety-one percent of all the female patients had scalp involvement. Four hundred and forty-seven patients (15.09%) had a severe form of the disease [Table - 3]. About one-third of male children (< 13 years of age) had severe forms of AA [Table - 2] and [Table - 3].

Table 1: Showing the distribution of patients according to duration of the alopecia areata

Table 2: Showing age distribution and gender of the patients with severe forms of alopecia areata 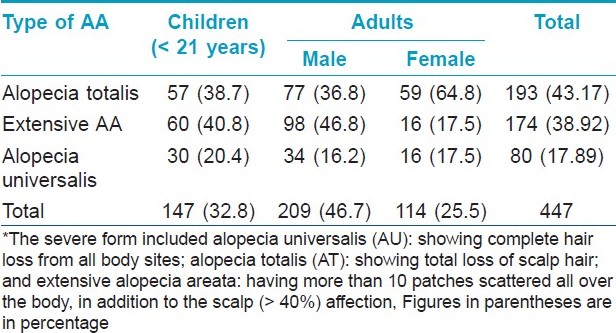 Table 4: The mean DLQI scores in patients (age ≥ 21 years) with severe AA and the control group were as follows

In agreement with most of the earlier studies, [15],[16] we observed a male preponderance (M/F : 1.86/1). According to our study, the boys had a significantly higher incidence (31%) of severe disease when compared to girls (13.6%). The scalp was found to be the most common site affected - in almost 70% of the patients, more so in female (91%) patients. Family members having AA were reported in 10 to 20% of the patients. [3],[17] Our figure of 20% was on the higher side. Many studies have reported an association between AA and atopy and between AA and autoimmune diseases. [17] Few recent reports [16],[18] have reported relatively higher percentage of association (46 and 60.7%, respectively) between AA and atopy. However, in the present study the percentage has been found to be 3.7% in our patients.

Quality of life is a broad concept and is concerned with whether the disease or impairment limits the person′s ability to fulfill a normal role, and it can be used to assess the burden of illness and the outcome of medical treatments. It is defined as the subjective perception of the impact on the health status, including the disease and its treatment, and on the physical, psychological, and social functioning and well-being of the patients. [19]

Quality of life (QOL) indicators are important in healthcare provision, in dermatology, for several reasons. [20] First, skin diseases are known to have a strong impact on social relations, daily activities, and the psychological status. This impact is more easily determined by the patient rather than by the physician. Second, the effectiveness of the treatment can be assessed by using QOL scores, in addition to physical assessment. Third, healthcare provision is getting expensive and patients with different diseases, including non-dermatological ones, may compete for the limited funding resources. Thus, expensive treatments or significant resources associated with the management of a particular condition are easier to justify in diseases that can be objectively demonstrated to impact significantly on the QOL.

There are several validated QOL instruments to measure the impact of skin diseases on QOL. [21] The Dermatology Life Quality Index (DLQI) is a dermatology-specific QOL measure that has been well validated, used in many diseases, and translated into many languages. [22]

Various skin diseases have been recognized as having a detrimental effect on the quality of life of the patients. This psychosocial aspect of a skin disease has important implications for optimal management of patients. [23] Although dermatologists and other clinicians have long recognized the impact of skin diseases on a patient′s life, it is only recently that quality of life measures have been used as assessment parameters in the management of chronic skin diseases and in the evaluation of new treatments. [24] Disease-specific indices of disability have been developed to record the impact of atopic dermatitis, psoriasis, and acne. [25]

One earlier study [26] available in the literature on the effect of AA on QOL has stressed only on the psychological impact of the disease. The index used to measure the disease did not contain indicators for the social disturbances. Very recently two more studies [27],[28] on this topic have been published, but both have a very small sample size. We, in this study have used DLQI, which also includes the social aspect. We have found that in all the patients with severe forms of AA, the disease not only has a severe psychological impact, but also causes a marked disturbance in the social life of the patients, forcing them to change their hair style, alter the type of clothing, and avoid social meetings. Hence, we feel that in addition to medical treatments, patients with severe forms of the disease need some kind of counseling, to negate the ill effects of the disease on their psychosocial well-being. Moreover, the efficacy of any treatment must also consider the improvement in QOL, and not just see the percentage of hair re-growth. This is because there are many patients with significant, but patchy hair re-growth after treatment, who do not show comparable improvement in the DLQI scores.