Community-acquired methicillin resistant Staphylococcus aureus (CA-MRSA) has emerged as a significant human pathogen during the last two decades. [1] It usually causes skin and soft tissue infections in young and previously healthy individuals. [1],[2] Baseline MRSA carriage has been identified as a significant risk factor for infections caused by it. [3] Poor living conditions, damaged skin surfaces and sharing of contaminated materials can increase the risk of community-acquired MRSA infections. [3] Our report profiles the clinical spectrum and antimicrobial resistance pattern of skin and soft tissue infections caused by community-acquired MRSA.

This cross-sectional study was conducted during November 2012 - December 2013. Subjects were recruited from a tertiary care hospital in coastal Karnataka, from the dermatology outpatient department as well as from the inpatient wards. The study was approved by the Institutional Ethics Committee and informed consent was obtained from each patient. Pyoderma was diagnosed on the basis of clinical examination and investigations. The infection was considered to be community-acquired as per the CDC case definition, which includes any MRSA infection diagnosed in the out-patient setting or within 48 h of admission to the hospital, in the absence of the following: hemodialysis, surgery, hospitalization or admission to a skilled nursing facility during the previous year, the presence of indwelling medical devices, or previous isolation of MRSA from the patient.

In every patient, pus/exudate and swabs from anterior nares were sent for microscopic examination and culture. Standard bacteriological methods were used for the isolation and identification of MRSA. Methicillin resistance was confirmed by cefoxitin (30 μg) disk diffusion method, inducible clindamycin resistance was detected by the D-test and antibiotic susceptibility testing was done using Kirby-Bauer disk diffusion method. Interpretation of the results was done as per CLSI 2013 guidelines. 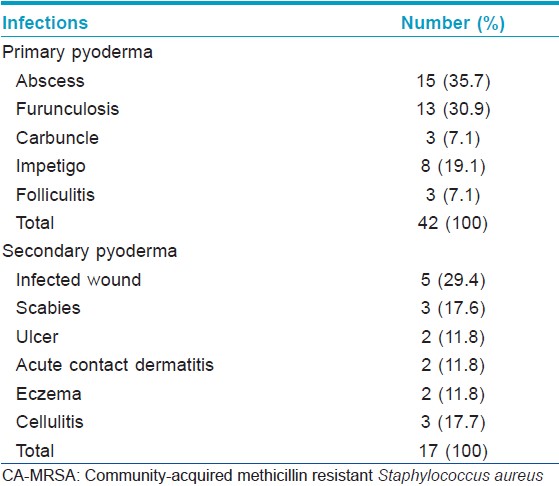 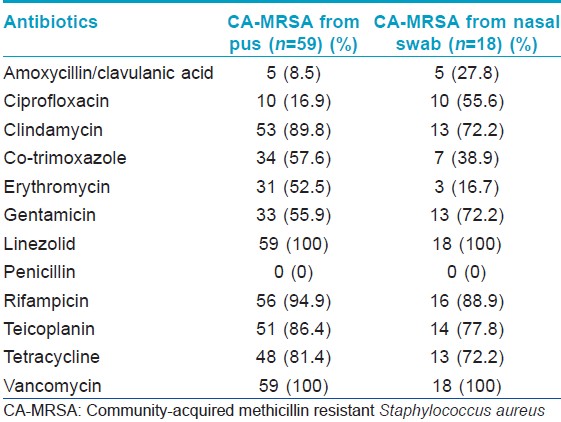 The present study shows that community-acquired MRSA is an important causative agent of pyoderma. The significance of this pathogen in community acquired skin and soft tissue infections has been highlighted in previous studies as well. [2],[4],[5] The present study showed that primary pyoderma is more common (42/59) compared to secondary pyoderma (17/59). A recent prospective multi-centric study has shown that skin and skin structure infections among adult patients without any health-care contact are commonly caused by community-acquired MRSA. [5] Basal nasal carriage was observed in 8% of patients and this could be one of the risk factors for pyoderma. All the isolates were susceptible to vancomycin and linezolid. Inducible clindamycin resistance was detected in 16.9% of the clinical isolates and 33.3% of the nasal isolates by the D-test. Community-acquired MRSA strains exhibiting inducible clindamycin resistance appear susceptible to clindamycin on routine antibiotic susceptibility testing by the Kirby-Bauer disk diffusion method. If clindamycin is used for treatment in these cases, it will result in treatment failure. Therefore, it is important to perform the D-test to detect inducible clindamycin resistance in all isolates of MRSA that appear susceptible to clindamycin in the routine test. The virulence factors of community-acquired MRSA influence the pathogenesis of infections caused by this organism and further studies on their molecular properties are warranted.

Authors are thankful to Manipal University for providing scholarship to VEJK. The authors express sincere gratitude to Dr. Kashinath Nayak, Assistant Professor and Dr. Sudarshan, Postgraduate at the Department of Dermatology, Venereology and Leprosy, Kasturba Medical College, Mangalore for their immense support in collecting clinical specimens from patients.