Pyoderma, defined as any purulent skin infection, constitutes a major proportion of the case load in dermatology clinics.[1],[2] While antibiotics are effective to control them, their overuse triggers the spread of resistant strains indicating the importance of culture and antibiotic sensitivity studies. Hence, we carried out this study to determine the etiological agents and antibiotic sensitivity pattern in patients presenting with pyoderma to our tertiary care institution.

After receiving clearance from the Institutional Ethics Committee and obtaining written informed consent from individual study subjects, the patients who attended the dermatology department of Government Medical College, Kozhikode with pyoderma during a period of 1 year from March 2012 to February 2013 were included in the study.

Patients with pyodermas irrespective of their age and gender were included while those who were treated with topical or systemic antibiotics during the 1 week period prior to their attendance in the outpatient department were excluded. A preset proforma was used to collect data regarding population characteristics, disease duration, history of intake of immunosuppressants, associated diseases such as diabetes, malignancy, other immunosuppressive conditions, previous history of similar illnesses in the patient or family members and details of previous laboratory investigations. Pus samples were inoculated on blood agar, MacConkey agar, salt agar and glucose broth and incubated overnight at 37°C and isolates were identified based on biochemical tests. Antibiotic sensitivity testing was done by Kirby–Bauer disc diffusion method on Mueller Hinton agar/blood agar as per Clinical and Laboratory Standards Institute (CLSI) guidelines and interpreted according to CLSI criteria.[3]

During the study period, 162 patients who attended our department satisfied the inclusion criteria; of these, 106 (65%) suffered from primary pyodermas and 56 (35%) from secondary pyodermas. Male to female distribution was 1.8:1 (105 vs. 57). The most common age group affected was below 10 years. Infections were more prevalent during summer. Predisposing factors such as diabetes mellitus, atopy and immunosuppressive medications were noted in 23 (14.2%) patients. Only 6 (3.7%) patients had an affected family member.

Impetigo was the most common primary pyoderma followed by folliculitis [Table - 1]. Gram stain of the direct smear from pus showed Gram-positive cocci in 150 (92.6%) and Gram-negative bacilli in 9 (5.5%). Staphylococcus aureus was isolated from 136 (83.9%) cases and was the most common isolate in both primary and secondary pyodermas. Streptococcus pyogenes and Pseudomonas aeruginosa were the second most common isolates in primary and secondary pyoderma, respectively. Antimicrobial sensitivity studies [Table - 2] showed that S. pyogenes were highly sensitive to penicillin (100%). On the contrary, a high degree of penicillin resistance (86.8%) was documented among S. aureus strains but most of them were susceptible to cefazolin, gentamicin, co-trimoxazole, amikacin and vancomycin. Of the S. aureus strains, 19.1% were methicillin-resistant and this contributed to 26 (16%) patients of the total case load. 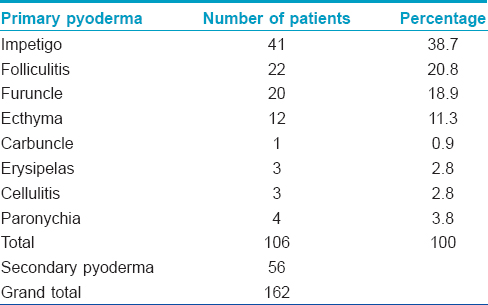 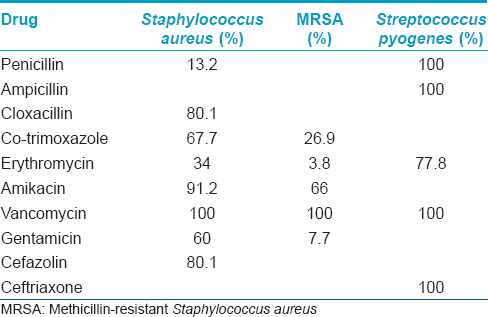 Preponderance of primary pyoderma and a higher predilection in children were documented in our study, consistent with previous reports.[2],[3],[4],[5],[6] Majority of the affected were students (63,39%) and manual laborers (40, 25%). The higher prevalence of pyoderma in children could be explained by the lower levels of hygiene and increased risk of trauma associated with young age. The male predominance observed in our study was documented by others and is attributed to the increased exposure to microbes during outdoor work.[2],[4] Our finding of impetigo as the most common primary pyoderma was in concordance with other studies.[7],[8] Our observation of a higher occurrence of pyodermas during summer season was supported by Mathew et al. and Kakar et al.[7],[8]

The common pathogens isolated in our study (S. aureus followed by S. pyogenes) were similar to those reported previously.[9],[10],[11],[12],[13] One disturbing finding that emerged from this study was the very high (86.8%) prevalence of penicillin-resistant staphylococci. Though an increasing incidence of resistance to penicillin has been reported by various researchers across the world, it usually varied from 80% to 100%.[9],[13],[14] The antibiotic sensitivity pattern, including 100% sensitivity to vancomycin reported in our study was similar to earlier reports.[3],[15]

A higher prevalence of pyodermas in children is of significance as they are more susceptible to systemic complications such as glomerulonephritis. The rising prevalence of diabetes mellitus can complicate cutaneous infections and contribute to antibiotic resistance. We recommend routine pus culture and sensitivity tests in pyoderma to identify the commonly prevalent pathogens and to aid in the judicious and rational use of antibiotics.